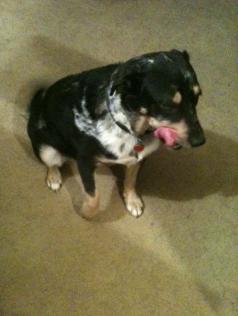 Who would a thought a dog bite could cause all this?

It’s took a little bit to get back here, but I finally made it! We have had so many happenin’s here at our place! I’m gonna start with this one. Seager hurt his leg the other day. We really thought he broke it! It sure swelled up mighty big. And, he couldn’t walk on it at all!

It all happen’d on a Friday night. That’s not good round here. In this little town there ain’t no vet on the weekends and no emergency place either. Imagine that! All my Lady could do was call ’em up to find out what to do. She had some kind of pain pills for him left over from his heartworm ordeal. Anyways, they told her to give him those until Monday. Boy, that was one long weekend!

Oh, but I forgot to tell ya that Seager got in a fight Friday mornin’ with that big ole stray German Shepherd Cooper! That was a sight! All that snarlin’ and snappin’ and the fur was a flyin’! My Lady and Man had to get ’em apart with long sticks! And by the way, the stray didn’t start it! He was just defendin’ himself. Seager has took a a notion he don’t like him none. Seager was a winnin’, but I think Cooper was lettin’ him! Anyway, they got ’em apart and Seager back in the house. Neither one was a bleedin’ no where 🙂 We thought that was the end of that round.

So, back to what I was a tellin’ ya! Finally, Monday came and Seager could go to the vet. After a couple of xrays, blood work, and an exam – there weren’t nothin’ broke. But, what they did find was bacteria in his blood stream and pair of matchin’ holes round his ankle! They were so teeny tiny you could hardly seen em! Ummm! I guess Cooper got the last word, or bite, in anyways WOOF! The vet lady said there was bacteria spreadin’ from the saliva in that tiny little bite. It was confusin’ cause no one could see anything when it had happened. It was later that night when it swelled up and he couldn’t walk on it – all of a sudden like! Anyways, Seager got a shot of Penicillan, some antibiotics to take, and some kind of anti-inflammatory medicine. By the next night, his ankle started oozin’ some kind of yuck. But, that helped it to start goin’ down. Who would think a dog bite would cause all that? 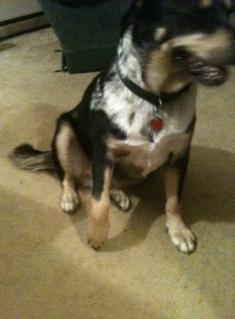 Now it has been a couple of days, and he ain’t limpin’ no more. He is up and runnin’ again! He still has to finish his medicine though. Didn’t teach him nothin’! Cooper came up again the other day. Well, Seager saw him out there through the glass door. Ya know, I think he is really mad at him now for causin’ all that pain with that dog bite! I thought he was gonna bust through door to get him!

Us girls just sit and watch. Like what’s all this fuss about?! Cooper ain’t mean or nothin’ But Seager sure don’t like him none!! My Lady sure has a mess around here! We still haven’t found anything we can do about the strays. Bein’ in the country, ain’t nobody willin’ to help. She keeps a callin’ that shelter, but they are full up! Meanwhile, she’s still gotta worry about the other stray with all them puppies! That’s a whole nother story comin’ 🙂