Diabetes in dogs is somethin’ we had never thought about, but it has left it’s mark this past week. We have had to say goodbye to our cousin Chopper. He was an old guy, but he was always friendly with everyone. Everyone loved Chopper! He always was a big couch tater and as you can see – snoozin’ was his favorite pastime! But, Chopper started actin’ funny – not eatin’ or drinkin’. When Chopper stops eatin’, it’s time to go see the vet for sure! So, his human people took him for a vet visit. They thought his allergies were gettin’ him down, so they gave him some medicines to take.

Chopper snoozin’ on the couch 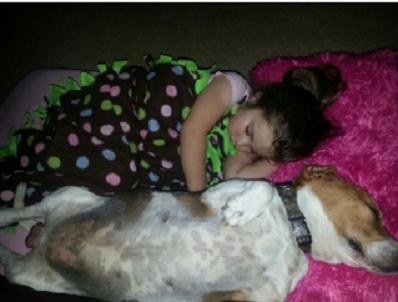 After gettin’ home and a few days later, he still wasn’t eatin’ or drinkin’ anything, they got really concerned! They took him back to the vet. This time they did some blood work on him and found out he had diabetes. They said diabetes in dogs was fairly common. All we know is, Chopper was in a really bad way. They kept him that day and put him on an IV to try and get his blood straightened out. By morning, he was not showin’ any improvement.

Later that afternoon, he was still not improvin’ and and his eyes were glassin’ over. It was apparent that he was not gonna come out of it. His human folk went to see him and made the decision to not let him keep on a sufferin’ the way he was.

Here’s some information on Diabetes in Dogs:

Diabetes (diabetes mellitus or sugar diabetes) is a common disease in some dogs. Even though some breeds get it more often, all breeds can be affected. It happens more commonly in females than males, usually between 6 to 9 years of age.

Signs of Diabetes in Dogs

Some of the signs of diabetes are drinkin’ a lot of water, urinatin’ frequently, big appetites and unexplained weight loss. If you check the blood and urine, you will find high glucose levels.

If it is not treated, they lose their appetite, become lethargic, vomit, have weakness, become dehydrated, and can go into a coma. Cataracts are also common in dogs with diabetes. Diabetes will affect all their organs. Their livers will be enlarged and they often develop neurological problems.

How Diabetes in Dogs is Treated

By using daily injections of insulin and dietary control most diabetic dogs can be regulated, allowin’ ’em to lead active, healthy lives. They will need to be on a strict diet and insulin schedule. The insulin injections and feedin’ should be done at the same times each day.

If your dog is overweight, it will make this condition hard to control and reduce the responsiveness to the insulin. they will be needin’ a high-fiber, high-carbohydrate diet until they reach a good weight. Your vet will have the best advise for you on insulin and diet plans.

Hopefully, this will give you a few things to be a watchin’ for and an understandin’ of what it is.

Now, we would like to say a final goodbye to our “Chop Chop”. We all loved ya and you will be missed terribly. But, sweet Layla and Sadie girl will be there on Rainbow Bridge a waitin’ to see ya again and play!