Recently, there was a story on that place called Facebook that shared a study about how dogs think like human folk. Ummm. Duh! My Lady and I laughed that someone spent lots of time and money to learn that dogs are like humans, since we already knew it. We understand my Lady when she talks to us, even though them pups have selective hearin’ sometimes! But, I couldn’t help myself. Curiosity got me. I tilted my head and followed along with the thread of discussion. Then, I went to investigate.

Here’s what I found.  A scientist taught eleven dogs—nice sized pack—to do a really long sit-and-stay inside a big machine.  The dogs wore a ridiculous cap thing (I’m a might embarrassed for my species here) on their heads, not the cone of shame from going to the vet. The cap was connected to equipment that showed how their brains worked when they heard barkin’ and talkin’, whinin’ and cryin’, all sorts of voices. 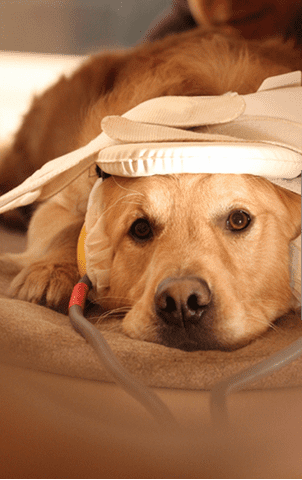 Again, not surprised, and neither are you.

Not only are dogs like humans, but this proves that research is like a strong stink.  A strong stink means you want to investigate and find the source. Same with research. So, I looked up the Humanbook article and found the original place the study was published, Current Biology. Research studies, even obvious ones, should be reviewed in their original publication. This one appears to be sound (though exceedingly silly) human science: methods—how to’s, numbers, lots of big words, and conclusions—what was learned.

We dogs just keep it simple. Sniff, think, know. We don’t have to do long a sit-and-stay to prove we have big hearts and love our people. I could a told them researchers that dogs are like human folk for a couple of biscuits and saved them a lot of time. WOOF!

The money wasted on all of these studies is absurd. It can be put to use elsewhere.