Woof! Woof! After 60 days of hard time, Seager is out of jail! After bein’ cooped up so long he was a rippin’ at the seams to go!! It was so excitin’, we couldn’t hardly figure out what to do first! Looks like he is on the mend from them nasty heartworms he had. Since his treatment started, he could only go outside on a leash. I just can’t imagine. He still has to take it easy and can’t stay out long at a time, but hey – we’ll take whatever we can get!

We all headed out, but stopped to discuss what we wanted to do first. Seager and me started gettin’ impatient, so we left Sallie and Maggie to figure out the game plan. We went on and started a game of tug-o-war. We weren’t gonna waste a second of our time standin’ around yackin’ about it!

While Seager and I went on and started playin’ tug-o-war, Sallie and Maggie discussed a while longer. Then, they decided to play too. Sallie never plays to awful long. She is gettin’ on up there in years and just don’t have the energy for it I guess. Plus, she gets so darn bossy about it all. She starts yappin’ and carrin’ on at everybody! 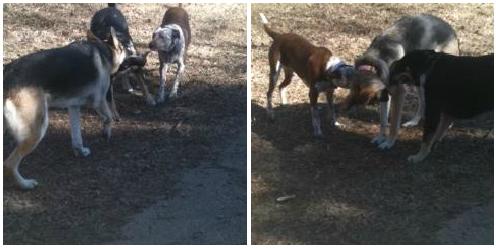 Well, in the end, Sallie got tired as usual, and Maggie came and joined us. We had a 3-way tug-o-war goin’ on! I can say one thing – Seager has been on steroids for his heartworms for a while and he is one strong dude! He was a yankin’ all of us around! It’s a good thing he gets to stop takin’ ’em or we would all be in trouble! We spent that whole trip playin’ tug-o-war and chasin’ each other.

But then, my Lady said play time was up. We all had to go in for our afternoon naps 🙁 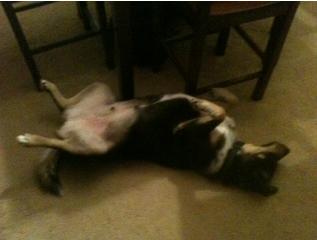 We all went in and had a chew treat. Then, it was nap time. I guess Seager was real tuckered out! He went over by a table, rolled up on his back, and went immediately to sleep. He was snorin’ and sputterin’ so loud, I had to go to a different room or I would never get to sleep!

I went on to my bed in the bedroom. I was anxious to dream up a new game for us to play on our next trip out. I like playin’ with Seager and we sure have missed him! I know he missed it! He would sit at the back door and watch us. That sure was a hard 60 days he had to do!