We had quite a night ’round here last night! We were havin’ a quite night until it all broke lose! At first, I thought someone done started shootin’ at us! Right behind that, we had a strange visitor! My Lady always says that things happen for a reason and well, I guess that’s what happened here last night. Lemme tell ya the story!

Even though it was really late, my Lady was a cookin’ in the kitchen. She had a roast in the oven. She was a cookin’ it up in one of those big glass bakin’ pans. She always puts it in an oven bag with taters, onions and carrots – yep it was a smellin’ right good! Of course, when she went to take it out of the oven ya know we were all gatherin’ ’round to get us a good whiff and secretly hopin’ for a taste! WOOF! Anyways, in her hurrin’ to get the oven door shut ‘fore one of us could touch it, she set the roast on top of the stove. Here’s where it gets scary!

She didn’t know she had hit the button and made the burner come on under the glass pan. But then, she started askin’ what’s that smell? Yep, the roast was a scorchin’! She grabbed some of them pot holder thingys and moved the glass bakin’ dish over to the other side of the stove. She was a carryin’ on ’bout her scorched roast and THEN – YIKES!!!! The glass baking pan exploded like a bomb! It sounded like a really loud shotgun done went off, glass was a flyin’ and I thought I was dead for sure! Glass went everywhere! My Lady screamed, we barked and you ain’t never saw so many pups runnin’ from a kitchen at one time!

No one was actually hurt, but my Lady was upset over losin’ her roast and the HUGE mess. I thought she was gonna cry. It scared me so bad, I got my tummy all upset and upchucked. Anyway, my Lady helped me first and cleaned up my mess and then tackled the mess in the kitchen. That glass, and mess, had shot all the way over and was in our water bowl! We have one of them there big Neater Feeder water bowls so she decided to take it outside so she could use the hose to clean it up. That’s when the night took another strange turn! 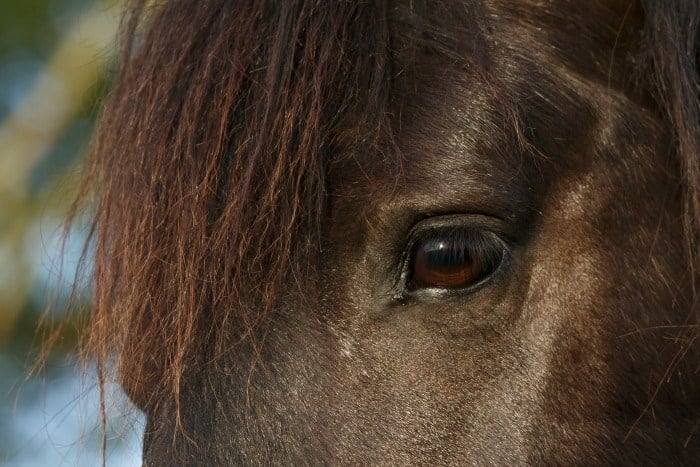 My Lady is known as the dog lady cause she helps take in so many pups, but we’ve never had a horse visitor before! She said we are equipped to deal with dogs and maybe cats, but the horse is a bit on the large size and we had to find somewhere for him to go. Well, all we had were dog leashes. So, she used those to hook onto that contraption he was wearing on his head. Us pups in the house didn’t like that big critter out there so close to our Lady! He seemed nice enough, but ya never know WOOF! My Lady set about brushin’ on him to calm him down and then called up the Sheriff’s department to come help. Yep, more excitement WOOF!

They finally got here and they helped in callin’ up all the known horse owners ’round here. Good thing we live in a little rural area! They finally landed on one and that thought the description fit his neighbors horse. By now, we are gettin’ on close to midnight, but the nice man went and got his neighbor and they came. Sure ’nuff! It was his horse! My Lady was sure relieved cause she didn’t know what on earth she was gonna do with a horse, especially round all us pups that weren’t takin’ so kindly to him! The men gathered up the horse and left. The horse left with a loud whinny, as if he was sayin’ bye and thanks for the bruishin’ to my Lady!

So, if’n ya think about it, that mess in the kitchen from the exploding baking pan happened for a reason! If it hadn’t of happened, my Lady wouldn’t have been outside that late and wouldn’t have been there to collect that poor lost horse! He could a gotten killed on the road and probably caused an accident for humanz too! My Lady didn’t seem to mind the mess so bad after that. I’m still a tryin’ to wrap my head around it. I’m all for helpin’ out the horse critter, but I didn’t get to taste no roast and on top of that it scared me so bad I lost my lunch too! This was just to much excitement for this country pup!

Somehow all the critters know to come here for help. I’m still a tryin’ to figure that one out too! I think the spirit of my Lady’s Sadie is still directin’ all the lost and homeless animals here! Yep, Sadie helped me get here and I think she’s still at work! WOOF!