Well, it seems we have another addition to our stray dogs! That Coop sure gets around! Now he’s done went and brought another furbaby son home with him! My Lady looked up the other day to see him a comin’ cross the yard and thought it was Little Momma with him. Them ears on his friend were a tryin’ to stand up and flyin’ out like airplane wings! That weren’t Little Momma for sure!

He brought him right on up here and showed him one of the outside water bowls! He dipped on in and drank his fill. And, just look at Coop’s eyes! Could you resist em? They melt my Lady every time Woof! 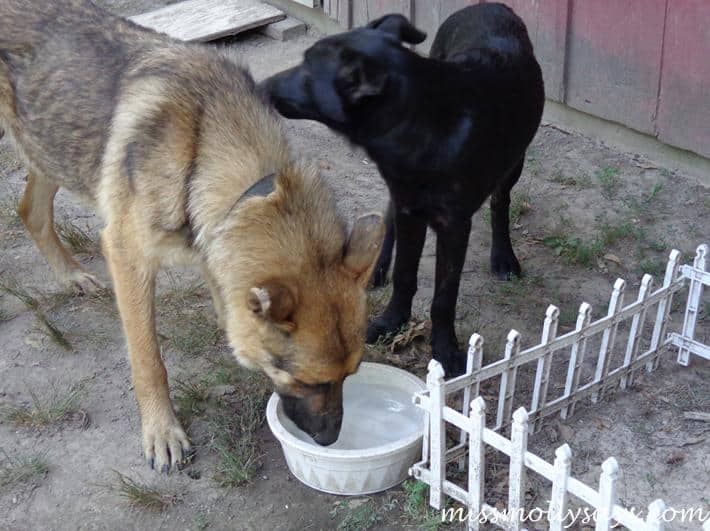 Then the new feller went to lookin’ ’round like – what now Dad? Where’s that good sleepin’ spot you told me about? 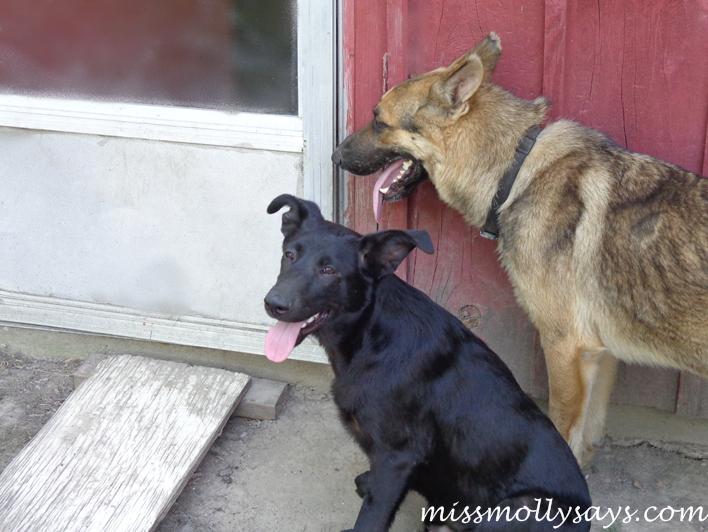 By then my Lady had caught up to em. Coop knows how to open the door to the mancave aka “the stray dog cave”, but he was a standin’ there a lookin’ like he was gonna be in trouble for bringin’ him home. I guess he was a waitin’ to see if he could bring him on in or not. Well, y’all know my Lady – she just can’t say no to a furbaby. She let Coop bring him in. 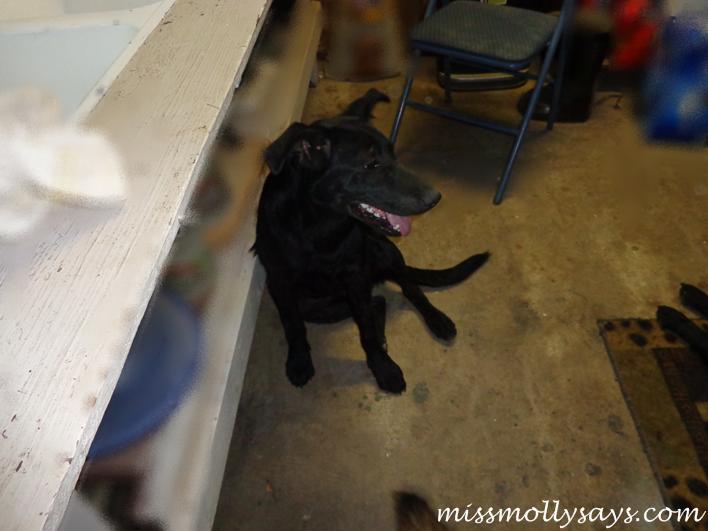 Once inside, my Lady looked him over. He’s a young feller, probably not more than 4 or 5 months old by the looks of his teeth. That Coop sure is protective of him too! The new guy just looked around a bit. 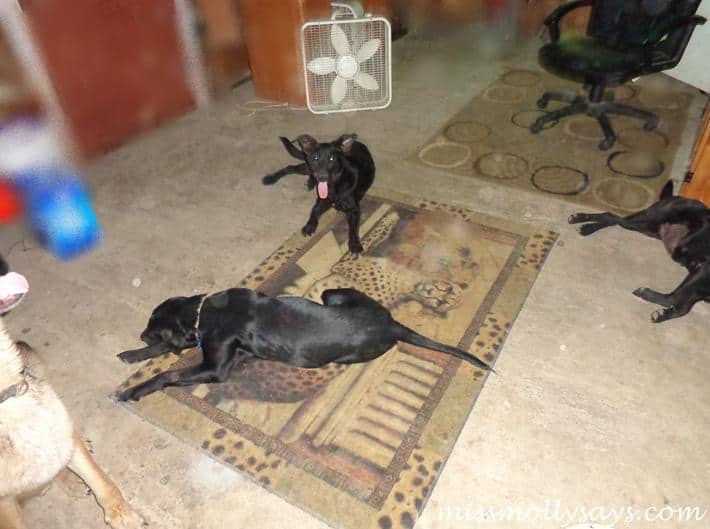 After a helpin’ himself to some viddles, he spotted the fan. He went right over and plunked down right in front of it! Look at him a grinnin’! Little Momma and Little Girl were already in there and passed smooth out! My Lady had the air conditionin’ runnin’ so it was feelin’ pretty good in there! 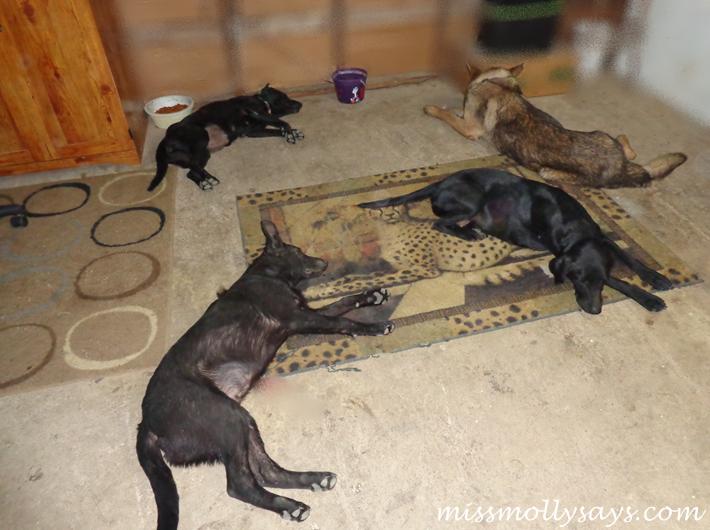 Woof! Woof! Look at him! I guess he liked it in there. Poor little feller was plum tuckered out! He laid down and went smooth on to sleep! Them stray dogs are livin’ mighty high on the hog for strays! 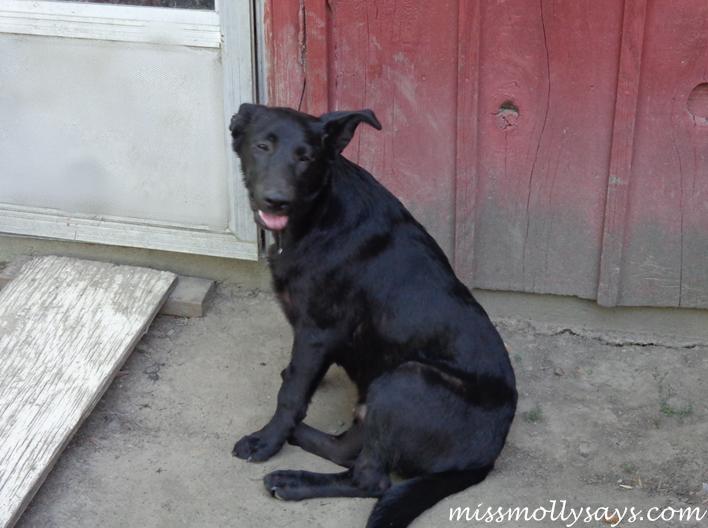 After they all woke up the others took off to wherever they go, he stayed around a while. He just hadn’t figured out how to open the door yet. He was waitin’ on someone to open it for him. Since then, he has figured how how to bump it and make it come open.

Yep! Seems he is part of their pack now. I’m a guessin’ that means we have 4 stray furbabies now. We call em our strays cause we feed em and give a place to sleep with a fan. At least it cools em off and keeps them sqitters off of em a bit. Strays seems to come and go round here quite regular, but these have stayed around a long time now. They are the ones that their owners up and moved and left em here about a year ago.

My Lady takes care of em with food, water, a nice place to sleep and she puts stuff on em to keep them flea and tick critters off of em.

She says her grandmama use to feed what you call ‘hobos’ that came from the train that passin’ thru. They would sit on the front porch and eat their plate of food she fixed for em. Some of em even lay back on the porch and rested their eyes a bit ‘fore movin’ on. But, them hobos were always polite and very thankful, kinda like the stray dogs.

My Lady always helps stray dogs out at least with some food and a place to nap, even if they are a movin’ on. A little kindness never hurt nothin’. But be warned! If ya feed a stray they might just stay! Look at me! I gots to stay and move right on in the big house WOOF! WOOF!