We are making it through Fall here and my Lady and some of my brothers and sisters are feelin’ poorly. They have them things called allergies and my Lady says they are bad during this time of year. She gets all weepy eyed and sneezin’ and Ozzy does some strange kind of sneeze that my Lady calls a reverse sneeze. Sallie gets to itchin’ and scratchin’ to high Heaven and even my eyes have been itchin’ and runny. So, I talked my Lady into one of them there Venta Airwasher Purifier and Humidifier machines for the bedroom like she’s got in the livin’ room. After all, us pups and her sleeps in there and we were all a wakin’ up a snortin’ and a sneezin’! WOOF! 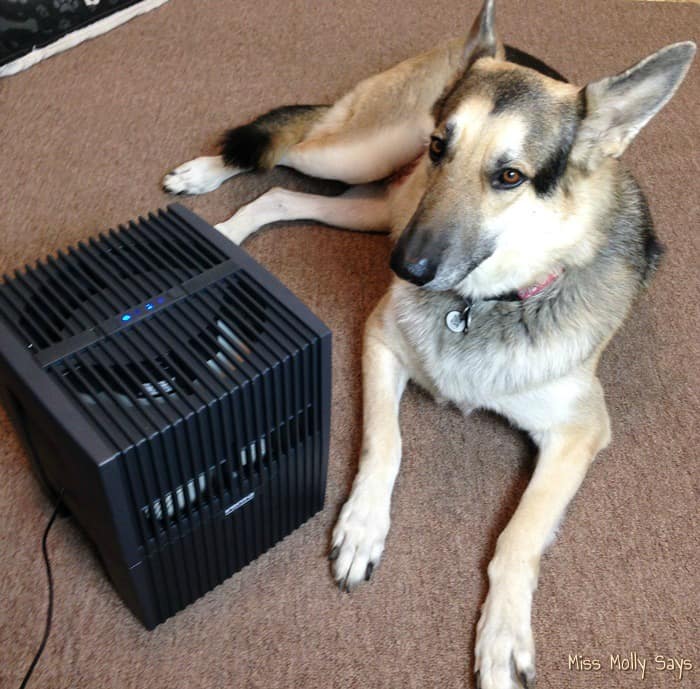 We needed somethin’ that would wash and clean the air, plus humidify the room we were all a sleepin’ in. Dog gone it! I wanted my own Venta Airwasher so I could get a get a good night’s sleep and wake up feelin’ spry — not all tired, worn out, and watery eyed! WOOF! I don’t know ’bout all the particulars of the Venta Airwasher, so I better get my Lady to tell ya ’bout it…

While humans can certainly be allergic to pets, did you know that pets can also have allergy problems of their own? The most common allergies in dogs are airborne such as pollen, grasses, trees, dust mites, and mold spores (sounds like my allergy list!), food allergies, and flea allergies.

Airborne allergies appear as itchy irritated skin in dogs. If you remember, our dog Sallie has suffered from these allergies all her life. It can be severe at times, especially in the Spring and Fall, with big sores and hair loss! Ozzy has a problem with reverse sneezing, which is also a sign of allergies. He also has frequent ear infections, another tell-tale sign of allergies! If your dog is scratching, licking, or has frequent ear and skin infections, this could mean they are experiencing allergy symptoms.

Treatment for a pet experiencing allergies is much like they are for humans including: medications such as antihistamines and other allergy medications, frequent washing of their bedding, and avoidance of the allergen and managing the environment by removing as much of the allergens as possible.

One of the places in our home where the dogs spend a lot of time is the bedroom. All 7 dogs and dog beds are piled around in one tiny bedroom with us. After playing outside in the dust and pollen, they come in and crash onto their beds in one small bedroom with us. Tell me that isn’t a lot of allergens going on! So, Molly’s request for a Venta Airwasher for the bedroom made sense to me.  I needed to do something about the air quality in our bedroom to fully help with the allergy problems! I already knew how amazing the Venta Airwashers were because I had one in the living area of our home where I spend a lot of time. I wanted to try the LW15 Venta Airwasher, which is smaller (covers about 200 sq. ft.), to help cleanse the air in the bedroom. Not only would it help me, it would help the dogs allergies and itchy skin.

About the LW15 Venta Airwasher

The LW15 Venta Airwasher is the most compact, small humidifier and best room air purifier on the market. The LW15 Airwasher contains their most advanced technology to remove dust, particles and allergens from the air we breathe. This filterless humidifier and dual-function device cleans indoor air making it the best humidifier for baby rooms, living rooms, kitchens and bedrooms. Their filterless technology reduces mold and waste, along with other additional life changing air purifier benefits. The Venta Airwasher brings new meaning to, and appreciation for, personal space. Their Airwashers were designed with advanced technology and German engineering, making them the best room humidifiers and purifiers on the market.

When our new LW15 Venta Airwasher came in, I was excited to get it set up and running! I think the pups were too! I had a couple of helpers to help put it together.

Setting up the LW15 Venta Airwasher 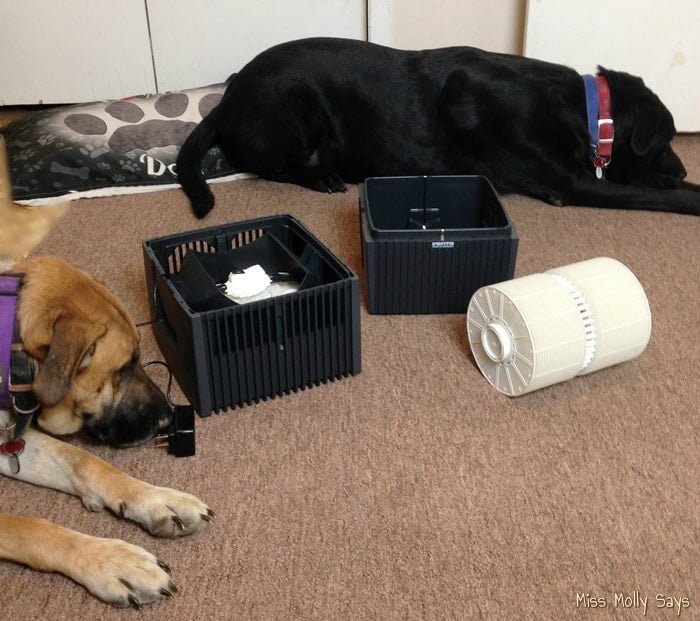 Setting up the Venta Airwasher is easy! Start by removing the upper housing by lifting it off. Set it aside for now. On the inside you will find the disk stack. You don’t have to remove this, I just wanted to show you the parts. The pups relaxed while I went to get some water and the water treatment additive. 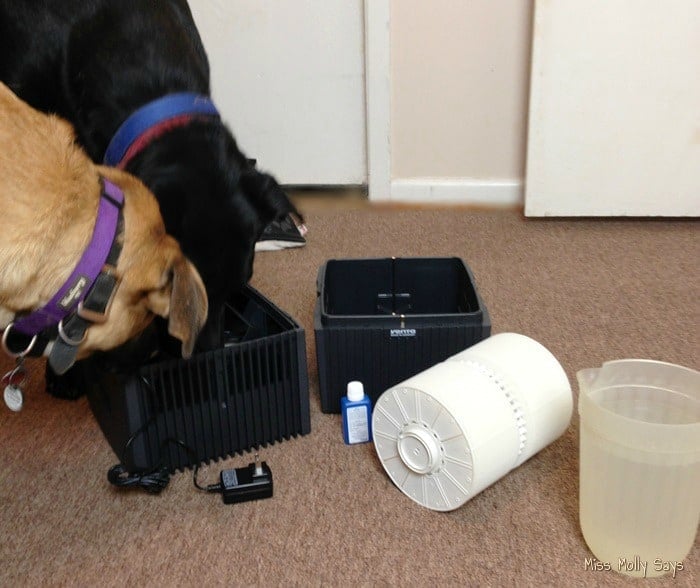 When I got back, I found the pups checking out all the parts of the Venta Airwasher. They seemed very interested in the fan in the top housing of the unit. 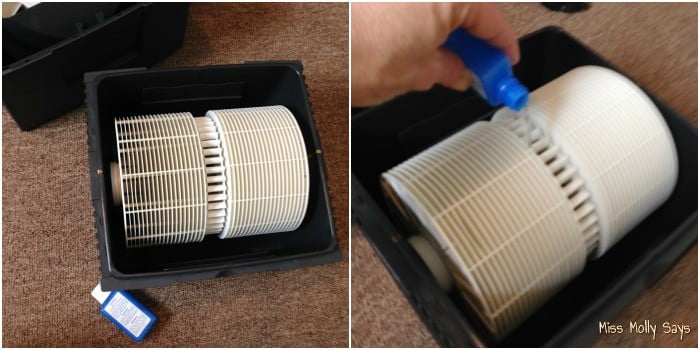 The water additive does NOT need to be added everyday when you add water. It only needs to be added when you clean the unit (every 10-14 days). More on the cleaning of the unit below. 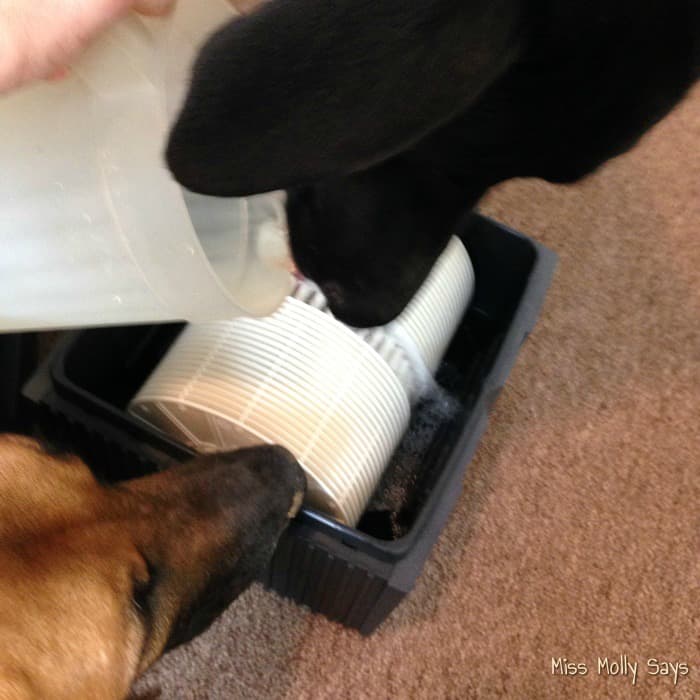 Continue by adding water to the lower reservoir. The helper pups are still helping, or getting in the way, whichever you prefer! Ozzy decided he wanted to taste the water as it was being poured! I had to refill my pitcher again to completely fill the Venta up to the maximum fill line. The LW15 holds a little over a gallon of water.

One word of caution here! You can add the water and the water treatment through the disk stack. However, NEVER pour water or other liquid through the top housing and fan! 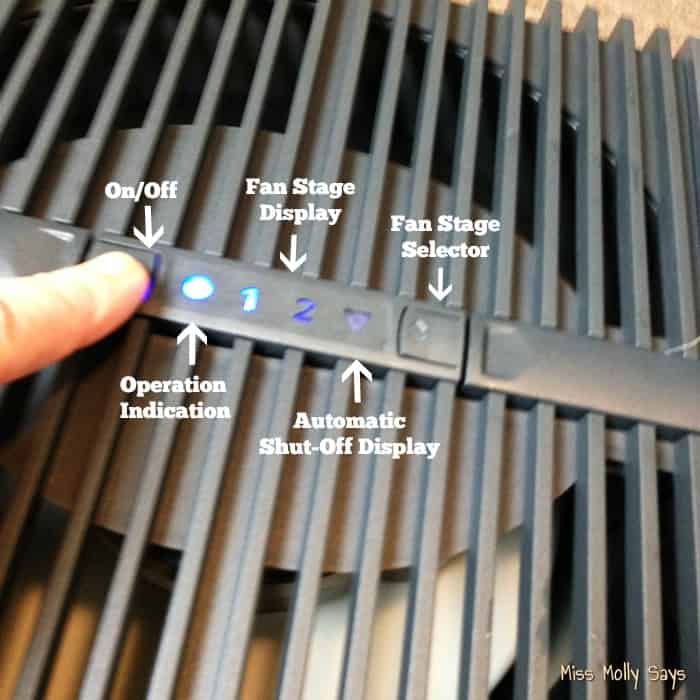 The LW15 Venta Airwasher controls are located on the top of the unit. They are very simple and self-explanatory. You can see from looking at the picture above, that I have the unit “ON” and my fan speed is on ‘1’. The LW15 Venta Airwasher offers two fan speeds — “1” and “2” (high and low). While this pic was took with it on fan speed “1”, I run mine on “2”. I figure I need the highest, strongest setting available to tackle the bad air quality problems in my bedroom!

The Venta Airwasher also has an automatic shutoff. When the unit runs out of water, it will shut itself down. So far, mine will run a couple days without adding water to it. 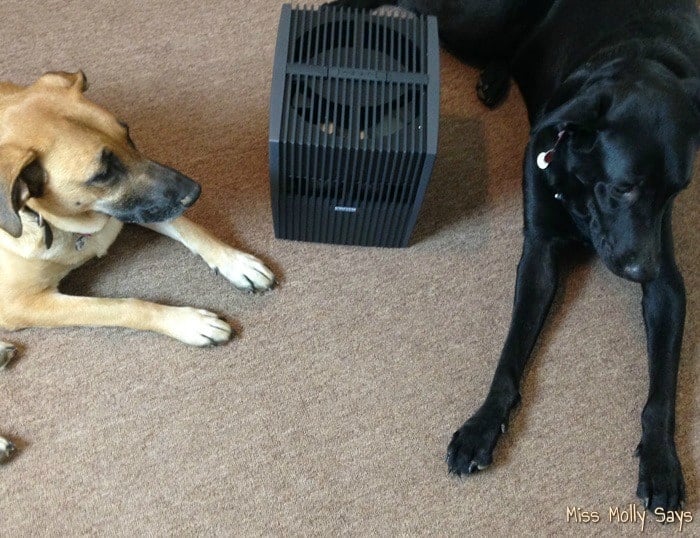 Well, we made it! Our Venta Airwasher is ready to be placed in it’s home in the bedroom. 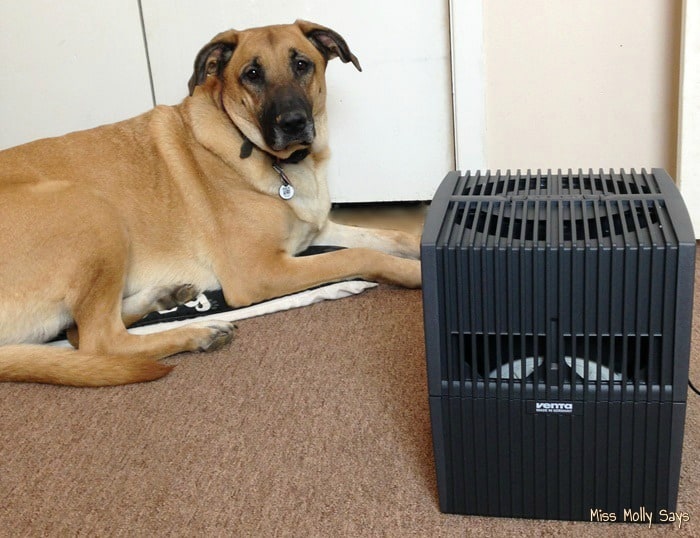 While I was figuring out where in the bedroom I wanted to put the Venta Airwasher, Brandi relaxed and waited. 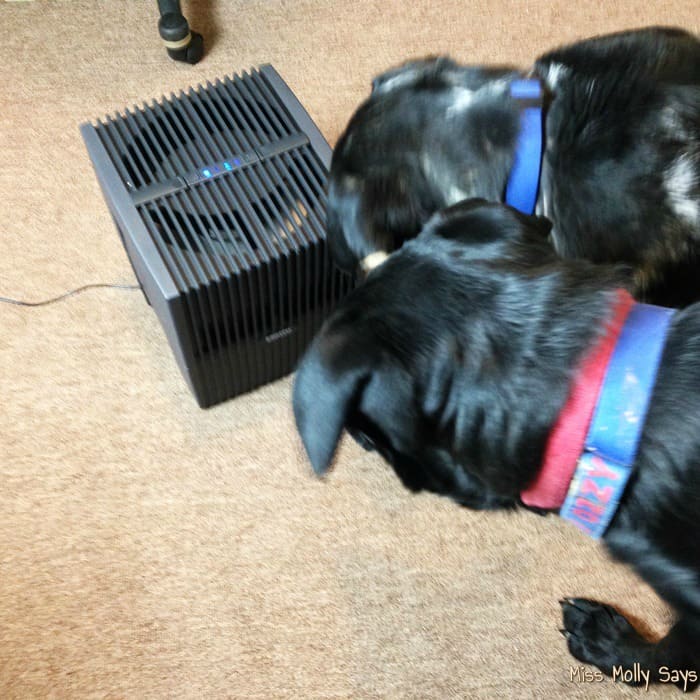 Ozzy went and got Seager to come check it out. 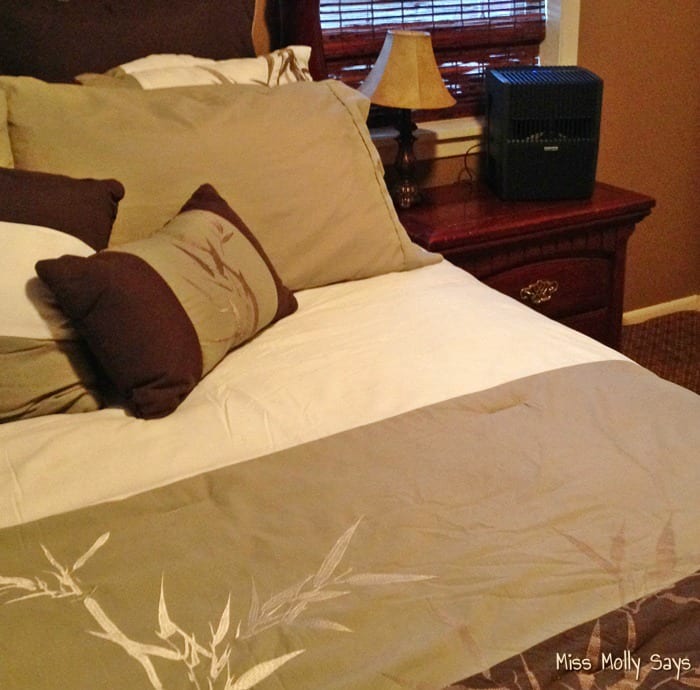 I love the Venta Airwasher so much, it got a home directly on my night stand! I wanted it up front and center! I was also a afraid that the dogs would hit it with their rough housing if it were on the floor. In case you are wondering, the Venta is whisper quite! You can barely tell it is running.

How the Venta Airwasher Works

Purification
The Venta Airwasher works by pulling the dry indoor air into it, where it is literally washed. The dirt, dust, pollen and allergens, old tobacco smoke, and particles stick to the revolving disk stacks and are collected in the water in the lower housing compartment. Clean humidified air evaporates back into the room. Every 10-14 days the yucky particles can be rinsed away!

Humidification
The Venta Airwasher humidifies the air by the process of cold evaporation. Because of the cold evaporation, there is no white residue, vapors or mists. As the disk stack rotates in the water, the dry air meets the surface area of the disk stack, the water evaporates and is sent out into the room. By using the cold evaporation process, any excess humidity can be virtually ruled out. In other words, you don’t have to worry about over-humidifying or lime deposits!

For anyone, including pets, with sinus problems and allergies — air purification and humidification are a blessing! Oh, and the best part is it does this all WITHOUT a filter!! No messy filter changes or extra cost to keep replacing filters that cost as much as the unit!

To clean the unit, just empty out the dirty water and wash the lower housing with warm water. Then, using warm water again, wash the disk stakes. I found it easier to spray the disk stacks with the hose nozzle on my sink. Wipe the fan blade with a soft cloth, refill with Venta Water Treatment Additive, and add water. You are now ready to go again another 10-14 days.

Twice a year, the unit can be broken down, the fan took out, and thoroughly cleaned by using the super easy directions that come with it. 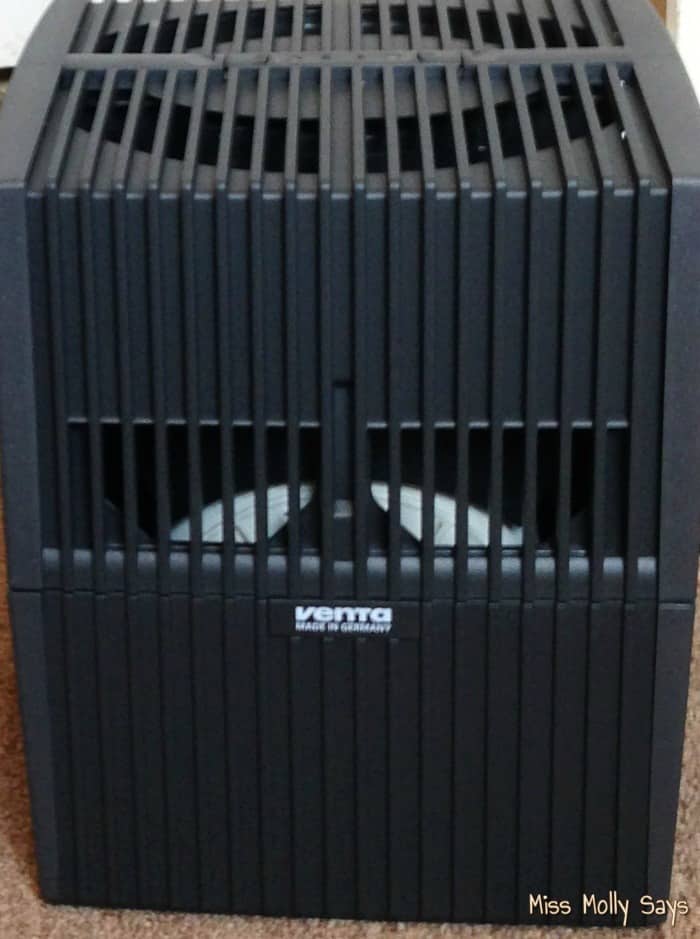 We are totally  in love with our Venta Airwasher! Us, and the dogs, are resting much better! The bedroom DEFINITELY smells and feels so much cleaner! I feel more rested after waking up and am not my usual sneezing, hacking, stopped up self! And, the pups seem to be doing better too! Ozzy’s ears have cleared up and while some itching and scratching is still happening, I think it is much better. I will go so far as to say, we will never be without a Venta Airwasher in our home again! The benefits are truly amazing, both for us and our 4-legged family members!

The LW15 Venta Airwasher covers a 200 sq. ft. area, making it perfect for bedrooms and other small rooms. Venta also has several other models, and sizes, to choose from for your home. There is sure to be one to fit your needs! Join the Venta family and you can start breathing easier today!

Want to learn more about Venta? Connect with them socially

that would be good for my dog.

Hi Laurie! The Airwasher is absolutely perfect for pet parents. Call us toll-free and start your 14-day trial today. 888-333-8218.

Sounds like a great product! So cute that your pups where curious about it! :)

The Venta Airwasher looks GREAT! I'd like to use one in our house, as I personally have allergy problems -- maybe it could help!

Hi Tarissa! Thank you for your kind words about the Airwasher. Team Venta absolutely believes we can help with your allergy issues and would love to start you on your free trial. Call us toll-free at 888-333-8218 today!

(Venta Airwasher & Humidifier is Great for Pet Allergies #VentaFamily #Review #ChristmasMM15) I sure could use one of these in our master bedroom when we sleep at night. Our two cats shed a lot during the winter months.

June, the Airwasher is perfect for keeping on all day in the bedroom for perfect indoor air quality and more restful sleep at night. A few drops of your complimentary Aromatherapy will turn your bedroom into your personal spa. Call us toll-free at 888-333-8218 and order today.

My sister could use this with her cats.

Team Venta couldn't agree with you more, Richard. The Airwasher is the perfect gift for everyone on your list this holiday season. Call us toll-free at 888-333-8218 and make your sister's (and her cats') season bright!