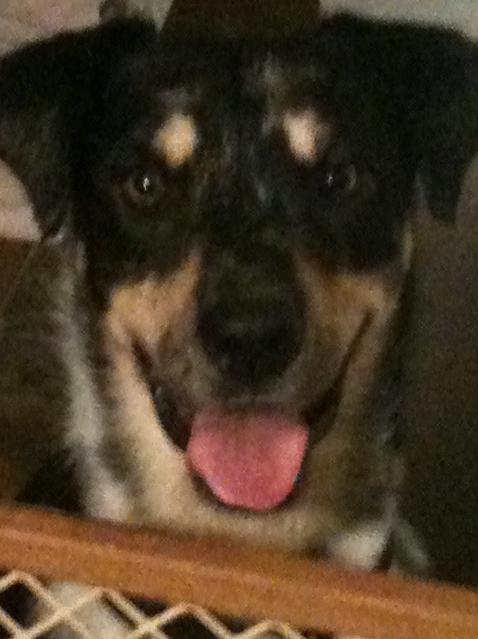 I told y’all we might be gettin’ a brother! Well, we got him! He is half Australian Shepherd and half lab. I got to admit he is kinda cute, for a boy. We are gonna call him Seager (I’ll tell y’all where our names come from later). He sure has a lot to learn though! They brought him home in the middle of a thunderstorm and had to get out there and give him a flea bath before we could even see him. Yep! they were out there in the rain bathin’ him! 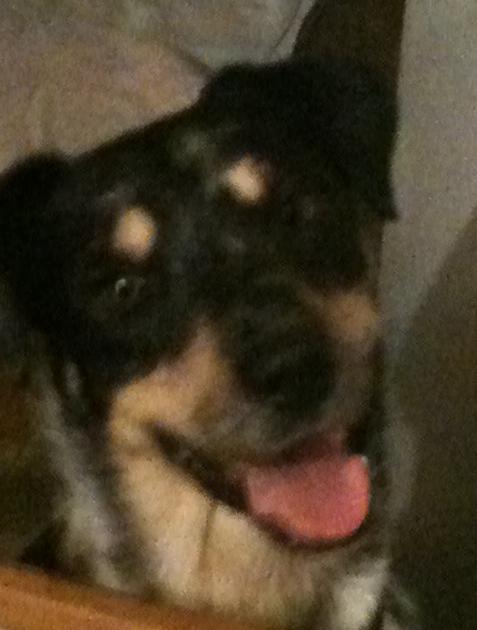 Then, when they finally brought him in, he was wilder than a pinball in a pinball machine! YIKES!!! I ain’t never saw anything move so fast! But, he would run and then scratch, run and scratch. That’s when my lady decided another bath was in order. This one in the bathtub! Holy Moly!!!! They were gonna put that runnin’ jumpin’ thing in the bath tub, he he! Good luck! Well, they scooped him up and off they went. Boy, there sure was a lot of sounds a comin’ out that bath room, but eventually out they all came. He ran, shook, jumped – you name it! My sisters and I got under the table to watch all the goin’ ons. This was gonna be featured entertainment, woo hoo!

My lady and man finally got him captured again and started givin’ him some of that medicine that keeps the fleas off of ya. He was more interested in that food and water bowl in the corner though! Man, that dog was scarfin’ and suckin’ up water!  He was a slingin’ stuff everywhere!!! I ain’t never saw anything like it! Eventually, he finally stopped, but then!!!!

Pretty as ya please, that dog hiked his leg and peed on my ladies wall! Uh oh, this was not gonna be pretty! She went to yellin’ and jerked him up on a leash to go out. But ‘for they could get to the door he did the other unmentionable! Man, what a mess!!! We were all still a hidin’ under the table just a waitin’ to see what was a comin’. My lady took him on out the door all a jerking and bucking on that leash. This was some wild dog!

My lady said we all had to be patient with him. Ya see, he had been in a little bitty pen all his life (2 years)! His dog house took up most of the room. He had enough room to walk around it and that was just about it. She says he just wasn’t use to nothin’ else and never been in a house before and that he would calm down and learn. I had my doubts, but I guess she knows what she’s a talkin’ about.

After two baths, medicine, filling his belly, slurpin’ up all the water and takin’ care of all his business we moved on to the next BIG problem! He is a brother furbaby and we are all girls. We have all been spayed, but this didn’t seem to matter to him none! He saw 3 females and here we go! The chase was on!!!! This was not good, not good at all! All I can say is my lady has her work cut out for her on this one! She did say he needed to go see them vet people for other stuff and to get fixed. All I know is, he better get “fixed” quick cause we ain’t a goin’ there!!!!

By the time I’m a tellin y’all about all this, he has been here about two days and I do have to say today has been a lot better. My lady seems to have him under control. He is a goin’ out for his business and hadn’t done any more sprayin’ her walls for sure! He is still a pesterin’ me some, but not like he was that first night. He is still a eatin’ like a mad dog and slingin’ water everywhere. You would think that dog never had any food or water! But, again, I can vouch for being hungry and thirsty. I told y’all how I got here and it wasn’t no fun out there on my on!

He has definetly calmed down. He is layin’ at my lady’s feet and a listenin’ to her. And, when we go for play time, he actually runs and plays with us. He likes to run as much as I do and that’s a sayin’ somethin’! So, he just might work out to be a good brother after all 🙂

Oh, and sorry them pics are so blurry, but he is hard one to catch being still right now 🙂