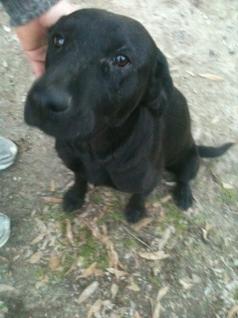 We have had a lot goin’ on with the strays that stay outside. First, we thought they all run off somewhere. Well, as it turns out, the big male German Shepherd and the one female are still gone. But, to everyone around here’s surprise, we found the little pregnant one in one of the sheds out back a couple of days ago. Yep! You guessed it! She was in labor.

That big old German Shepherd done knocked her up and run off with the other female leavin’ her and all the baby puppies! That wasn’t very nice of him at all! Anyway, she had babies all day that day! She was so tired and worn out that night. In the end, she had a total of 10 babies. My Lady said one of ’em died right after it was born, and there were 9 of  ’em lived.

Even though she was in the hay, My Lady and Man tried to help fix her spot up a little better with some blankets cause it was really cold that first night!  They can’t bring em in the house with us four. I heard ’em a talkin’ and they said one of us might would hurt ’em. Surely, they don’t think I would do nothin’ like that! I just wanna see what’s makin’ all that cryin’ noise!

I never saw such goin’ ons ’round here! Last night, they took that big dog house inside the shed. Then, they put hay in the bottom of it. After that, they carried in pillows and blankets to put on top of that. It sure looked mighty comfy! Then they put a blanket on top of the dog house! My Lady kinda went off the deep end cause they lost one of the baby puppies 🙁 It’s really cold here, especially at night. They think the little newborn got to cold so soon after just bein’ born. He wasn’t doin’ good at all yesterday. All I know, is they look like queens up in there now!

They even got the new momma some special food to eat. It was tasty! Don’t tell, but I stole a bite of it. Supposedly, it has more calories than what we normally eat around here. My Lady says the new little momma needs extra calories to help with milk for the babes. 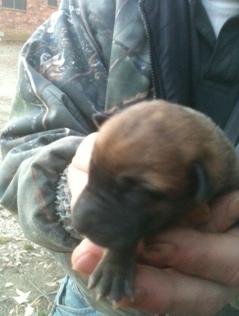 We are calling the momma “Little Mary” cause she came and had her babes on the hay in the out builiding 🙂 We didn’t know what to call her, until a friend said that. That name fits just dandy! Now, we still gotta come up with 8 more names!!! Not sure how many are girls or how many are boys right now. My Lady said they were to worn out to try and see after all the cold and switching beds. But, we will find out and I will let ya know. We got this one pic for ya. But, it is to cold to pull all of ’em outta there just for a pic!! I’m waitin’ to see all of ’em too! We aren’t allowed to go in the shed, so none of us furbabies have got to see em yet either!

All this commotion, and it’s for one of the “stray” dogs?! My Lady just can’t seem to help herself! But y’all be ready! She is gonna have to find homes for all them babes in a few weeks – Woof! Woof! 🙂