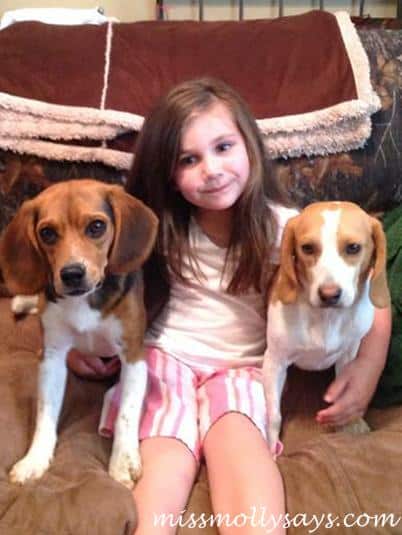 With all the fuss goin’ on round here lately, I been forgettin’ to tell ya bout my cuzins! As ya all know my big lovable ole Beagle cuzin Chop went to the Rainbow Bridge. He has sure been missed round here. Not to worry though, Harley has kept them human folk on their toes. She is one of them Beagle pups that like to stay into trouble. She loves to play outside and bark at all them other pups in her neighborhood. She loves chasin things too. Rabbits, squirrels, birds, cars, you name it, she will chase it!

Poor thing learned real quick, everything don’t like to be chased. She finally met her match with a car comin’ down the street. It caught her leg and messed it up real good. Her lady took her to the vet for an x-ray, one of them things that can see right through ya. Found out that her leg had broke in two and her hip was in bad shape too. She had to have surgery and a pin put in to hold her bones where they ought to be. I tell ya what, her lady took real good care for her. Got her all fixed up. Even though her leg is worrisome at times, Harley can still out run any critter out there.

Harley seemed to be gettin’ in quite a bit of trouble, so her lady decided it was time for a new Beagle pup sister. After doin’ quite a bit of huntin’ and diggin’ they found Sunny!! Sunny is a timid yet fun lovin’ Beagle pup! She is not just an ordinary ole Beagle though. She is purty as the sun. She has yeller fur. Not many Beagles pups are yeller, so she sure is special. Sunny is the same age as Harley and they love playin’ together. They love to fight too! Sunny is sure shy when it comes to new people, but Harley never meets her a stranger. To be so different they sure to make quite a pair!

Now that all the fussin’ is settlin’ down round her maybe I will have more time to visit them cuzins of mine. Im sure I’ll have plenty more stories to tell about those two crazy Beagle pups in the future!