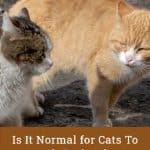 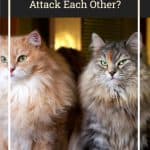 If you plan on getting another cat, you’re probably wondering if your current one will take the addition well. Or, it could be the new one who won’t be too happy sharing space. You may be asking if they will get along or is it normal for cats to attack each other, right?

Either way, you don’t want feline battles to be a regular occurrence in your home, especially if you have kids around.

Plus, dealing with the mess that comes with these fights—fur flying everywhere and stuff getting knocked over—could be more than you bargained for.

While some cats get along fine, others just won’t bother to give peace a chance.

There are quite a number of reasons behind this, one being under-socialization. It’s when a cat simply can’t associate the presence of another with a pleasant experience.

Today, we’ll explore the reasons some cats just can’t help but wage war with one another and offer solutions to bring peace to your home.

The Smartly Pet will also provide some tips on how to get your feline friend to stop being a bully.

Why Cats Fight and How to Get Them to Stop

Some catfights aren’t actually fights. Sometimes, what appears as fighting could actually be playing.

While this is a more common occurrence among kittens, adult cats also aren’t immune to it.

Cats will pounce at each other, chase each other around the yard, and slug it out like wrestlers on the floor.

Play fights might look like they are escalating into real fights, but as long as there’s no bloodshed, there’s no need to break the fight off.

Then again, there are also situations when fights can be real, such as in the following:

We all have that friend who we are still getting to know and not sure what to think about. A cat can have that, too.

In the first few months of assessing each other, cats are likely to play-fight a lot.

While some of the fights can be real, most of them are harmless.

For the most part, your cats are just trying to assert dominance over the other and seeing who gives.

In situations like these, it is better to let your feline warriors get it on and out of their system.

Eventually, they will be over it and maybe even become good friends.

2. Unease at a New Addition

Your little feline friend may not take too well to the household’s new addition.

If you have a cat who’s used to having all the attention or a group that’s already established a hierarchy, the introduction of a new kitten can mess things up.

While pets shouldn’t dictate your decisions, you want to ease your cats into the new situation.

This way, some of the furballs won’t get too upset and the new furball can fit right in with little trouble.

Cats love having a routine. They feel most comfortable and at ease when things are predictable.

When something messes that up, a cat can get stressed and pick fights with his or her fellow felines.

Some situations that can give rise to stress in cats are:

Sometimes, these things are out of your control. However, as much as possible, you want to keep your cat’s routine normal to prevent stress.

Cats are great at putting up a front.

They can be ill and in pain, and you won’t even know any better.

When they do begin to show symptoms, that’s when their illness has become serious.

Cats that are ill tend to pick fights a lot, even with those they used to get along with.

If an alpha is sick, the cat who’s next in line will try to fight and overthrow him.

What you can do to manage these situations is to educate yourself on your cat’s daily habits and energy levels.

If unexplained changes occur in their behavior or personality, that may be a cause for concern.

You should then consult a veterinarian to be sure illness isn’t the reason for your cat’s unusual aggression.

Some have personalities that jive, while others have characteristics that blend like oil and water.

When cats that are polar opposites in personality come together under one roof, things are bound to get dicey.

While personality conflicts usually don’t last, they can be scary when they do happen.

Depending on your cats’ personalities, you can either put them in separate rooms, give them more individual attention, or buy them a variety of cat toys to diffuse the situation.

Let’s be honest. One of the reasons we love cats is because, unlike dogs, they aren’t overly friendly.

They are divas who want things to be all about them.

While their personalities vary in some ways, they are almost always uptight and dominating.

That means they are bound to get into fights.

However, as mentioned, most of these fights are play-fighting and usually don’t require any intervention.

And, sometimes, even when they are real, it’s just best to let them happen so that they can get it out of their systems.

I have seen plenty of cats fight. Always thought that was their nature. Thanks for the post.

Our cats get aggressive if they are hungry. We have to be organized with their feeding schedule to keep the peace in our home. We've also experienced each of the reasons that you've mentioned in your post. We have several group play sessions throughout the day and also individual time with each of our cats. This usually helps minimize fights.

This was an nteresting and informative article. Thanks.

This was a great read! My cat had a litter of kittens a few months ago and as soon as she stopped feeding them she wanted absolutely nothing to do with them and will go out of her way to avoid them now, is this normal? The three kittens get along just fine with each other and are huge cuddle bugs but momma cat has always been a bit of a lurker ever since we first got her as a kitten several years ago.

When I had 2 cats they were mother and daughter so they got along very well.