Most high school and college history classes won’t go into detail about the importance of cats in World War I. These feline friends helped Allied soldiers cope with the hardships of war and were assigned specific duties to keep the troops better protected from enemy forces. Here are four important roles that cats played during World War I. 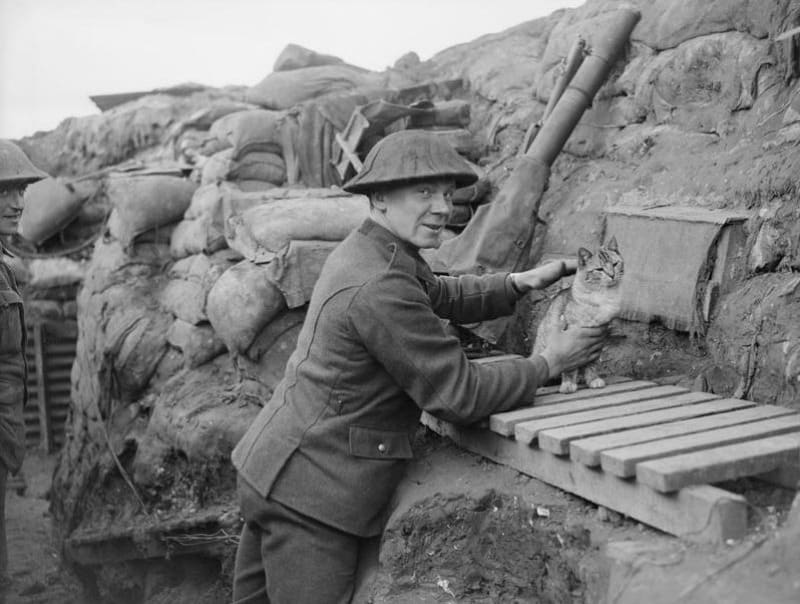 Cats and War: The Little-Known Military Use of Felines in WWI

Mice and rats were often found in trenches and ships during the war. To protect the troops from contracting rat-bite fever, the plague and other illnesses, cats were used to hunt rodents. Rodents were also known to chew through ropes and leave droppings that caused further health concerns. Using cats to eliminate rodent problems also helped keep food supplies from diminishing.

Cats even played an important role in detecting gas that could have potentially sparked fires and explosions and caused other problems for soldiers. Felines are known for their keen senses of smell, and this was useful in detecting gas that was not always easily noticeable by humans. In fact, cats have millions more smell receptors in their noses than humans, which allows felines to distinguish harmful smells more easily and alert their human companions.

Cats also helped keep some soldiers hidden from enemy troops by causing distractions. Anyone who’s studying to earn a master of history degree online may have come across the story of Lieutenant Lekeux. While serving in the Belgian army, the lieutenant had a cat named Pitouchi living in the trenches with him. When German enemy soldiers approached a hole that Lieutenant Lekeux was hiding in one day to investigate noises that they were hearing, Pitouchi jumped out and surprised them. The Germans then believed that the noises were just coming from the cat and left the area without noticing the lieutenant in the hole.

Many troops turned to cats for companionship, and this helped boost morale among the soldiers. Some cats were even used as mascots for ships and airplanes. A feline named Ching became a mascot for the HMAS Swan battleship. Other notable cat mascots were named Martinpuich, Tabby and Pincher. There were also soldiers who believed that cats were good luck charms.

It wouldn’t be a stretch of the imagination to believe that cats helped lead Allied forces to victory at the end of World War I. These feline companions performed many essential duties that saved soldiers’ lives and gave them an advantage over enemy forces.

This is an interesting article. I know that cats have a keen sense of smell but never considered that they would be able to detect gas.

I didn't know this part of history of cats.. very interesting..

That's neat, I've heard about dog's during wars but not cats.

This is the first I've learned about this. Incredible!

Awesome article, Thanks for sharing.