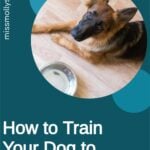 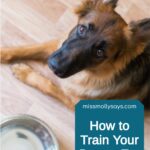 Do you fear your dog’s health because overeating can look bad on its pedigree? Is the possibility of a breed like a deep-chested German shepherd becoming exposed to unhealthy eating habits putting you off? Bloating can result from eating too quickly and not having intermittent breaks during feeding time. Here we will discuss how you can train your dog to eat slower.

Some dog owners complain that the eating routine of their dogs looks nothing short of a frenzy, with their pets almost ‘inhaling’ the food before them.

The truth is that conventional ways of asking a dog to slow down eating fail because the dog would never listen.

The simplest way could be hand-feeding the dog, but perhaps one can only go a limit to committing to such a chore.

Hand feeding is effective and gets classified as one of the most time-consuming ways, especially for those with a strict office routine.

The science behind the problem is that it goes beyond just the dog’s mannerisms since it comes with a magnitude of health risks.

When you see your dog almost inhaling food, it takes in a lot of air down his throat.

The air entering into their intestines causes increased chances of bloat and can lead to a health condition commonly known as GDV, which consists of gastric dilation and volvulus, GDV.

After all, getting a good dental checkup can go a long way to understanding and improving feeding time.

Commercial slow or puzzle feeders can help secure the job.

However, objects around the house, such as the ones mentioned, can also come to your aid.

When you place a bowl on the floor, does your dog almost snatch it out of your hands?

When meal times look like a race against time, you might want to slow down the process.

Self-restraint and control go hand in hand for dogs, as well as humans.

Such behaviors do not just lead to better eating habits but also get considered good manners overall.

One of the many ways to do this is to train the dog to wait for a signal to start eating.

The process might not prove effective in controlling eating speeds from the bowl, but it sets up the concept of a slow feeder.

You can begin by assigning a spot for your pet to sit and have its dinner on the regular.

When the dog follows you and your progress towards the feeding spot with the bowl, make sure to make it clear that no food gets served till it sits.

The no food equals no sit policy is easy to understand for the animal and is an overall tried and tested method.

During the initial stages of training, he might fool around for a bit, but more often than not, he will plant himself at the expected dinner spot.

As soon as he touches the floor, words of affirmation like a simple ‘good’ even promote the desired behavior.

In some cases, impatience might cause the dog to get up while you are still placing the bowl on the floor.

At such an instance, you can proceed with comments of dissatisfaction such as “Uh-oh” and take the bowl back up again.

You can then repeat the process while it waits for you to put the bowl down again for eating time.

Have the Dog ‘Wait’

Another gesture that could help you while the bowl is on the floor still is holding up a finger and signaling the dog to wait.

The dog should acknowledge the gesture and step back away from the bowl.

Keep the bowl at a reachable distance from the dog and if it goes for the food before you allow it to, say “Uh-oh” and pick the bowl back up again.

Now you can continue with the sitting command as an effective training strategy.

The term wolfing down food seen in most breeds is just a part of their lives and everyday eating habits.

In the wild, where survival of the fittest becomes the ruling factor, dogs often gorge on food to stop their competitors from feeding on it instead.

Therefore, one way to get started is to analyze any underlying psychological issues that could cause such behaviors.