We are programmed from childhood to believe that dogs should eat bones. Cartoons portray dogs eating bones and burying bones. Even a famous kiddy song says, “With a knick knack paddy whack, give a dog a bone.” Many of the treats we give dogs are in the shape of a bone. And there are those who believe that bones are healthy for dogs.

Those who feed their dogs bones reason that canines in the wild eat bones all the time and that it’s natural for them. They say that only cooked bones pose a risk of splintering and many of them claim they have fed their dogs raw bones for years with no problem. Yet an Internet search yields discussion forums where former bone-feeders have repented after their dog developed life-threatening problems. 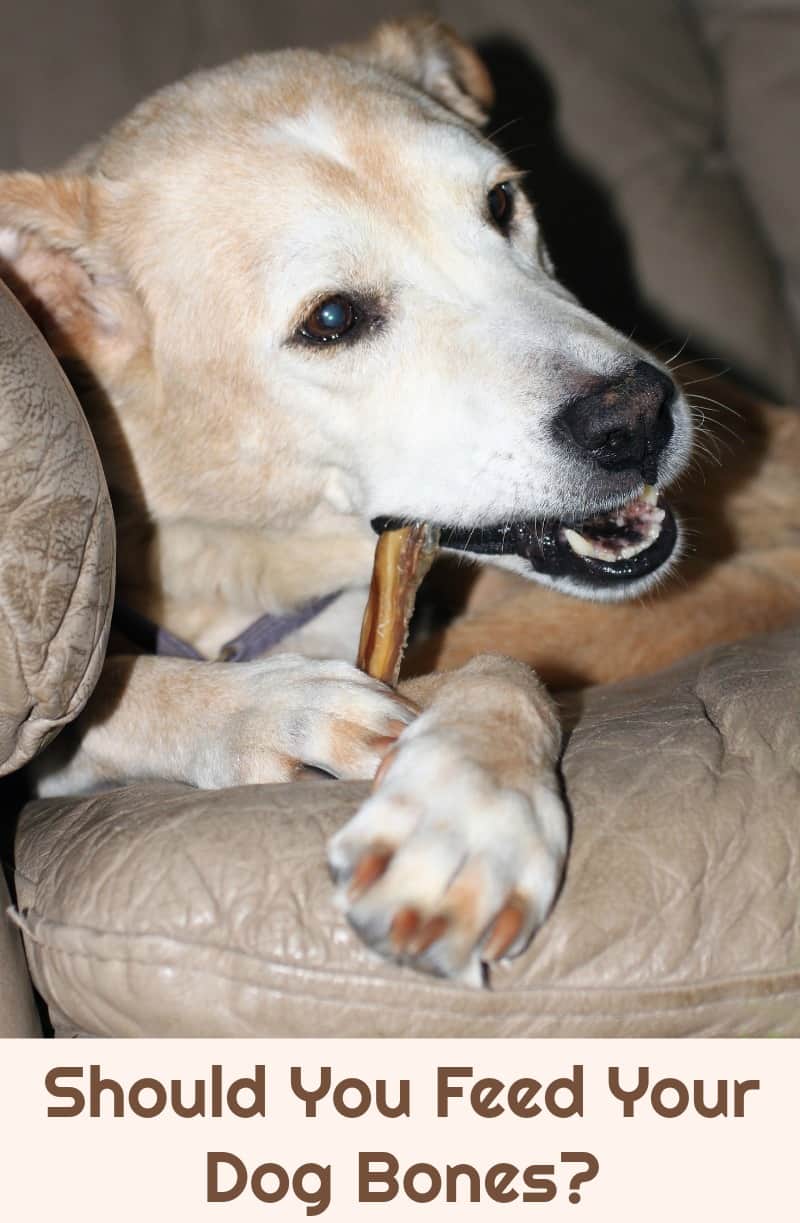 What Can Happen from Eating Bones

Their stories tell of drastic and difficult surgeries. One such story was to remove a bone stuck in the esophagus, leaving the possibility of scar tissue preventing swallowing. Another story is a difficult surgery to remove a bone from the colon and bone fragments from the large intestine. Still, others tell of chipped teeth or teeth pulled out of alignment, some resulting in abscesses.

Natural is not always better. It’s ‘natural’ for wolves to die of rabies once in a while. That’s why we vaccinate our pets.

What About Wild Canines?

Other experts said that they knew of no documented cases of wild canines having digestive problems from bones. The general consensus was that wild canines feed on the whole carcass, swallowing hide and hair with bones which provides some protection, but gastrointestinal problems probably do occur occasionally. One claimed there is documentation of wolves choking on bones or starving to death after bones became lodged in the throat. There was general agreement that bones have little nutritional value but wolf-keepers fed their charges bones mostly for strengthening the jaw in preparation for release to the wild.

In summary, documented cases demonstrate that dogs fed bones can suffer horrendous gastrointestinal problems. If a definite risk is there, why take a chance with your dog?

I would be very nervous if I gave my dogs any bones, so to me this is a no no, but I do buy bones that are made for chewing for them. @tisonlyme143

Also same thing with cats too, definitely a nightmare, don't leave bones around.

I have always heard you shouldn't. Especially chicken bones!

I absolutely agree with not giving bones to dogs. Why take that chance?