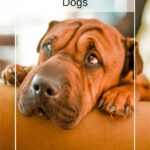 The discs in your dog’s back serve as shock absorbers for his spine. So when one is injured such as happens with a herniated disc in dogs, he’ll be in pain.

A herniated disc can occur when the discs in your dog’s neck calcify or compress and burst or become displaced.

His back legs may appear weak or he may move gingerly on them.

In addition, you may see muscle spasms in his back, or he might hunch over when he moves.

These are symptoms that your dog may have a herniated disc.

See your vet to help diagnose and treat the problem.

The spinal column, or backbone, is constructed of bone segments, called vertebrae which are stacked on top of one another.

The vertebrae support and protect the spinal cord, which consists of all the nerves that operate body functions.

In between each vertebra is a disc that pads and cushions the bone.

The discs are made of a gelatinous substance that absorbs shock and eases motion.

A herniated disc is simply a disc that has been moved out of place by any of a number of causes.

A herniated disc is in an incorrect position and no longer supports the spinal column correctly.

It can place excessive pressure on the bones and nerves along the spine.

Movement will often make this condition more painful as it can push the disc further out of place or cause the disc to collapse completely.

What Causes Herniated Disc in Dogs

Trauma is the most common cause of a herniated disc.

A blow to the spinal column may not hurt bones themselves but will often dislodge a disc.

Herniated discs in dogs can also be caused by overuse or a pre-existing structural issue.

In cases of overuse, an active dog may experience constant wear and tear on a disc which eventually leads the disc to herniate.

In structural issues, the bones themselves are malformed, causing weakness and a greater potential to herniate.

Symptoms of a Herniated Disc

A herniated disc in dogs will cause them to be reluctant to move and in considerable pain.

Symptoms to look for include crying out in pain, weakness in hind limbs, inability to walk, unwillingness to climb stairs or jump onto a bed or other surface, an unstable gait, and loss of bowel or bladder control.

Treatment depends on the cause.

When the herniated disc is caused by trauma, such as in the case of overly intense play, a course of anti-inflammatory medication and rest can be all that’s needed to treat the problem.

In older animals with recurring problems, the ongoing use of anti-inflammatories or even steroid medication may be used to treat the chronic condition.

Surgery is often the only option in animals with structural defects or massive trauma.

Surgery is typically accompanied by drug therapy and activity restriction.

Some breeds are more prone to this problem.

Dachshunds are one example of a breed prone to herniated discs.

They have a disproportionately long back to their body size.

The long back offers the spinal column less support from the other body parts.

Therefore, it will cause the back to absorb more stress when the dog is in motion and can cause a herniated disc.

This is good information to know