There’s a lot of folks out there that say cats are strictly independent animals. These same folks say cats have chosen to associate with humans just for survival. Although there are a lotta other folks that will argue with this, there are still lots of folks that agree with em. Me, I say cats just wanna act a bit uppity! So, do cats bond with their owners? 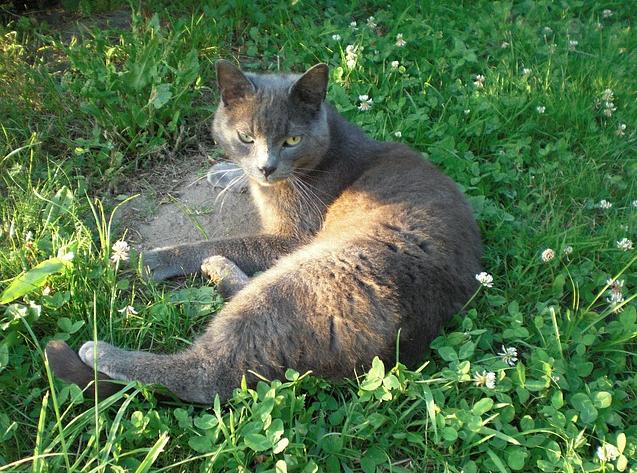 My Lady use to have a Russian Blue like the one above that she called Pookie! What a name WOOF! Anyways, she got him when he was just a wee babe needin’ a bottle. She wasn’t sure what happened to his moma, but the whole litter was left with little chance at survival at that age. She found homes for his litter mates but, kept him. She said he followed her everywhere! Sounds like bondin’ to me!

Anyone who has owned a cat will tell you that cats are great at bonding with people, although they are very particular. Normally, a cat will choose someone in the home that he bonds with. You’ll know when a cat wants to bond with you, as he will hop on your lap seekin’ attention or snuggle up to you at night when you are sleepin’. Purrin’ is a strong sign of affections, especially with cats that are looking to bond.

Although many experts have tried to figure it out, no one really knows why cats choose a particular person whom they will bond with. It could be that person’s manners, voice, or simply how that person treats the cat. Maybe, it’s that the person is really gentle, or a little more forceful bringing the best out in the cat.

There are a lot of ways that researchers have tried to tackle this subject, one of which is bein’ psychic. Some say that cats bond with someone due to a psychic aura that is compatible with both the person and the cat. If a cat feels that someone is giving them a bad vibe, they will simply ignore that person. Although, this can be true to a sense for some, a majority of those who own cats will tell you that this couldn’t be any further from the truth.

Even though there are a lot of theories and speculation out there, no one really knows why cats bond with humans. There’s little to no proof available as well, other than cats and their natural instinct for physical survival. Those who own cats know that cats crave attention and love! They love to be pampered by their owners, and will shower you with attention and affection if you just give them the chance.

Those who are new to owning cats may find bondin’ with a cat hard to do. Cats are on the different side from other animals, includin’ dogs, in the sense that they bond different. Different breeds of cats will bond different with their owners, although most prefer affection and attention. The more time you spend around your cat, the more he will bond with you. Over the years, you’ll find that the bond you create with your pet has grown very strong and simply cannot be broken.

What do you think? Do cats bond with their owners or not?

Mine sure has.. definitely has a nice personality

My Romeo has had contact with me since he was born in very late 2001.His "daddy" wanted him to go to me and my daughters.We have had him ever since.He talks,purrs real loud,acts like a baby,dog,and is very smart.In a way too smart for his own good?!He is small for his breed and age but healthy.Never take him to the vet.Past things with the treatments that almost killed my other cats,have made me stay away .

Cats do bond with their owners, my cat Oskar can't stand it whenever I leave the house.

I've had several cats and I truly believe they bond with their owners. Some may be slow to warm-up or just overall standoffish but they always want attention and to cuddle at least some of the time. Others may be quite affectionate and want to lay with you all of the time. They all have their own personalities. :)