I know you humans use lotions and balms to keep your skin smooth and moisturized but have you ever noticed the condition of the paws on us pups? Our paws take a beating every day seein’ as to how we don’t wear shoes WOOF! And, while I envy those pups gettin’ to run and romp in all that fluffy white snow, I know their paws take a beating! But, that doesn’t mean us pups livin’ in the hot humid South don’t need paw protection too. We walk on hot sand, rocks, pavement and all kinds of ground that roughs up our paw pads. In our pack, some of us have even had them get so dry they crack. Talk about hurtin’ WOOF! But, my Lady finally found some pawsome conditioner and protectant wax call Musher’s Secret that has worked wonders to soften up our dry cracked paw pads and even our calloused elbows! 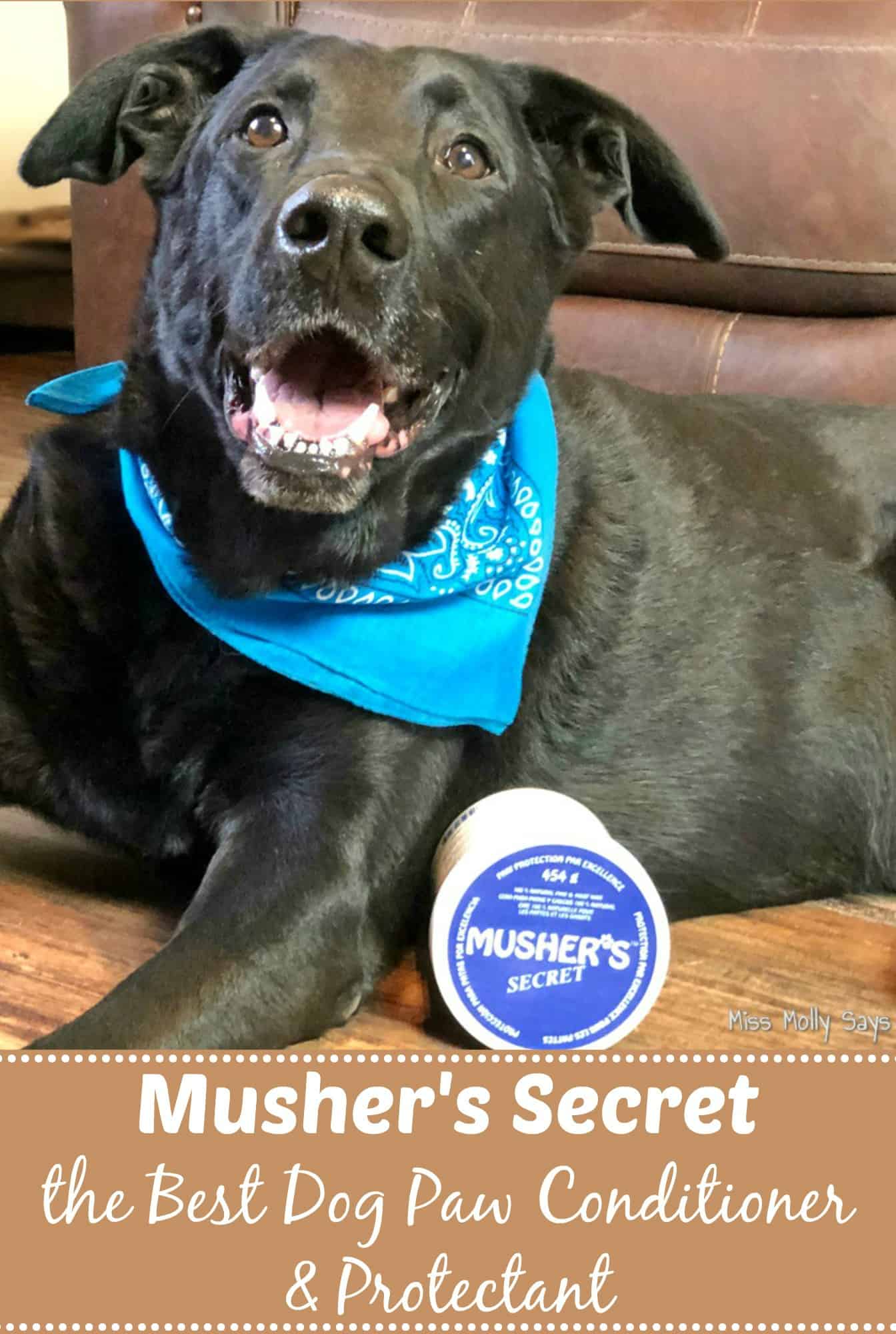 Musher’s Secret all-natural paw wax is what those fun snow dogs use to help keep their paws in tip-top condition while running through all that snow and ice. But, you know what? It also works for us southern pups too. It works to moisturize our paw pads and can we talk unsightly and calloused elbows? Yep! My elbows are somethin’ no girl in her right mind would be proud of but our Musher’s Secret is smoothin’ them out right nice too! Lemme fetch my Lady to tell ya more about Musher’s Secret and how it can help you! 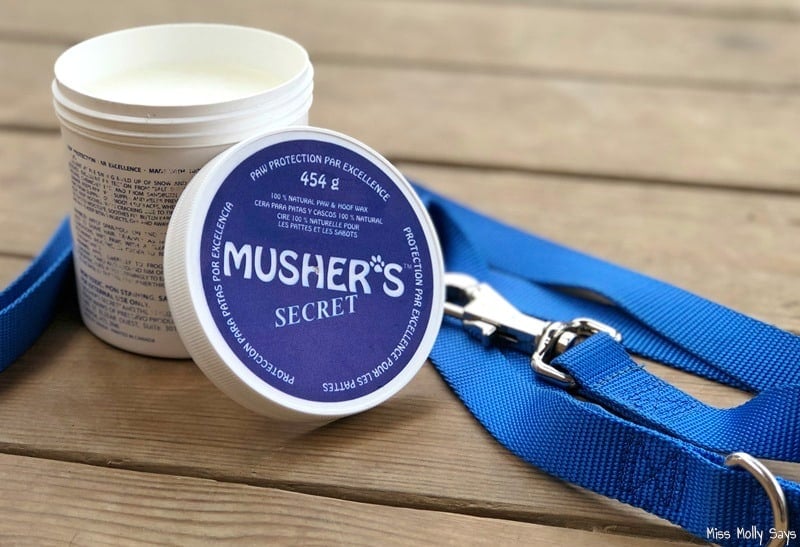 Here’s what my Lady says about Musher’s Secret

Miss Molly is telling the truth on their paws and elbows. Their little (or should I say, big) paws get rough as sandpaper. If they happen to run their feet down your bare leg it can make you holler in pain! And, for some reason, all the big dogs have horribly calloused elbows. While they have plenty of comfy dog beds and other comfy places to lay, they seem to prefer the bare floor most of the time. This, in turn, causes their elbows to get dry and calloused.

I have tried all the thinkable solutions such as lotions, balms, even Vaseline to try and soften their paw pads and helps with their elbows. It was either a gloopy mess or they would lick it off before it could even begin to work. But then, I happened upon Musher’s Secret. It piqued my interest but at the same time, I thought it was just for dogs that lived in a lot of snow and ice. However, after further reading, I found it is a solution for any type of dry, cracked paws, elbows, snouts, ears, and even can be used on hotspots. Read on to learn the “secret” of Musher’s Secret! 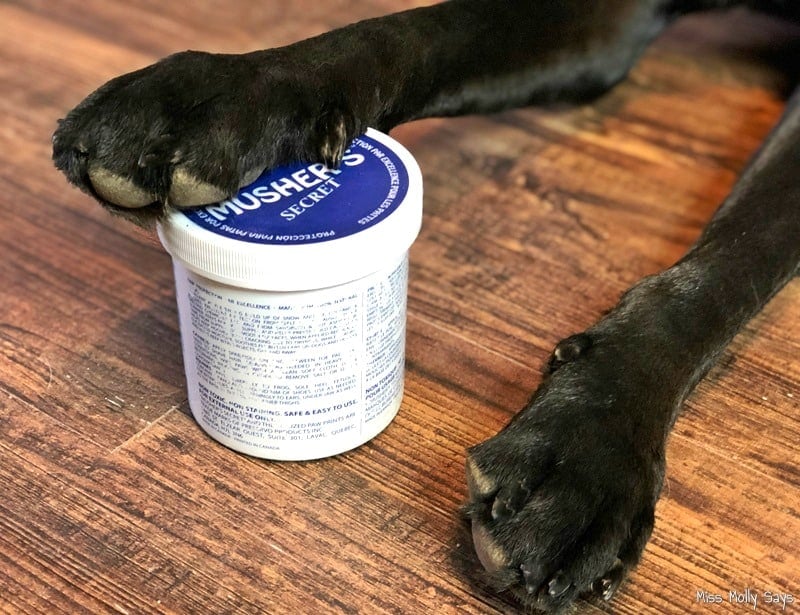 Come on Mom! Can you put Musher’s Secret on my dry paws now? They are super thirsty for relief! WOOF!

What is Musher’s Secret?

Musher’s Secret is a conditioner and protectant and you will love that it is made of 100% natural, food-grade wax. If your dog does lick it, it won’t harm them in the least! After the wax is applied, it forms a breathable barrier that works to condition and protect your dog’s paws. 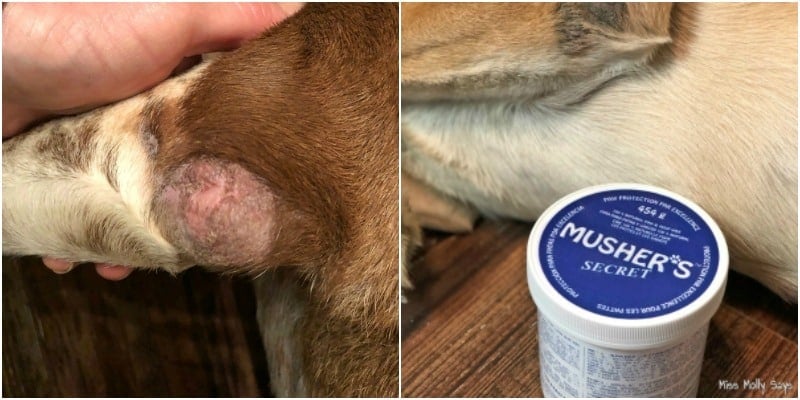 Get soothing relief for dry, calloused elbows from Musher’s Secret!

While it was originally formulated for dog’s paws, it can also be used for those rough and calloused elbows. But, that’s not all it is used for! It is also used to soothe and condition dry snouts and ears and can even be used on hot spots.

Musher’s Secret was originally made in Canada to protect sled dogs’ paws in the ice and cold. However, since that time it has gone on to become a popular year-round solution for various issues and in many different environments.

Musher’s Secret Protects Your Dog From: 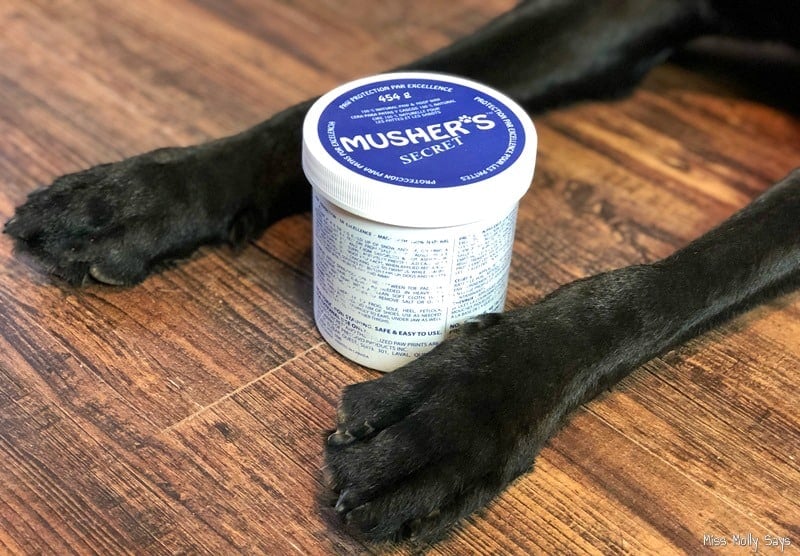 How Do You Use Musher’s Secret?

Musher’s Secret is easy to use and you can use it year round to protect and condition. Simply apply a thin layer 2-3 times a week and rub in. It absorbs in minutes. Once it has absorbed, Musher’s Secret will not come off on floors, carpeting or clothing. If you are having an issue with it getting on your floors or other things, it is because you are using too much. When using in snowy and icy conditions you may need additional applications. To prevent snowballing rub up in between and around the pads.

Another thing to note is that Musher’s Secret is a stable wax, meaning that the shelf life is indefinite. In other words, it won’t go bad.

Musher’s Secret is also great for other animals besides dogs. You can use it on cats, horses, chickens, and exotic animals. 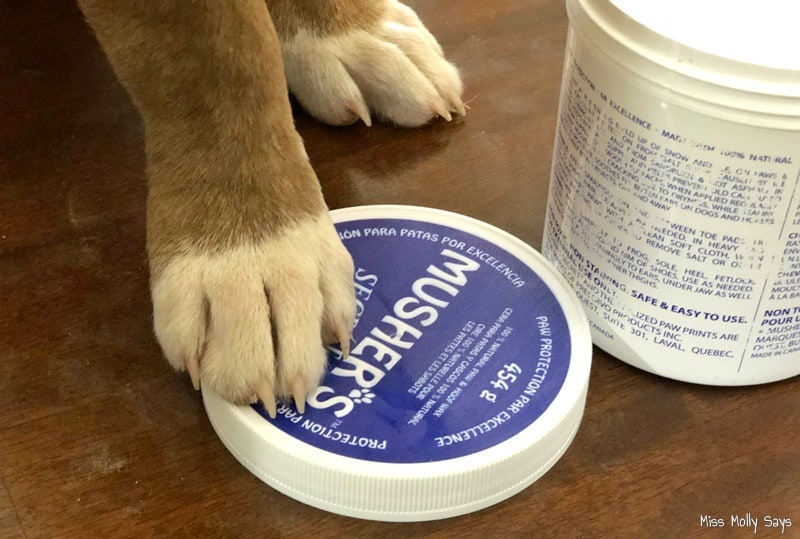 Musher’s Secret is perfect for new puppy paws to PREVENT them from becoming dry, cracked, and rough!

Our Final Thoughts on Musher’s Secret

Both the pups and I are loving Musher’s Secret! For starters, it isn’t a big greasy mess like other solutions I have tried. It only takes a little massaged into their paw pads or elbows to do the trick. As long as you don’t use more than needed, there is no mess. And, it absorbs quickly which helps them not lick it off before it absorbs. I also like the idea that it is made of food grade wax. If they do lick it there is no worry of them getting harmful chemicals in their mouth.

We are still in the process of getting the big dog’s feet back into shape. However, they are feeling softer and smoother each time we use it. And, as we have two new puppies in the pack, I have started using it on their paws to keep them soft. I believe by starting a treatment regimen before the problem arises, there is no reason they should ever get rough sandpaper paws.

My pack of pups love for me to put it on their paws and elbows. At night when they are getting snuggles and belly rubs, it is easy to add a little to my fingers and massage their paws and/or elbows. They just think it is part of their nightly petting and loving 🙂 As an added bonus, the pups tolerate Musher’s Secret so much better than the greasy solutions I have tried in the past! 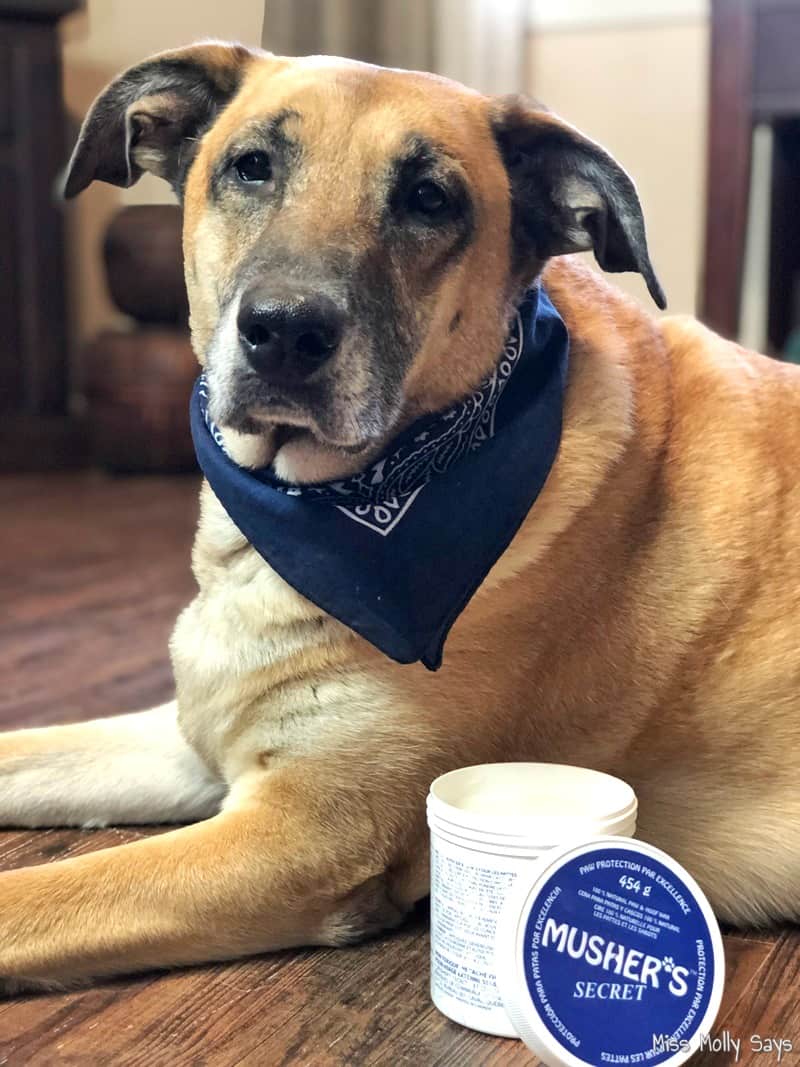 Musher’s Secret Benefits in a Nutshell:

If you are looking for a solution to your dog’s dry, cracked, sandpaper paws or rough calloused elbows, Miss Molly and the pack recommends you give Musher’s Secret a try! Out of all 10 dogs in the pack, there have been no complaints AND things are getting a lot softer and smoother these days!

Neat.. first time I've ever heard of a product like this.

This sounds like a fantastic product and I really need to get some!

This is the first time I have heard of this product. My baby girl could use it!

Never heard of this stuff before. It sounds effective

What a great idea! Thanks for sharing!