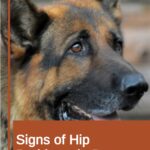 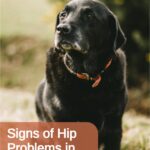 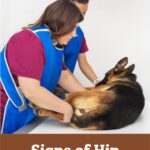 Many dogs, in particular large and giant breed dogs, have the tendency to develop hip problems.

These problems are often recognized during the critical stages of a puppy’s growth.

However, hip problems may technically develop during any life stage, demonstrating a preference for obese dogs and senior dogs.

It is generally easy to recognize hip problems in dogs because the symptoms are usually obvious.

However, some dogs may be stoic and hide their discomfort.

The function of a Dog’s Hips

A dog’s hips are responsible for sustaining weight and creating motion.

Under normal conditions, the ball and socket structure of the hip bones fit snugly together, matching quite perfectly.

In dogs with hip problems such as hip dysplasia, the ball and socket joint is loose or worse, makes no contact.

There are various causes of hip problems in dogs.

The dog may have sustained an injury such as a sprain, a dislocation, or a fracture.

Among inherited hip problems, hip dysplasia and osteochondrosis are common in large dogs, while small dogs may suffer from Legg-Perthes disease.

Another possibility, especially in obese and senior dogs, is arthritis.

Typical Signs of the Condition

If a dog has hip dysplasia, you might pick up on symptoms such as unstable walking, wobbling, and waddling.

If your dog seems to have a tough time getting up or acts hesitant to jump, hip dysplasia could be the problem.

They sometimes are sore after engaging in this kind of exercise.

Their bodies are frequently stiff, particularly right after getting up in the morning.

Not all affected dogs necessarily exhibit signs of hip dysplasia.

If a dog has a particularly mild form of hip dysplasia, his owner might not realize that a problem even exists.

When the hip area is affected, dogs develop symptoms such as: limping, swelling, difficulty climbing stairs, a typical ”bunny hop” gait, pain upon getting up, pain upon flexing and extending the joint, and muscle atrophy in the rump area.

Hip dysplasia typically begins in dogs when they aren’t yet physically mature and tends to intensify with age.

If a dog has a serious case of a genetic condition, there’s a strong chance his owner will start noticing symptoms prior to the dog’s first birthday.

All situations are different, though.

Some canines exhibit their first indications of hip dysplasia when they’re early adults, middle-aged or elderly.

Diagnosis of Hip Problems in Dogs

Suspected cases of hip problems should be evaluated by a veterinarian, who may provide a diagnosis.

Diagnosis is generally confirmed by extending and flexing the joint, assessing the range of motion, and by taking x-rays.

Veterinarians typically diagnose dogs with this condition by conducting X-rays.

If a canine displays symptoms of hip dysplasia, he can receive an X-ray regardless of his age.

Young puppies of just four months old can get radiographs for the condition.

Although it’s uncommon, some canines that have radiographic indications of the condition don’t have symptoms of it in their day-to-day lives.

Treatment is based on the diagnosis.

Obese dogs are put on dietary programs, hereditary conditions are often corrected surgically, and injured dogs are given pain relievers and rest.

Dogs with arthritis may be prescribed NSAIDs or supplements such as Glucosamine.

Any canine can potentially have hip dysplasia.

The condition is particularly prevalent in dogs of bigger breeds.

Gender does not appear to matter.

When dogs of small breeds have hip dysplasia, the odds are higher that they won’t display symptoms.

I always worry about the potential for hip issues with my German Shepherds. I'll keep these signs and symptoms in mind!

Thanks for this important post and info. I you are having hip pain just imagine how your furry family member feels.