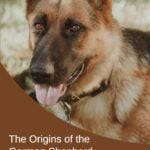 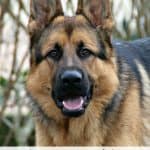 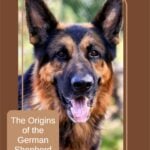 The German Shepherd Dog, sometimes known as the Alsatian, has become one of the most popular dog breeds in the world.

Today, the German Shepherd is an incredibly popular family pet in both the UK and USA.

However, it is also known the world over as a police dog.

Bred with very specific notions of what a working dog should be, the German Shepherd is highly intelligent, obedient, and loyal.

History of the German Shepherd Dog

Perhaps unsurprisingly, the German Shepherd Dog has its origins in Germany, where it was bred as a herding animal.

It is a comparatively modern breed, as it was not registered until 1899.

Until the latter part of the 19th century, farming communities in Germany would have individual breeding programs, which meant that the herding dogs differed in appearance, character, and ability from one community to the next.

In 1891, an organization called the Phylax Society was created.

The aim of the society was to establish standardization for the dog breeds of Germany.

However, the members of Phylax fought over which traits each breed should consist of and so the society was disbanded in 1894.

Although not successful in its goal, the Phylax Society paved the way for advocates of standardization such as Max von Stephanitz.

Max von Stephanitz believed that dogs should only be bred for working purposes. Therefore, he had very stringent ideas about the appearance and character of his ideal herding dog.

While attending a dog show, Stephanitz found the dog that matched his high expectations. He subsequently bought the animal and created the Society for the German Shepherd Dog.

Stephanitz’s first German Shepherd was named Horand. This male went on to father a number of pups that were carefully inbred to expand the breed.

From German Shepherd to Alsatian

The German Shepherd Dog was first transported to the United Kingdom in 1908.

Initially, the reaction to the breed was moderate.

However, after the First World War, the popularity of the breed rose quickly.

It is thought that this was due to the enthusiasm that returning soldiers expressed for the dog.

There is a touch of irony to the breed’s rise in popularity.

Post-World War I, there was an epidemic of anti-German sentiment in the United Kingdom, which led the UK Kennel Club to re-register the breed under the name Alsatian Wolf Hound.

Subsequently, the ‘Wolf Hound’ was dropped and the German Shepherd Dog became known as the Alsatian.

The name was adopted by several Kennel Clubs around the world and remained for almost sixty years.

It was not until 1977 that the original name was reinstated by the Kennel Club.

I remember my grandmother having a German Shepherd. She was such a beautiful, smart and loyal dog. I have never heard them called Alsatian before. I learned something new today!

These are one of the best dogs ever.

I will pass this article on to my sister. They have a German Shepard and sure she would love to read this!

Interesting bit of history of this dog. Smart dog by any name.

I didn't know they were also called Alsatian. I knew they were from Germany, though, lol. Thanks for posting!