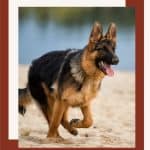 German shepherd dogs are some of the most amazing pets, helpers, and companions you can find in the canine world!

I would go so far (speaking from the position of owning several German Shepherds in my life) to say that once you have had a German Shepherd in your life, you will never be without one!

They are simply that amazing! 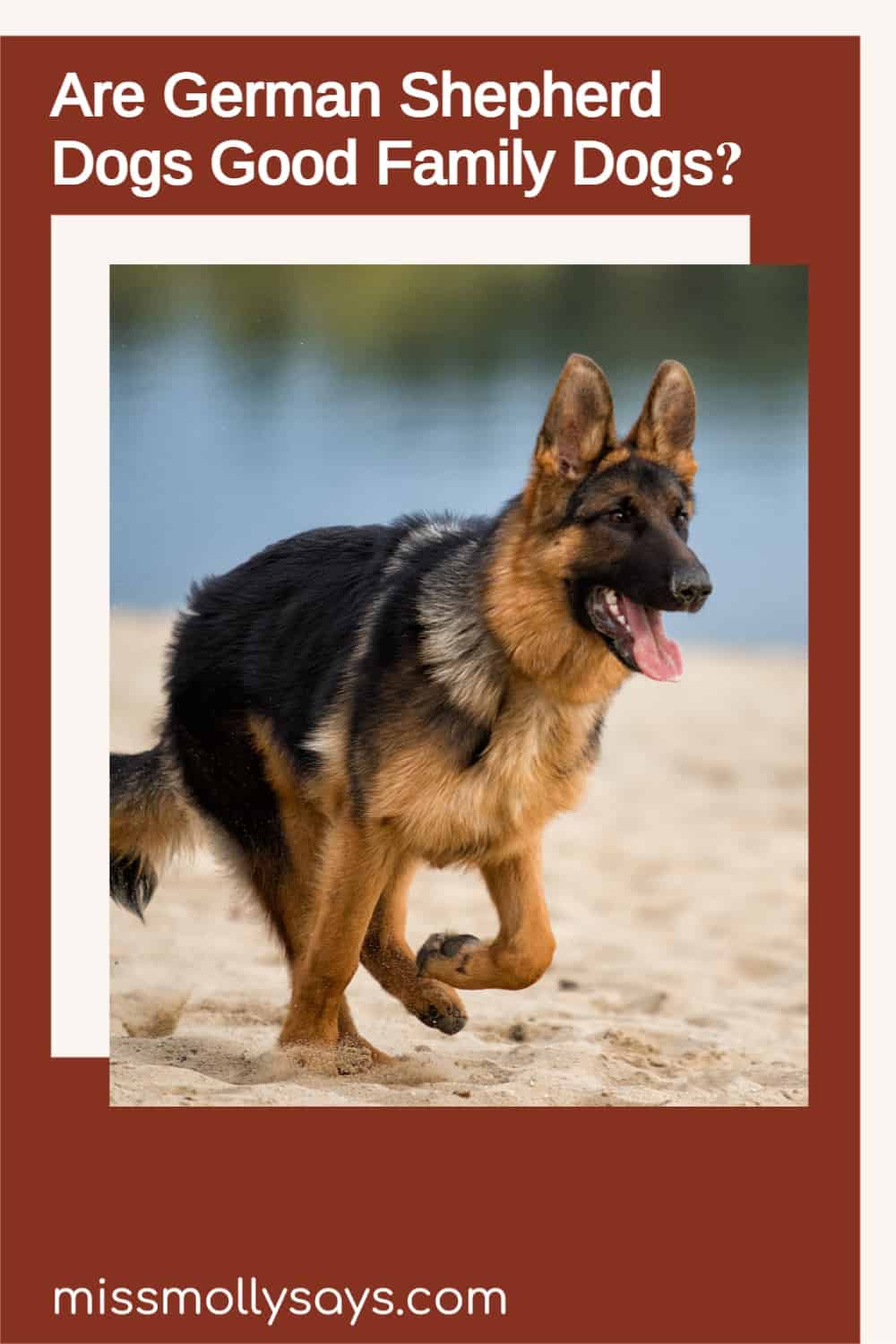 Let’s take a look at some of the things you should know about these wonderful pups!.

Just a tidbit of history on German Shepherd dogs – Max von Stephanitz is known to have registered a German shepherd in April of 1899.

That is practically where the history of the German shepherd began.

The German shepherd is an excellent choice for police work, guiding the blind, acting as a guard dog, sheepdog, or even serving in the military, or rescue service.

There was a program that aired in the U.S. about a German shepherd, Rin Tin Tin: K-9 Cop.

Since then many of us know German shepherds as K9s. Dogs that help cops with their duties.

The German shepherd can hear, smell, and see much better than man alone.

They can sniff out drugs, like you and I inhale the scent of grandma’s chocolate chip cookies 🙂 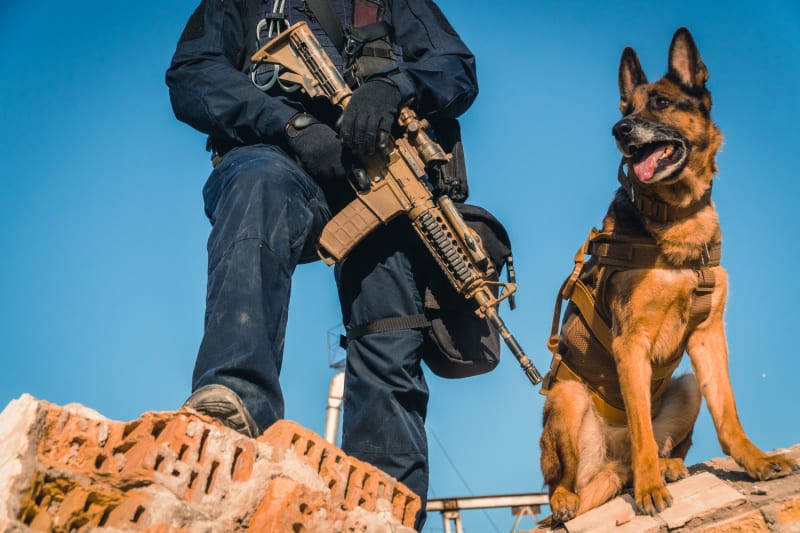 One of the more popular breeds among those serving were German shepherds.

During that time, many families sacrificed their dogs to help in the war. What a sacrifice!! 🙁

Very few of the dogs returned home but those who did were labeled as heroes.

As you can see, German shepherds play a great role in our everyday life as working and military dogs. 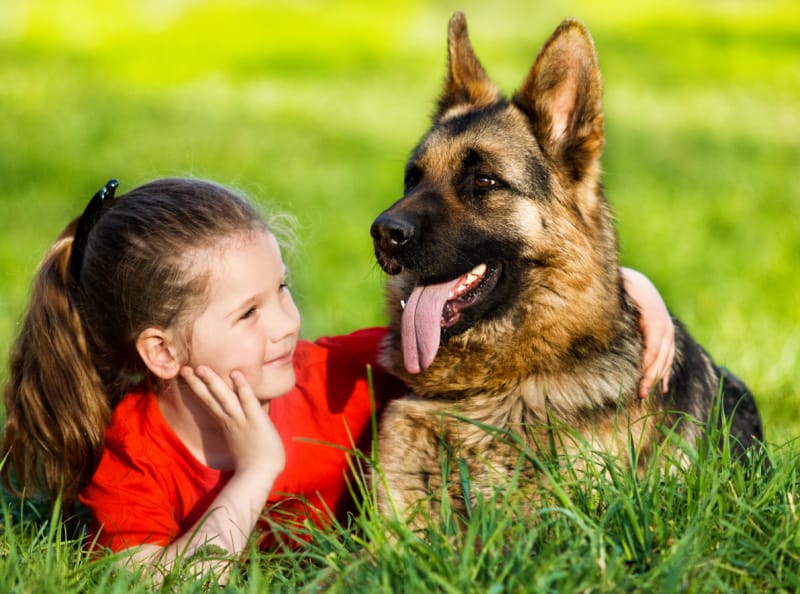 They are one of the smartest and trainable dogs out there. They are also loyal to no end!

Although German Shepherds are known for being loyal and courageous pets, they need something in return.

I am not talking about money or anything like that. They simply need love!

Once your loving pet/companion is stocked up on the mushy loving stuff, it will respond better to commands. And, once learned it will surely not forget.

It is important as an owner of a German Shepherd to be firm in your guidance and let them know YOU are the leader.

I am not talking about cruelty – simply firm and consistent guidance!

In addition, always allow time for ample exercise (as they are high-energy) AND make sure they are properly socialized at an early age.

This will result in an amazing, trained, and lovable dog. 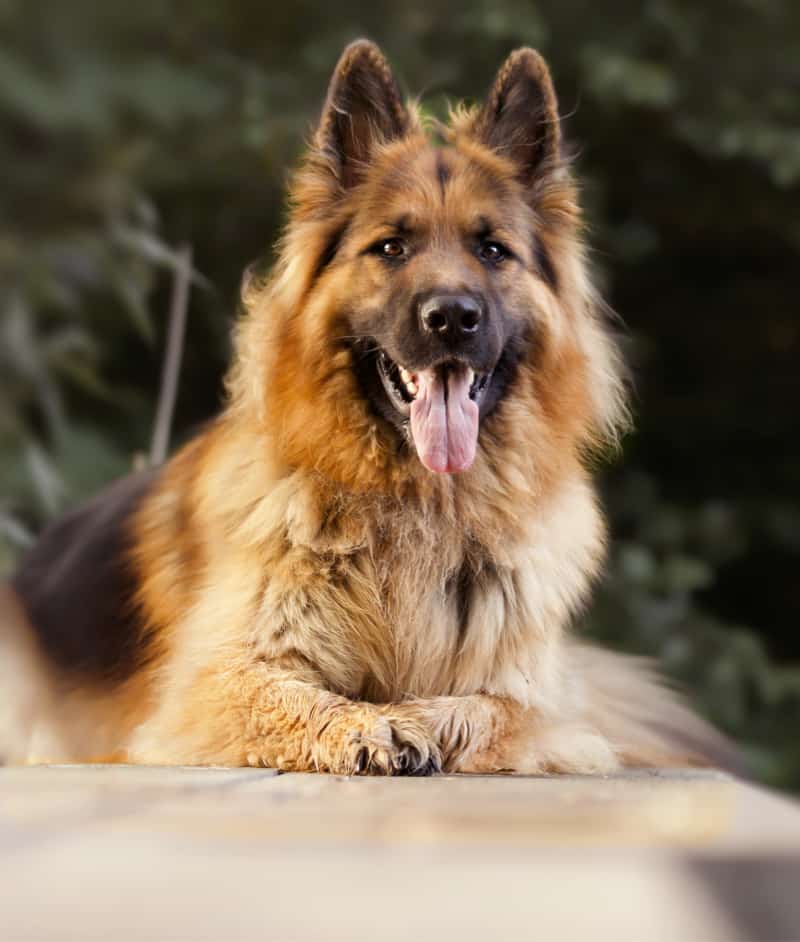 German Shepherds have an alert cautious nature about them. You can almost see the wheels turning in their mind as they are judging the pros and cons of something.

However, once they size up the situation they can be lovable and friendly.

On the flip side, when faced with danger or a threatening situation, they can be equally ferocious.

German Shepherds also become very attached to their pack (family) and are very protective of family and home.

Some German Shepherds have longer hair than others. 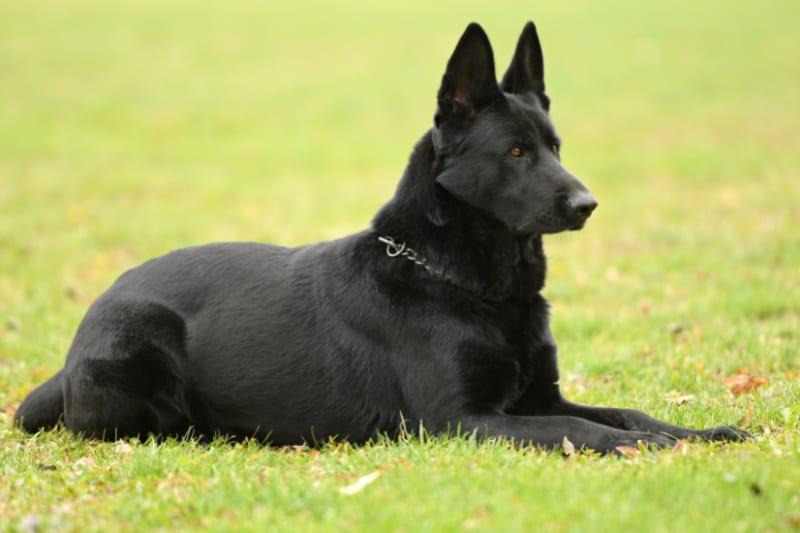 German Shepherds come in a variety of colors.

They also come in: 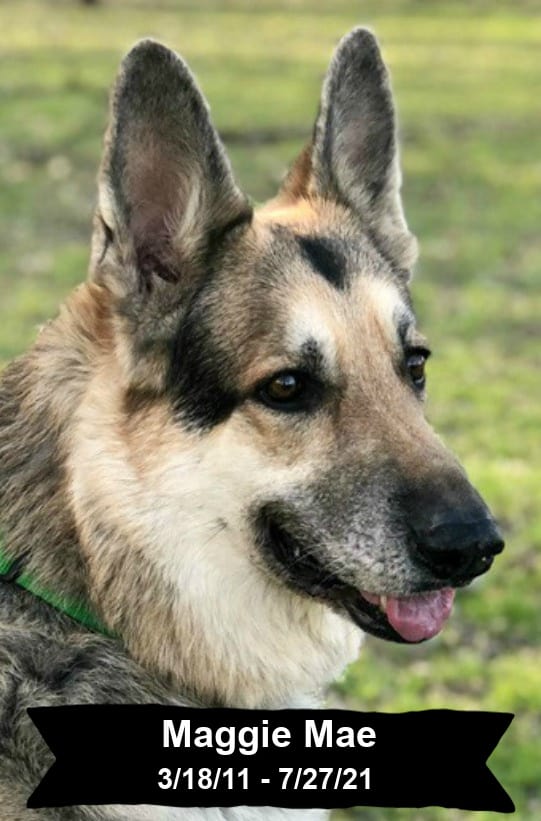 Post dedicated to our sweet loving German Shepherd – Maggie Mae. She was certainly a very smart, loving, and good girl!

It is important to note that I am listing the standards below.

However, your German Shepherd can certainly be taller/shorter or heavier/skinner.

Our own Maggie Mae (that recently passed away) was certainly WAY above standards.

She was a huge female at over 100lbs and taller than normal. And, no, she was perfect weight according to vet standards for her build 🙂 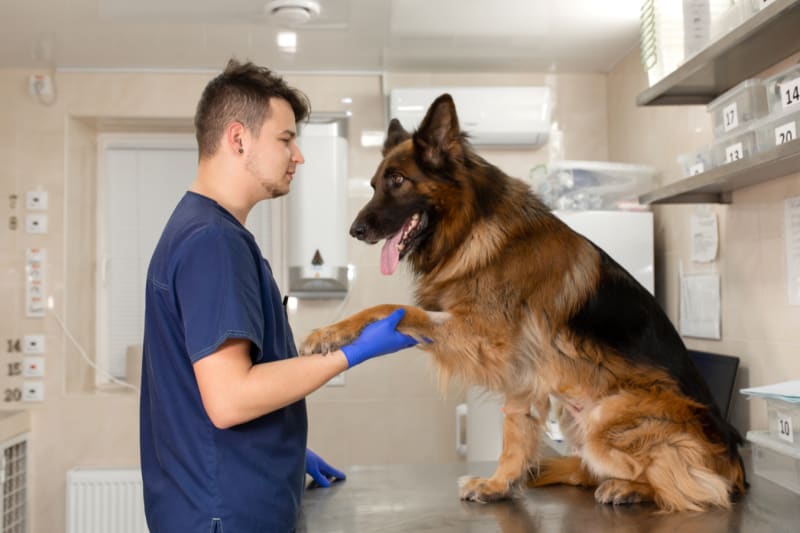 German Shepherds are generally healthy but can have several health problems such as:

Hip and/or elbow dysphasia – is at the top of the list! Many German Shepherds and other large breeds can die early from hip and joint disease. Many of the severe health problems are inherited.

It is an inherited blood clotting disorder

Digestive problems – runny stools, gas, and bloat are common but easily controlled with a proper diet and care.

Epilepsy – is a common inherited condition and usually begins between six months and three years of age.

Pituitary Dwarfism – It’s a genetic disorder in which the pituitary gland does not make enough growth hormone. It is most common in German Shepherd Dogs 2 to 6 months of age and can result in slow growth and various health problems, along with a limited life expectancy. If your dog gets these genes from his parents there is a very low percentage you can save him.

While some health issues are heredity, not giving your dog proper care can sometimes cause health problems also.

If this is the case, make sure you are feeding a good quality diet, giving proper grooming care, AND getting proper veterinary care. 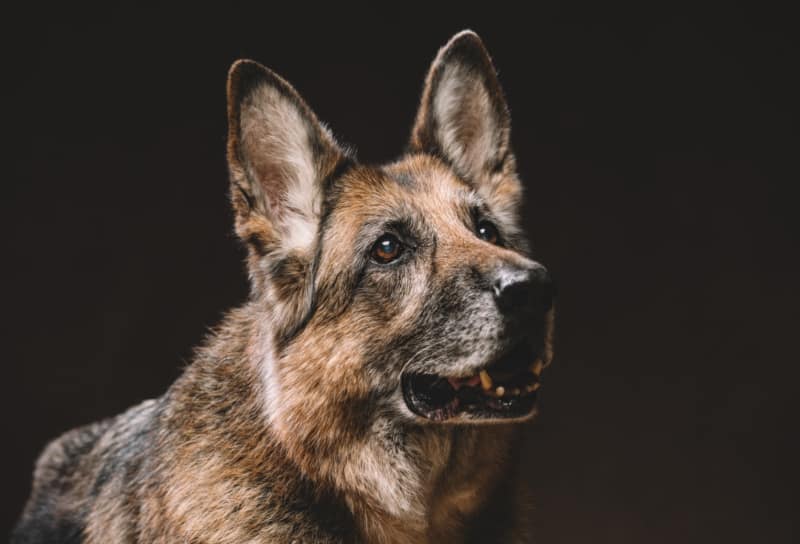 German shepherds are expected to live for a good 10 to 13 years.

To make sure your pup is at their healthiest, make sure to NOT overfeed.

Overweight dogs have a higher risk of devolving health problems, that includes heart trouble and arthritis.

Being overweight can also aggravate hip/elbow dysplasia if they have the condition.

A good grooming routine is certainly in order as German shepherds shed year-round.

A daily brushing or at the very least 2-3 times a week would be a good option.

Make sure to trim your shepherd’s nails regularly – about every two weeks – to prevent foot problems. 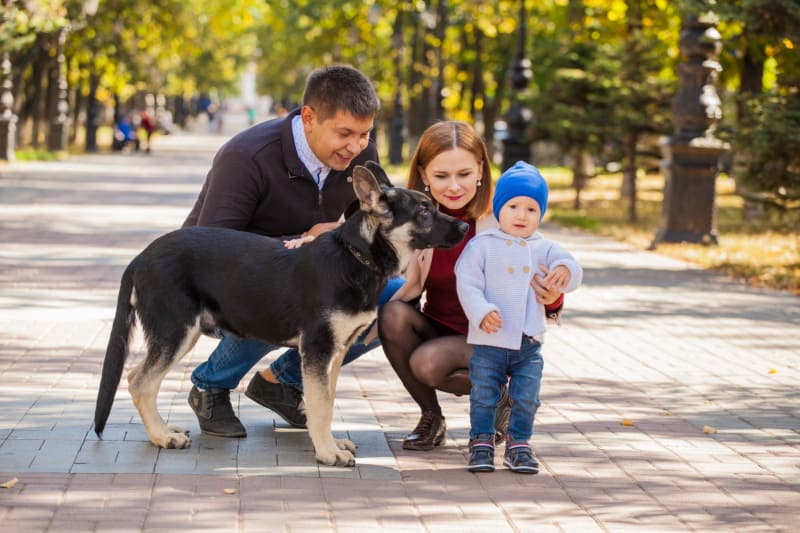 They have also proven to be great at emotional support dogs!

Their love and loyalty, and trainability are above reproach!

With all that said, you do have to put in the work, training, and MOST IMPORTANT – LOVE!!!

Once you do, you will never regret it! I promise!!

I think you are very attached to this breed. Good looking, smart dogs. Shed, shed, shed.

My brother has an 8 month old Shepskie - German Shepherd and Siberian Husky mix. This pup is the silliest, yet the smartest and sassiest pup. He is still young, but he has been great with my kids and my mom's other dogs. They also have a cat and he tolerates the cat and they sleep together.

I had a half German Shepherd half Siberian Husky named Sadie. She was my heart dog!! She passed away at the age of 10 with bone cancer. But, you are right! She was one of the smartest and loving dogs I have ever had.