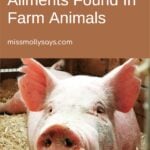 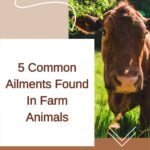 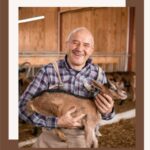 When you live on a farm, much of your day is centered around taking care of various animals, some of which may include pigs, sheep, cattle, goats, chickens, and even some dogs and cats.

Even if you do your best, it is inevitable that some of your farm’s animals will at some point get sick with this or that.

If you are wondering which ailments are common in farm animals, here are five you should remember.

An infection caused by a fungus, ringworm will focus on an animal’s skin, hair, and nails.

Affecting cows, pigs, goats, rabbits, and virtually all other animals found on most farms, it spreads via direct contact.

Symptoms will include small areas of hair loss on the ears, face, or legs, as well as skin that appears scaly and crusty.

Once noticed, a vet can easily treat it with medication.

A common disease of beef cattle, the pink eye does just as its name implies, meaning the animal’s infected eye turns pink or reddish in color.

This ailment occurs when the cornea is damaged from trauma, dust, dirt, or even sunlight, which then allows bacteria to enter the eye and infect it.

However, pink eye can also be found in dogs and many other farm animals.

If you use dog pink eye products such as drops, the condition can clear up within one month.

Yes, farm animals can get the flu just like humans.

Pigs and chickens are especially susceptible to influenza on a farm, and it can be a highly-contagious ailment that spreads rapidly throughout a population.

Symptoms will include discharge from the nose and mouth, sneezing, trouble breathing, fatigue, and no appetite.

In chickens, it can also lead to decreased egg production.

A problem for sheep and goats, the Orf virus spreads through abrasions or cuts in the skin.

Many farm animals get this ailment because they have harnesses on them regularly, meaning they chew on them and become infected.

Symptoms include sores on lips, mouth, and muzzle.

Fortunately, most animals recover completely from the Orf virus.

Finally, E. coli is an ailment found in many farm animals, especially cattle.

However, it is more prevalent in newborn farm animals, such as calves.

The most common sign of E. coli is diarrhea. In most animals, the problem will run its course within one week.

If you suspect any animals on your farm are suffering from these or other ailments, always contact a veterinarian who specializes in caring for farm animals to get an accurate diagnosis and the proper treatment.