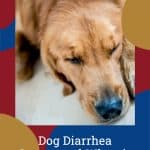 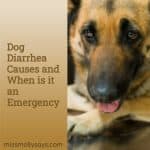 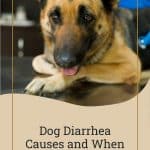 Dog diarrhea is one of the most common causes for a vet visit and many pet owners panic when they see an abnormal stool, but understanding why this occurs can go a long way toward helping both animal and owner.

Toxins, unfamiliar foods, non-food items, medications, parasites, microorganisms like giardia, viruses, and various diseases and illnesses can all cause inflammation to the lining of the organs that comprise the digestive system.

Dog treats and diarrhea are another common occurrence. Too many dog treats will cause an upset stomach and a nasty round of diarrhea!

When this inflammation is present, the body cannot properly extract water and nutrients from the stool, which also passes through the system at a rapid pace.

The result is diarrhea.

Dog Diarrhea can take on many different appearances.

Light brown stools are often the result of excess bilirubin and iron in the system. In addition, lighter brown stools commonly occur due to the lack of time spent in the intestines.

Feces can take on a green-brown hue when bile, produced by the liver to digest fats, passes through the intestinal tract without being properly processed.

Black stools can result from blood in the digestive system and therefore, should be cause for concern, although it should also be noted that certain medications, like pepto bismol, can cause black stools for a day or two.

Blood in the stool

Small amounts of blood can also be present in cases of acute diarrhea, due to swelling and irritation that’s present in the digestive tract.

Blood, particularly larger amounts, can often be present due to a dangerous condition known as an intestinal obstruction.

In the case of a complete obstruction, there will be a lack of movement through the digestive tract due to the blockage.

In the case of a partial obstruction, some matter can pass the blockage site, which is often bleeding due to irritation and damage from the item that has caused the obstruction.

For many cases, a stool sample is required for testing.

This is particularly true when parasites or microorganisms are suspected.

Pet owners are encouraged to collect a fresh sample within a few hours of visiting the vet to aid in the diagnostic process.

In addition to the typical signs of illness, intestinal system emergencies can also include symptoms such as blood in the stool (with significant amounts present, or if the blood is present in more than two bowel movements), bright green stool (which often indicates toxicity), and dehydration.

This is good information to have on hand if my dogs ever need it.

This is good to know

This is an interesting post. These are things that are good to know if you are a dog owner.

Thanks for the tips

After one singular episode of diarrhea, if my dogs are acting normal, I usually wait a day. But, it has to be one episode and they have to be hydrated since diarrhea can take a lot of water out of a dog. If any doubt, best to get them in to the vet.