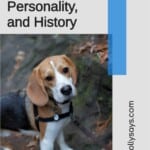 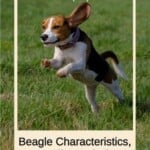 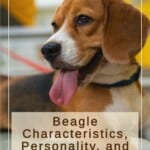 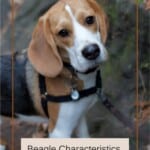 When it comes to a fun and lovable dog, it is hard to beat a beagle! Beagle characteristics and personality make them a favorite for family dogs and as hunting or working dogs.

If you are thinking of adopting a beagle into your family, you are in the right place to learn all about these wonderful dogs.

Let’s start with their history …

Beagles are among the smaller breed of dogs and fall under the scent hounds which is quite similar to the large foxhound.

They were initially developed to hunt hares as they possess a great sense of smell and great tracking skills.

This breed plays a critical role in the detection department as they are instrumental for contraband searches such as agricultural imports and foodstuffs in quarantine locations around the world.

They also make great pets as their size is just about right, their temperament is cool and they don’t generally inherit a lot of health problems.

The current breed we now know was developed around the 1830s in Great Britain and possibly a mix of Southern Hound, North Country Beagle, Talbot Hound, and some traces of the Harrier.

They have been featured a lot in Elizabethan times via paintings and literature and now in comic strips and television.

The real origin of the Beagle breed is not known; however, they are the smaller version to Harrier and the Southern Hound where similarities are concerned.

History has it that during the 11th century, William the Conqueror took the Talbot Hound and the St. Hubert Hound to Britain where they were crossbred with Greyhounds to create dogs that have increased speed and stamina for hunting.

Back in time, the word beagle was used to describe the smaller hounds even though they were quite different from the modern breed.

The miniature type beagles were frequent during the times of Edward II and Henry VII who kept them as pets.

The smaller dogs would be carried on the person while the larger ones would head out to hunt prey.

As the hunting gets easier, the smaller ones would be released to aid the process in the more space-consumed areas.

Elizabeth I owned these dogs which she labeled as her “singing beagles” which would generally entertain her guests at her royal abode.

The breeding process continued and during the 18th century, two additional breeds were developed which they used to hunt rabbits and hare – these were the Southern Hound and the North Country Beagle.

The Southern Hound’s physique included a tall heavy body with long soft ears and a square head and could be closely related to the Talbot Hound.

It was relatively slow but it boasted lots of stamina and could detect through scent.

As for the North Country Beagle, they could be a possible mix between a Greyhound and the Talbot Stock.

They were relatively smaller and featured a tinier and pointed muzzle and were much faster than the larger breed.

After learning about beagle dogs and their history, I am sure you have specific questions.

We will try and address the most common questions below.

Beagles are known to possess a gentle disposition and an even temper and could be passed off as the “merry kind”.

However, depending on the individual they are dealing with and how much their safety depends on it, they could show a little bit of aggression.

They are not so easily inclined toward strangers, but they can be won over quite easily but with some reservations still in place.

For this reason, they won’t make a good guard dog but their howls and barks do make them great for watching.

Beagles are a determined set of dogs who are quite intelligent and single-minded.

While working on a mission, it is not so easy to call them after they have picked up a scent to complete a task.

They are also known to get distracted easily by scents and smells around them.

Leaving them unattended for extended periods could see them getting bored or distracted and might not do so well with obedience training.

Beagles can suffer from separation anxiety which could see them becoming a little destructive if they have nothing to do or they are left alone with no company to cling to.

But they do function well with being alert, food-reward training, and are not hard to please.

They are not demanding with exercise as seeing they are built with stamina in mind, they don’t get tired so easily.

The breed is prone to weight gain but this can be controlled with exercise and proper dieting.

What are the Health Concerns of a Beagle Dog?

Beagles generally live anywhere between 12-15 years which is common for dogs their size.

In addition, Beagles are known to have trouble with epilepsy, but this can easily be controlled with medication – you can talk to your vet about it.

You may also see your dog developing a possible case of dwarfism known as Hypothyroidism.

The breed which is called the “Funny Puppy” could develop the case in severity where they develop slowly and eventually get weak legs and crooked back.

This neurological condition can cause wobbling and a drunken gait.

They are generally healthy but could be prone to other illnesses related to Beagles.

It is a condition where the immune system attacks the joints while the dog is still at a young age.

Fortunately, and sometimes, steroid treatments can relieve these symptoms.

Another concern is their ears. Since they have long floppy ears, air may not penetrate the inner ear and moist air and particles could get trapped.

In order to avoid ear infections, it is best to clean their ears often or possibly have your vet do the job.

There may also be cases of failure of the nasolacrimal drainage system which could result in leakage of tears or some cases, dry eye.

Whenever they roam freely, it is important to check if they have picked up any parasites such as harvest mites, ticks, tapeworms, or fleas as if left untreated could lead to further health issues.

Also, if it sounds like they are choking, it may not necessarily be the case as it could be reversed sneezing where they insert air through their mouth and nose – it is not harmful to them.

What are the Different Beagle Coat Colors?

Beagle coat colors could be the same but the patterns are different.

You have to pay close attention to realize even some of the shades are different.

You may come across Beagles with the following colors and patterns:

What are the Physical Features of a Beagle Dog?

Beagles resemble a miniature Foxhound but with a broader head and shorter muzzle.

They usually weigh around 18 to 35 pounds and stand around 13 to 16 inches – the females are a bit smaller and lighter than the males.

The large ears are long and soft and turn towards the cheek.

Their necks are strong and medium-length and have a semi-broad chest.

The most common beagles are tri-colored…white with large black spots and light brown shading.

Their coat shades come in various patterns but most with more than half their body covered in white.

What are the Nutrition Requirements of a Beagle?

What you feed your Beagle is very important and crucial to their overall sustenance and growth.

Their diet is critically important to balance their weight, digestion, growth, energy, and power they use daily.

Whatever a Beagle eats could be either good or bad for its health, so it is vital to choose food that has a balance of all nutrients.

Yes, they are one of the best dog breeds to have around your kids.

They are more on the friendly side with limited aggression – only if the situation seems threatening where strangers are concerned.

With that said, please always supervise young kids around any dog!

Beagles do shed but it is not noticeable as their hair is short.

However, they shed more in the spring as their coats get thicker during the winter.

They are generally clean and only get dirty when they are messing around with dirty stuff- mostly outdoors.

As such, they don’t need to have frequent baths.

In essence, Beagles are cool dogs to have around, and they make great companions for kids and the elderly alike.

They also seem to get along with other household pets well so you might want to consider them on your “potential list” of dog adoption options.

They are so cute. Thanks for the interesting information.