As you know, all pups have to go through house training to be a respected member of the household. Some of us catch on quicker than others and we all have a different way of lettin’ our humans know we need to do our business WOOF! My Lady was talkin’ to a friend of hers the other day and found out she just adopted a new pup named “Ham”. Ham is in the process of potty trainin’ right now. So, we decided they needed to be the ones to test out a fun Paws2Go system! 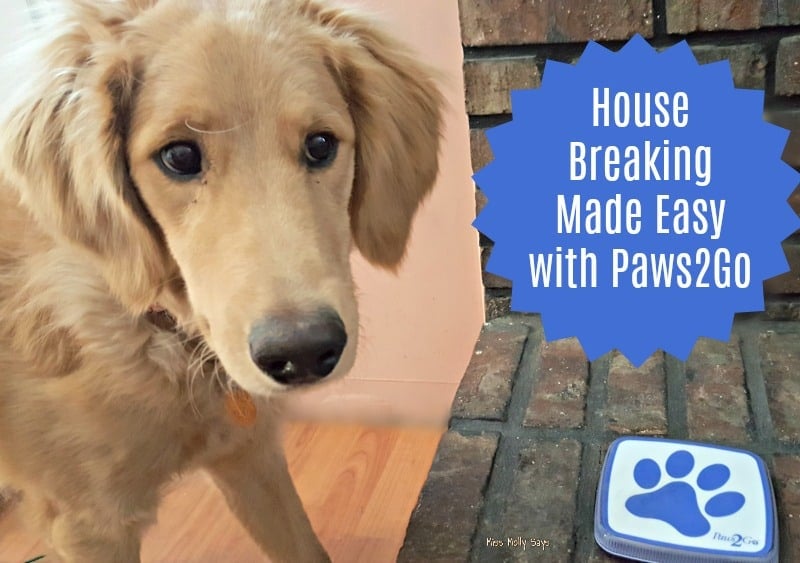 He is a smart guy and doin’ right well with it! His Mom is so proud of him and his progress! Lemme fetch Ham’s mom to tell ya more about the fun Paw2Go!

Here’s Ham’s mom to tell ya all about the fun Paws2Go!

Dogs are a wonderful addition to any home, aren’t they? They come in all shapes, sizes, colors, and temperaments, just like people! Whether you have just one dog or you have a whole house full, there’s a fact of daily life that doesn’t change, no matter the dog you have: housebreaking. I’ve seen some dogs that just pick it up instantly and have very few problems with it. Others seem to struggle with it constantly, much to the dismay of the homeowner. But one thing is clear, the easier you can make it on your dog, the easier it will be on you! Let’s learn about housebreaking made easy with Paws2Go. 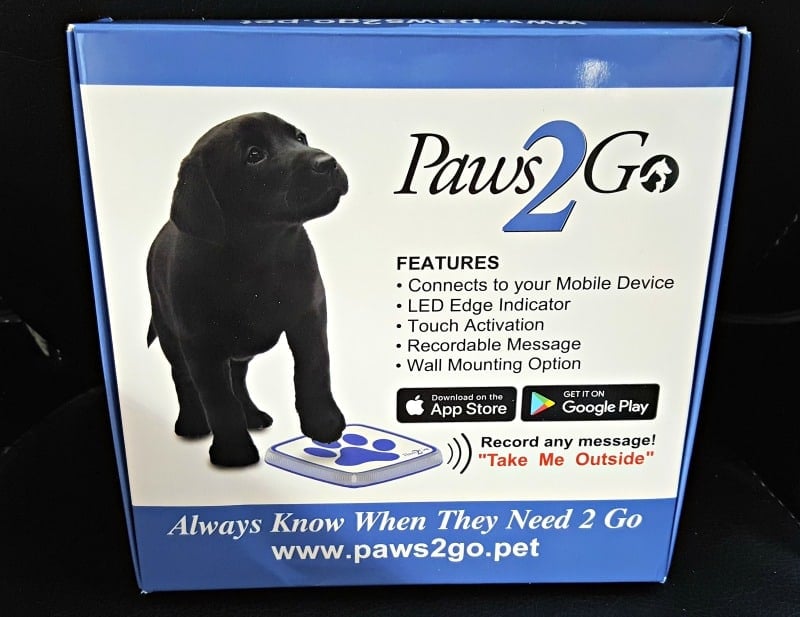 Place Paws2Go on the floor or mount it on a wall. Train your pet to touch the Paws2Go when they need to go potty outside. Once touched, the Paws2Go will play back your personalized message, the sides of the device will flash blue and it will send a notification to your mobile device using the free Paws2Go app. Paws2Go is a modern approach to housebreaking your pet which maintains the simplicity of hanging potty training bells from a door knob.

I recently adopted a puppy, a Golden Doodle named Ham. We call him Hamsome or Hamster for fun! He had received some potty training from the breeder before we took him home. She taught all of her dogs to ring the string of bells she hung on the door handle. This worked well for us honestly, unless I was in another part of the house and couldn’t hear the bells clearly. And now I’m spending more time on different levels of my home as I move my office upstairs and I’ve started sorting through my basement storage and crafts area. I hate the idea that Ham rings the bells like he’s been taught, only for me to not always respond. 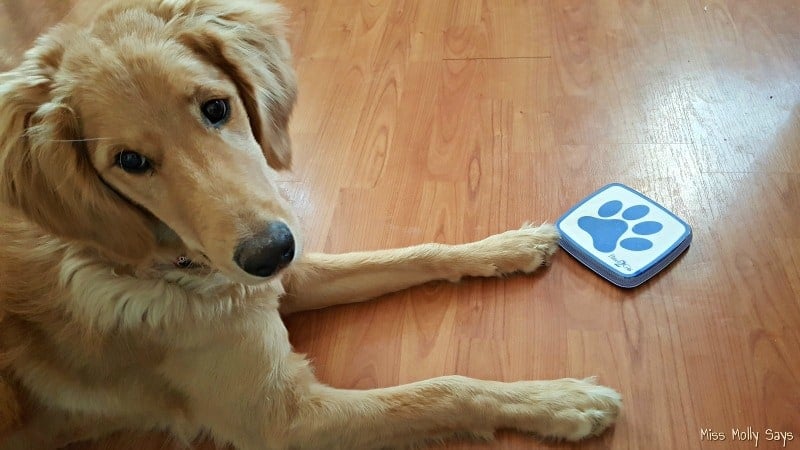 This is a small plastic square with a dog print in the middle that uses 3xAAA batteries. When your dog steps on it or presses on it anywhere with their nose, it starts the notification process. It will light up around the edges with the LED lights. There is a pre-recorded message that plays for your pet through the speaker (this could be your voice, song, or any other sound clip). Then a notification is sent to your phone, letting you know your dog has activated the Paws2Go! No matter where you are within the house, you know that the dog needs to go out because you see the lights, hear the message sounding, and get a text on your phone. All the bases are covered!

Paws2Go is great for big or small dogs since it takes very little pressure to set it off. It can be set on the ground, say by the back door, or even mounted on the wall. Since Ham is going to be a tall dog when he’s grown, we’re going to mount it so he can nose it instead of stepping on it and sliding it on the hardwood floor.

You can record up to 10 seconds for your dog’s message. This can be a supportive “Good job” message, or “I’m coming to take you out”. It could also be a soft song or sound that your dog likes to hear. Anything to help them remain patient as they wait for you to arrive. It’s up to you in how you want to set it up. And it’s easy to keep clean, just wipe it with a lightly damp soapy rag to remove any surface dirt. 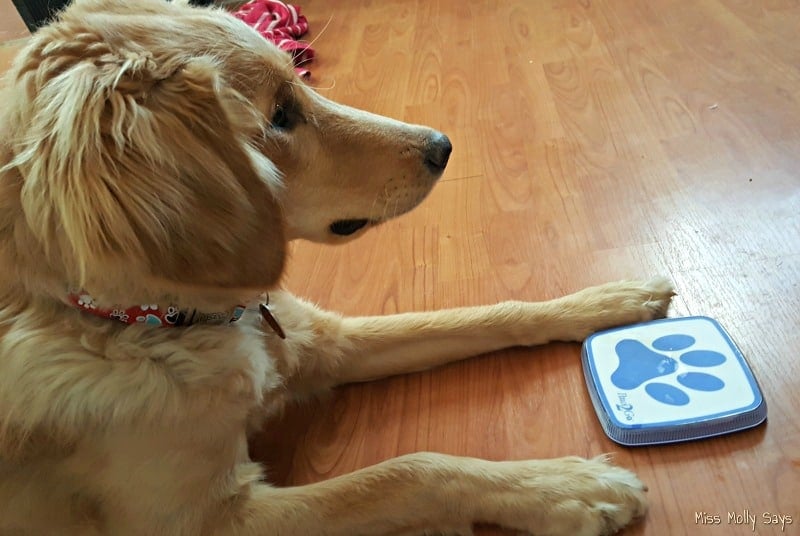 Like I said before, we had to transition from the bells hanging from the door handle to the Paws2Go unit. It didn’t take too long, and we actually kept the bells for a little while and Ham would use both the bells and Paws2Go. Then we took the bells away and he uses the Paws2Go exclusively now. He quickly learned that by pressing the button, I would come from wherever I was at in the house to let him out. And sometimes he steps on it and other times he uses his nose. I’m not sure why he goes back and forth, but it works so I’m not complaining. Even when I moved it off the floor and onto the fireplace so the robot vacuums could sweep the floor, he went straight to it the next time without missing a beat. 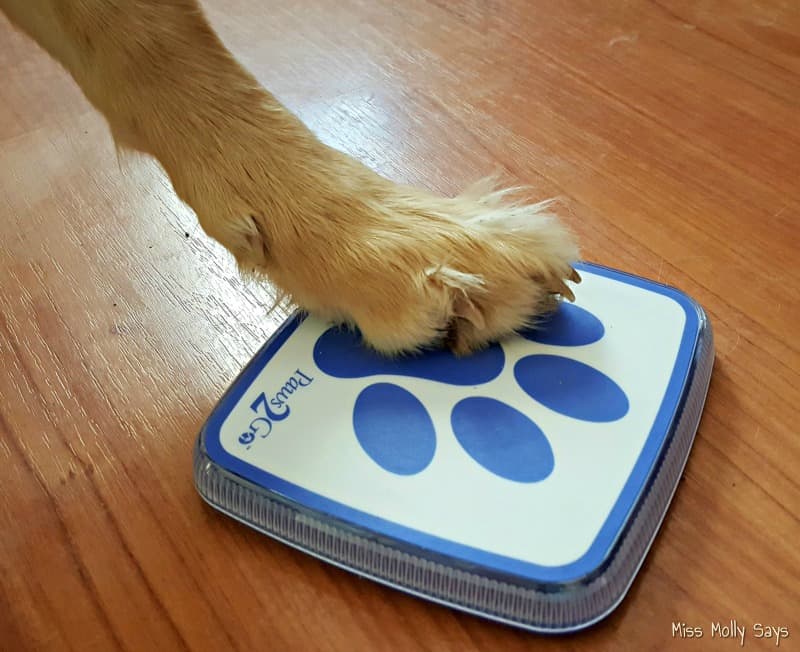 Funny story about Ham and the Paws2Go unit

A few days ago I was upstairs doing some housework and he was on the main level. Suddenly my phone started going off with multiple text message notifications. I was worried something was going on with one of the kids, but no, it was the Paws2Go app telling me that Ham was saying he needed to go outside. Well, after pressing it that many times, I went downstairs in a hurry, worried that he was urgently needing to go outside! Do you know what I found instead? Ham had the unit on the floor between his paws, slapping it with his paw and listening to the message of me talking to him. He didn’t need to go out, he was just playing with it and hearing my message for him. Goofy dog! 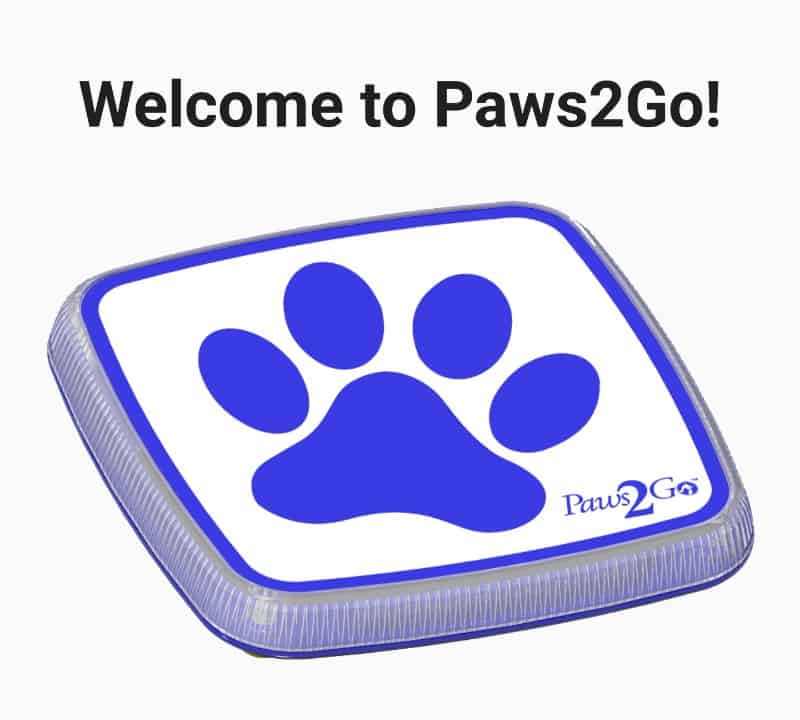 I love that this is very simple to set up and multiple people can install the Paws2Go app on their smartphones to receive the alerts. If I’m not home but my husband is, Ham can still be let out without having to go find Dad. It would also be great to have if you have a dog sitter. They may not know the dog’s cues yet. Nothing changes for the dog since he just steps or noses on the unit but the person knows to let him outside.

Their website also has some great videos about setting up and using Paws2Go, and lots of tips to train your dog how to use it. And you don’t have to have a smartphone to use Paws2Go, you just won’t get alerts and instead rely on the flashing lights. Or perhaps you will hear your dog “talking” back to the unit like I walked in on with Ham! 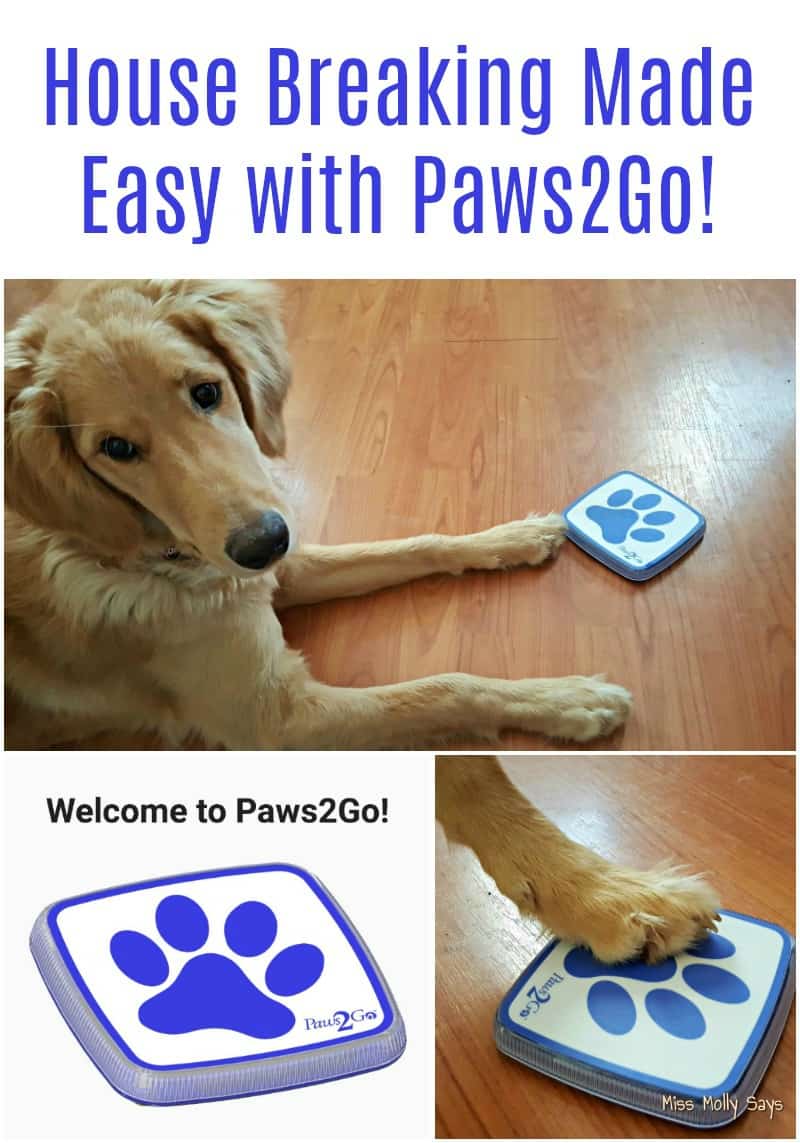 I would definitely recommend Paws2Go to any dog owner, new or experienced. It offers several ways to assure both your dog and owner that the dog needs to go out and you’re on your way to him or her. It’s a snap to set up and personalize for your dog. Be sure to check out the Paws2Go website to read reviews, watch videos, and order one for yourself!

Make sure to connect with Paws2Go on social media:

This looks really handy but had not trouble with my Yorkie.

What a great training device, thanks for your review.

This is my first time hearing of the Paws2Go and I am truly amazed! My dog is 11 years old and fully trained but would buy and give this a try for a new pet.

Wow, the things they think of these days always amazes me. This sounds like a great item for all pet lovers to have in helping to prevent accidents in the home.

What a great idea! This may take some work but I would surely give it a try!