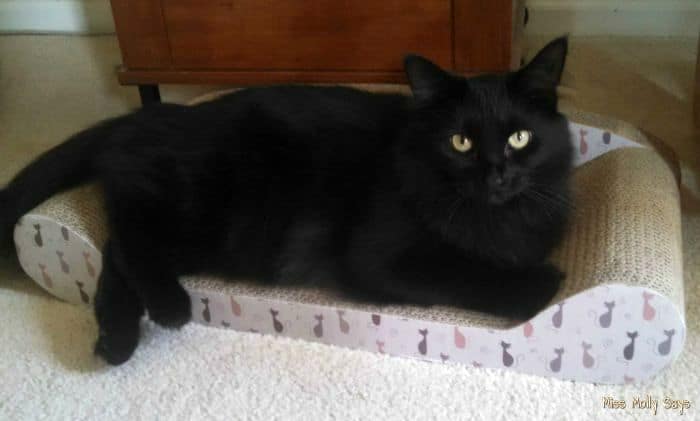 About Kitty Couch by Feline Be Mine:

The Feline Be Mine story began when the founder’s cat, Mango kept scratching the carpet and leather furniture whenever she was stressed.  There wasn’t enough space for cat condos or cat trees in Mango’s small apartment.

Feline Be Mine was launched in early 2015 in a quest to find a better product to keep Mango occupied and active. In the meanwhile, Kitty Couch was born. It was designed to keep cats scratchy and busy, away from your precious furniture.

This unique cat lounge is made out of 100% recycled cardboard. The surface is grooved allowing Kitty Couch to double as the perfect cat scratcher. In addition, Kitty Couch comes with a complimentary bag of cat nip. Sprinkle a small amount into the couch and let the fun begin!

I had the privilege to test out Kitty Couch on my finicky feline Goldie. She is very particular about what surfaces she will touch. She doesn’t like carpet or upholstered furniture. I know that is crazy but we live with it! When I discovered Kitty Couch was made out of corrugated cardboard I was excited to see how she would react to it. 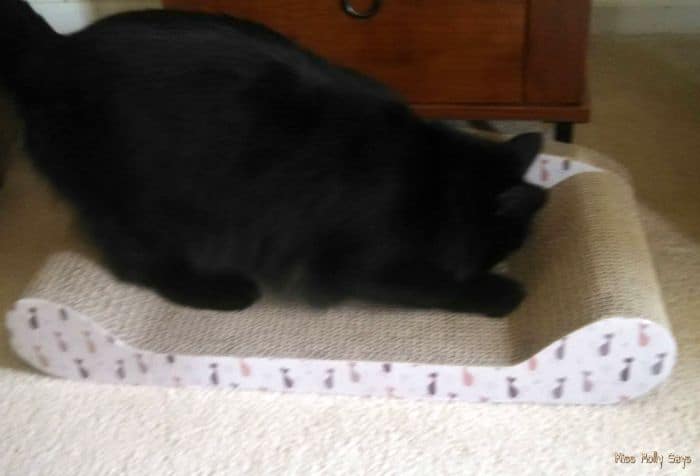 When I opened the box and pulled out Kitty Couch, Goldie was immediately drawn to it. She immediately started walking around sniffing it. I poured a little bit of cat nip into the couch and she jumped on it and started scratching. She was declawed when we adopted her but she never lost that instinct! I think it’s safe to say Goldie LOVES Kitty Couch. 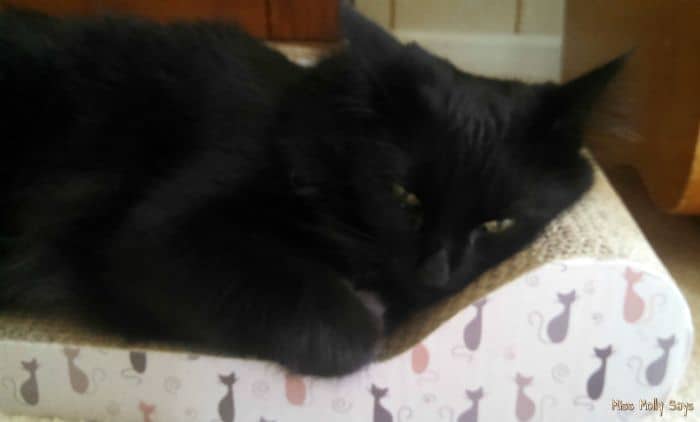 Kitty Couch has become more than just a bed and scratcher for Goldie. It is also a safe haven. If she hears a loud noise or becomes spooked, she runs to her couch! I am thrilled because my fur baby has a place to rest and relax. She used to sleep on hard surface chairs, on top of dressers, or on side tables.

She looks a lot more comfortable now. Doesn’t she? Thanks, Kitty Couch! Want one of these nifty Kitty Couches’s for your feline friend? You can find them on Amazon!

Connect with Feline Be Mine on

This kitty couch is so cool! I know my kitty would absolutely love it! There is just something about that material that makes them wanna scratch! And my cat goes crazy over catnip!

I think my cat would love this Kitty Couch. He is 15 yrs old and still is very playful. Your cat looks very comfy on it.

My cat would love this!