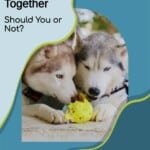 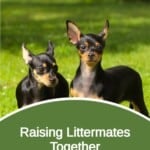 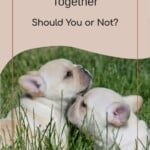 We have a subject that keeps cropping up around here and that’s “raising littermates together”.

There are a lot of questions about the subject as in can you or should you.

Some folks say it’s fine, while others are totally against it.

We have littermates in our family (Ozzy and Brandi). They are true brother and sister from the same momma.

Sorry for the blurry pics EEK!

Let’s talk about Raising Littermates Together:

Most vets agree that raising littermates is not a good idea.

Some will flat out refuse to let you even try, but if you do find yourself with sibling puppies either by choice or because you find them in your shed in a snowstorm as we did, know that it can be done but it will be hard.

You still have to do all the things that you would do to train a single pup, but know you have to do it for each of them individually, then for both of them together.

Also, know that those cute little fluff balls will eventually grow up!

I’ve raised littermates twice and have had good luck with it, but even if you do everything right, there’s a chance that they will never get along and you are forced to re-home one of them, for their own safety.

So, if you are thinking about it, here are a few things to keep in mind.

A few things to keep in mind when raising littermates:

Each puppy needs their own space and toys!

This will prevent them from fighting over things and teaching them to sleep apart will reduce the chance that they will develop separation anxiety.

Train them individually before you even attempt to train them together.

It lets you train them better because the other will not always be around to distract them, meaning they will focus on you and learn better.

Training separately also encourages them to bond with you and not just with each other.

It will also teach them it is ok to be apart, also reducing anxiety.

Once they are trained by themselves, work on teaching them to obey individual commands while they are together.

Spay and Neuter them

If you have a choice, get opposite sexes and have them spayed or neutered.

Two males are more likely to fight each other than two females, but if the females do fight, it’s more likely for the fight to end in serious injury or even death.

With opposite sexes, you are less likely to have behavioral problems.

One-On-One Time is a Must!

It is very important that you give each of them ONE-ON-ONE time with you, even after the training period ends.

This is important for them to grow independent and learn to socialize with other dogs and people.

Raising littermates is hard work, but if you know what you are getting into and do it right, it can be done.

I have had good experiences with it, but I also put in the extra work and training, in addition to spending individual time to make sure they bonded with me.

In both instances of me raising littermates together, they grew up to be well-behaved dogs who are the best of friends.

Ozzy and Brandi are all grown up now and are doing very well!

It has been an exhausting time, but we now have double the fun!

I have two dogs from the same mom and dad, but they are one litter apart.

I really don't know if I'm for or against it. I'm not an animal person.

OMG! What sweeties & I agree with you...raise them together.