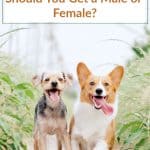 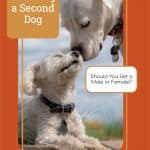 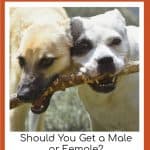 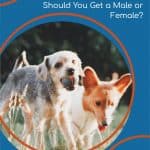 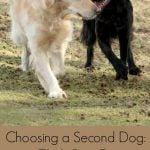 Are you considering getting a second dog? Maybe you are wondering if you should get a male or female?

Adding another dog to your family can be a lot of fun, for both you and your current dog! However, it’s not a step to be taken lightly.

To avoid potential conflicts between the two dogs, you’ll want to make sure to make the best choice.

In particular, you’ll want to consider carefully what gender to adopt for your pup, dog or Doodle.

Moreover all of above, We love Doodles, more than anything, They are cute and social pets.

If you are worried about training you should look into a few online classes from popular trainers to start.

To help you out, here are a few points to consider when deciding if you should Get a Male or Female second dog!

If you are choosing a second dog for the family, should you get a male or female?

Hopefully, these tips will help with that decision.

In general, when it comes to deciding whether you should get a male or female, opposites tend to work best.

A male dog will have fewer issues with a new female dog, and vice versa. This has to do with dominance.

Physical fights may occur as dogs of the same gender fight to become the alpha.

But if you have one male and one female, each can be the alpha of their own gender, reducing the risk of fights.

But if you do get another dog of the same gender, a pair of males may be less likely to get into fights than a pair of females.

When considering whether to get a male or female, you should definitely consider your current dog’s temperament.

If they’re sweet and playful and always get along with the other dogs at the dog park, they may be fine with a new dog of any gender.

Laid-back breeds like Beagles, Cocker Spaniels, Basset Hounds, and Golden Retrievers are more likely to be fine with dogs of the same gender since they have such dog-friendly temperaments.

However, German Shepherds, Dobermans, Rottweilers, and other breeds with strong, dominant personalities are likely to have a harder time cooperating with other dogs of the same gender.

You should also take your current dog’s age into account when deciding whether to get a male or female second dog.

If your current dog is a puppy, they’re likely to be more receptive to a new dog or puppy entering their life, regardless of gender.

Since puppies are in the stage of their life when they’re easiest to train, you’ll be able to quickly teach them what kind of behavior isn’t appropriate when around the other dog.

As puppies grow up, the possibility of dominance fights may increase.

However, if dogs have grown up together they’re likely to be able to tolerate each other pretty well.

If your current dog is small and your next dog is going to be big, it’s possible they won’t consider themselves similar enough to be worth having dominance fights.

A male Dachshund can think of himself as so different from a male Greyhound that he doesn’t even consider starting a fight and instead the two become good friends.

Of course, there are exceptions to any rule.

You’ll know a bit about the two dogs’ compatibility when they meet, but you’ll have a better idea of their relationship once they’ve been living together for a few weeks.

Regardless, make sure to introduce them carefully, give each their own things, and be ready to correct any bad behavior.

Have you ever owned multiple dogs at once?

I had two male Dogs. My original dog was a Minton male, and when I wanted to adopt another dog, I had picked out another small male dog and he went nuts growling and barking, then I brought a small female dog over and she was probably the same size as him and same thing, but then I bought an Italian greyhound that weighed 20 pounds as opposed to my dogs 14 pounds, and he got along with him instantly. they loved each other very much, but they didn’t cuddle all the time. They cuddled when we forwarded them, they had to be in the same cage and they would get upset, but around the house they were kind of sitting on different places. So I thought now that my 15-year-old men pan has passed that I might try a female puppy to pair with my Italian greyhound who is also about 11. And the one I am considering is a Havanese, which is a very small dog, a lot smaller than my greyhound.Any advice would be appreciated.

We are thinking of adding a sibling to our doodle/groodle. She’s 18 months old and we are on a waiting list for a full sibling …. I’d prefer a female dog but after reading this maybe a make dog. They will be full siblings. Any opinions?

I have a female chihuahua mix and planning to get another chihuahua mix. We had other dogs but they have died of old age and now Nala is alone.

i have a female half rotty half great dane . she 9 yrs old . she lost her best bud gus about 1 year. we are thinking of getting a puppy as a new frind. besse is fun and friendly and not agressive. although she is not a fighter she takes awhile to be comfortable with other dogs. she loved her old partner gus who died at 12. she has become more receptive to other dogs since he passed but i am wondering if the gender of the new pup will matter. my wife and i are both retired and have been raising dogs (mostly pairs) for along time. they where always. opposite sex. we where thinking of getting another female. nothing is set in stone. are two females a bad idea. kk

I was in the same situation 23 years ago, my old black Lab Blue, died at 13 and my female who was 4 at the time was lonely and sad, I took her with me to meet the dogs at the animal shelter and let her pick out the dog she liked best, which happens to be another girl and they are great togetther