Lately, we’ve had a whole mess of problems goin’ on here at our house! It’s hard to know where to start, but I guess I’ll start with the food stealin’ that been a happenin’ here. Since them pups have gotten big, they don’t seem to understand we aren’t suppose to take things from the table or that counter in the kitchen. Seems every time we get a new addition to the family, the same ole question of “how to stop your dog from stealing food” comes up! This time it’s with the pups, Ozzy and Brandi. 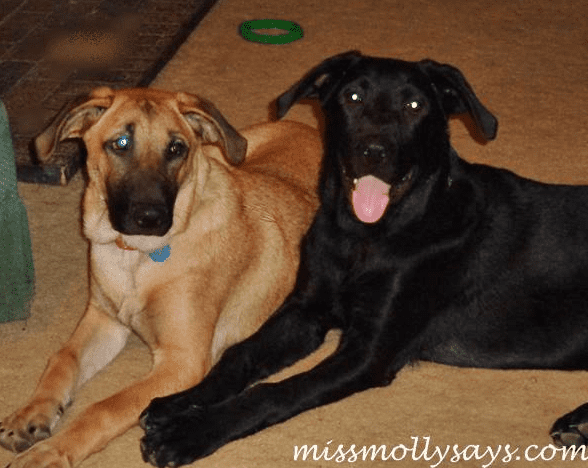 The culprits looking all sweet and innocent – Brandi and Ozzy

Just the other day, my Man had set a plate of food on the counter then left it for a minute. When he came back, there sat Ozzy – chewin’ on my Man’s chicken leg and lickin’ his big chops! Then another time, my Lady caught Brandi tryin’ to eat out of the skillet on the darn stove. My lady had a fit over that one! She said Brandi could a gotten burned or got hot grease on her, never mind the food part!

It’s not a good thing to have your food stolen and the food they’re stealin’ might not be good for dogs. My Lady’s workin’ on solvin’ the problem. That’s what I wanted to talk to ya about today. It sounds like an easy problem to fix. But, let me tell ya, most dogs left with a good lookin’ and smellin’ plate of food sittin’ right there on the edge..the very edge…so close… Well, you get the picture.

My Lady’s got her work cut out for her on them pups. Especially with two of em, it’s like havin’ twins 🙂 So, if you are wonderin’ how to stop your dog from stealing food, follow along and I’ll tell ya what my Lady is followin’ with them youngin’s.

Draw the line and take control

Hard as it is, the first thing you have to do is stop givin’ out table scraps. If ya give us food from the table, then try to tell us not to take food from the table or counter – it’s darn confusin’ to us! Ya got to let us dogs know that the food on the table and counter is YOUR food, not ours, and we ain’t allowed to have it. This gives us a boundary line that we aren’t suppose to cross. We can understand that. We may challenge it, but we’ll eventually learn.

Well, my Lady messed up and she’s a payin’ the price! She’s never fed us from the table while they eat. But, when they finished she would always give us a couple bites each of somethin’. I’ll be honest and tell ya them were right tasty and I looked forward to em! Oh, I hope them pups haven’t messed it up forever for us!

Them pups have to learn they won’t get nothin’ from jumpin’ up there. My Lady don’t punish em. She says that won’t work cause it’s a little to late by the time ya catch em if they already ate it. But she ain’t big on punishin’ anyways. She says praise when they get it right is the best way! The advice given to her was to make the counter-top scary by placing something really noisy up there for them to turn over such as cans filled with pennies. Like my Lady said, that’s a lot of area to cover with cans 🙁

My Lady found a way that seems to be workin’, IF ya can catch em in the act WOOF! She got her a squirt bottle and filled it with water. When they jump up, she squirts em dead in the face and says no. She tried blocking them from the kitchen, but them dogs are big enough to jump the baby gates! If she leaves the kitchen, she makes em go to their crates. It’s for their own good she says, so they don’t get hurt or eat somethin’ bad. I think she’s makin’ progress. These days, they’ve started layin’ in the dining room watchin’ ever move she makes WOOF!

Maintain Your Position as Pack Leader

If you stick to your guns and keep the rules the same, us dogs will respect you as our pack leader. If ya get all wishy-washy with the rules, that’s when we get confused. Lettin’ us do it sometimes, or givin’ food sometimes will lead right back to the problem your tryin’ to solve. My Lady’ll get them pups straightened out, but darn it…they ruined a good thing we had goin’ on with them tidbits!

For us dogs, ya gotta keep things cut and dry, black and white, yes and no. When ya get all iffy and maybe on us, we don’t know what the heck the rules are. So, we try it out to see if we can do it. Wouldn’t you? 🙂