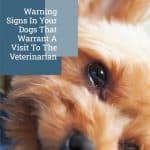 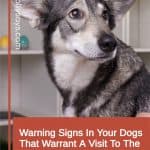 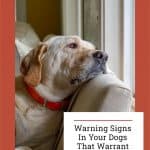 Taking care of our pets can be a constant source of concern and worry.

It’s important that you have access to a vet as well as the means to afford payments before you consider getting a pet as insurance doesn’t cover every cost and vet visits can be very expensive.

When owning a dog, there are a number of signs that you should look out for which may warrant a visit to the veterinarian, just to be on the safe side.

There are lots of symptoms that our dogs can show when they’re feeling a bit under the weather, and more often than not, many of these are just a sign that they’re a bit unwell, and it should pass.

However, to be certain that they’re healthy and happy, it’s worth considering a trip to the vet if you’re worried as some of these symptoms can be signs of more serious illness.

As humans, we know that sometimes you just don’t always have an appetite.

While we can choose when we eat, dogs can’t do that and instead will be given food when you dictate they should eat.

So, it’s best not to assume that their lack of appetite is necessarily something serious.

However, a change in eating habits can be a sign of something more serious, especially if it’s coupled with other symptoms like vomiting, drinking a lot of water, and whining.

It’s definitely worth visiting your vet to get them checked out in this case.

This could be a sign of a blockage or other digestive problems that either need to be sorted with surgery or medication.

We don’t breathe in the exact same way as our dogs.

For a start, our dogs will breathe much faster, and also pant to regulate their temperate when they’re too hot.

If your dog seems to be breathing abnormally, however, and you’ll probably be able to identify these changes very easily, it might be a sign of more serious problems.

It could be that your dog has an allergy to something and could benefit from antihistamine medication, or they may have even developed a virus making them feel run down and blocked up.

There are of course other serious problems that a change in breathing could indicate, so if they seem to be in distress or struggling to breathe rather than just breathing a bit quicker, you should consult your vet as soon as possible.

This is otherwise known as paroxysmal respiration and is a type of gag reflex when your dog is experiencing irritation in their upper airway.

For in depth information into reverse sneezing in dogs, use this resource from Native Pet.

Basically, this problem could be caused by a number of things, but it is usually an irritant, such as hair, grass seeds, pollen or if they have an allergy to something.

This isn’t often a cause for concern as it’s merely their body’s way of naturally removing these irritants, just like coughing or normal sneezing.

However, if this appears to be going on for some time and your dog is showing signs of distress, it might be that they’ve got something stuck, and this could potentially go on to block their airways.

Call your vet for information on what you should do before deciding.

Older dogs often get lazy and tired, so this isn’t always a sign of something wrong.

As we age we tend to slow down and run out of energy much easier.

However, if your dog is young and fit, a change in their energy levels could be cause for concern.

If they appear lethargic and more sleepy than normal, they might be struggling with an illness or is in pain in some way.

Look out for any signs that they may be favoring a limb or if there are any areas that are tender to the touch when petting them.

A quick checkup from your vet may put your mind at ease here, and if there is something seriously wrong, it’s better to catch it early so they can benefit from treatment.

If your dog appears to be having trouble balancing all of a sudden, this could be a fairly serious sign that something is wrong.

There could be the chance that they’ve sustained an injury and now they’re trying to avoid causing pain which is causing them to walk in a way that is unbalanced.

However, this could also be indicative of damage to the spine and neck, or even a neurological issue.

While it’s important to not panic here, as there are ways in which these problems can be sorted fairly easily, you should definitely speak to a professional to get a better idea as to what the issue is.

thanks for this! i will be on the lookout for these warning signs!

My dog is a family member. And usually you know when they are different. But these important things to watch closer for.

This is a great article, we have our first dog. I grew up with dogs, but I've never had one that was MY responsibility. She already had parvo as a puppy, but she survived.

Thanks for the info. I would love to have a dog, but one of the reasons I don't is financial. Owning a dog comes with much responsibility. Including taking the pet to the clinic regularly and in situations as explained in this article.

I think owning a dog is like having a baby, you must keep your eyes on them. I know this would scare me if anything happened to any of our dogs. @tisonlyme143