Sometimes dogs do mysterious things that we humans struggle to comprehend, such as rolling in fox dung as if it is a bed of rose petals, or perhaps worse, eating their own or another animal’s poop like it’s a gourmet meal. Dogs eating poop really isn’t anything new, but it can be worrying behavior that many owners struggle to deal with. In this article, we’ll take a quick look at why some dogs eat poop and when it is a cause for concern, so if you’re pulling your hair out wondering “why is my dog eating poop’ then hopefully this will help.

The question ‘why poop?’ can be answered with four words – they think it’s tasty. We know, that sounds gross, but the fact of the matter is, what tastes good to a dog is very different from what we consider fine dining. But aside from tasting good, the reason why dogs start testing poop can vary significantly, here are some of the most common reasons why they decide to try poop as a snack.

Some breeds of dog (we’re looking at the labrador), have an incredible appetite and would eat until they burst given the chance. To keep dogs at a healthy weight, we often have to feed them less than they would consider ideal and as such, they begin looking for other tasty treats. If your dog is eating poop simply because they like it, then you may need to try spraying the poop with a nasty tasting substance to stop them from eating it, or just remove the poop before they can gobble it.

Sometimes dogs also eat poop simply because they’re bored and it gives them something to do. The good news about that is that it is relatively easy to distract them away from their snack and the behavior can be broken by introducing more toys and activity. 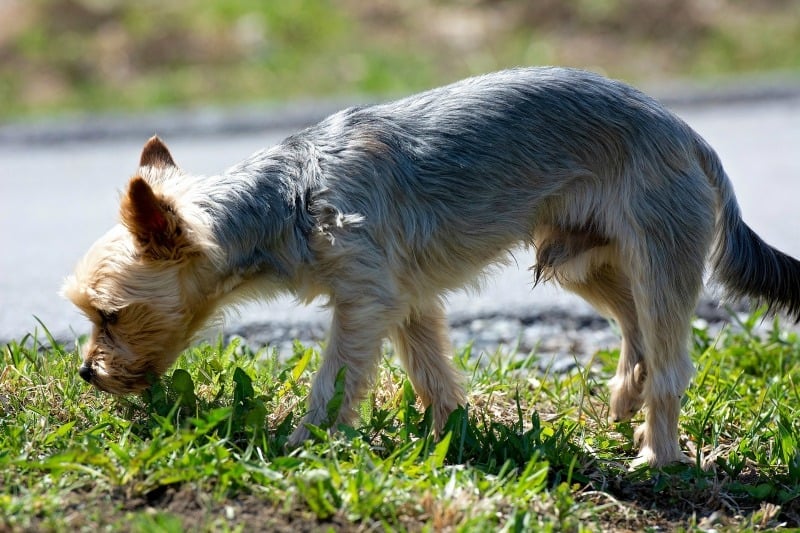 Puppies, in particular, will put anything in their mouths, including rabbits, cats, and virtually any other animal’s feces – sometimes even their own. At this age, puppies are simply learning the world around them and taste is a big part of that. Of course, you do not want to encourage poop eating, so try to train it out of them when you first spot it.

It is not uncommon for dogs to eat their own poop in situations where they are in fear of punishment. Adopted dogs that have been abused in the past may do this because they fear being beaten by their owner.

They lack a certain vitamin or mineral

Lastly, sometimes dogs turn to poop when they are craving a certain vitamin or mineral that they have not been able to obtain through their diet. If this is the case, then their poop eating habits will usually stop when they are given the right supplement.

What if your dog throws up?

Sometimes dogs throw up after eating poop because it just doesn’t sit well in their stomach, but other times, there could be more cause for concern. If your dog is throwing up a lot after eating poop, then this could be a sign that they have gotten sick from bacteria, or even contracted a parasite, and it is best to speak with your vet.

To us it is disgusting, but not so much for our pets. Good suggestions to control the behavior.