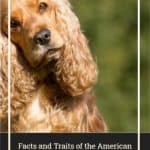 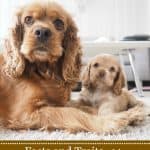 The American Cocker spaniel is a variation of the Cocker, sometimes called English Cocker, Spaniel. The Cocker Spaniel was brought to America from England and selectively bred.

At one time the English and American Cocker Spaniels were considered the same breed.

The American Cocker Spaniel was bred as a bird dog and the name Cocker comes from the Woodcock. This is a bird that Spaniels are quite good at flushing out.

Though the Cocker Spaniel was originally bred as a hunting dog it is primarily used as a pet and for a show dog.

However, they are also used today for hunting, agility, service and therapy dogs as well as tracking.

The American Cocker Spaniel is a little bit different from its English cousin in appearance.

The American version is smaller in size and lacks the Setter-like face.

The headpiece is usually the most stunning feature of the dog. Its ears should be long, hanging, and feathered.

Head should be rounded but chiseled to an abrupt stop.

The muzzle and jaw is the shape of a square.

The upper lip hangs down completely covering the lower jaw.

The teeth should meet in a scissors bite.

In black dogs, it must always be black but can come in brown as well in other colors.

The eyes are round and usually dark.

The Cocker sports a short back and compact package.

The topline should gently slope from front to back.

The front legs should be straight and all dewclaws should be removed.

The coat should be silky and long if it is not cut.

Show dogs must wear their hair long but many owners find a short haircut to be easy maintenance for pet dogs.

The coat comes in black, buff, parti-color, black and tan, and several other solid colors.

The tail should be docked to 2/5 the original length.

The dog should have a happy appearance with a constantly wagging tail.

The American Cocker Spaniel is a hunting dog and will be happy dashing through the fields after birds but just as happy curled up by the fire.

As with most breeds that have working and show lines, the working line is usually more active and driven towards the dog’s original function.

The Cocker is a very bold and alert dog that is very keen to work.

American Cocker Spaniels are usually cheerful dogs but one should look at the dog’s family line before purchasing a puppy.

If a breeder can’t give you background or won’t let you meet at least one of the dog’s parents don’t buy a puppy.

Poorly bred dogs can have a disorder known as Rage Syndrome (more common in English Cockers) in which the dog becomes aggressive and flies into an uncontrollable rage for little to no reason.

If the dog is from a shelter, observe its temperament carefully.

Cockers are normally obedient and easy to train. Though some dogs may be difficult to house train and might like to hear themselves bark, they usually are eager to please.

Socialization is a must as early as possible to prevent the dog from becoming too shy.

These gentle and trusting dogs are usually good companions for children.

They make decent watchdogs but are friendly with strangers and probably won’t physically defend the yard unless provoked.

As I stated before, one must be careful in selecting the dog as I have listed the qualities of a properly bred dog.

Some dogs are not as fortunate and have been bred in puppy mills as they are a popular breed.

These puppy mill dogs may have poor temperaments and problems socializing.

The American Cocker Spaniel is a dog that has been overbred due to the popularity of the breed.

This has led to inbreeding and some of the dogs may have health problems.

Some of those concerns are ear and eye problems like cataracts and glaucoma, ear infections, slipped kneecaps, heart problems, orthopedic problems, and IMHA, an immune disease that is nearly always fatal.

The eyes and ears of the Cocker require regular grooming to keep them free of infections.

Long coats require daily brushing to avoid tangles being careful not to pull the hair.

Bathing should be done frequently because long coats get dirty easily.

The Cocker is an average shedder.

This breed has an average of five puppies per litter and lives an average life span of 12-15 years.

Cockers make good dogs for people that live in apartments or only have a small yard.

They are relatively active indoors but will do alright if they receive enough exercise.

What's the difference between working and show, appearance wise?

I have never owned a American Cocker Spaniel. They are really pretty dogs.

I used to have cocker spaniels before. They were the sweetest dogs.

I love this breed! Great information! They do make great family pets. I have owned a few and hope to own another in the future :)

They are sooo cute! Thanks for the great article.