Hey y’all! Miss Molly here and this is some serious stuff! We know you want to make yer yard pretty and all, but ya gotta be careful what you use if you got fur kids that will be gettin’ near it. There is this stuff called Cocoa Shell Mulch being sold out there for landscapin’ your flowers and such.

Well, I hear tell that it smells just like chocolate cause it’s made from them there cocoa bean shells, and that’s what they make chocolate out of. I ain’t met a dog yet that don’t love the smell of chocolate and will try to wolf a bunch down if they git the chance! 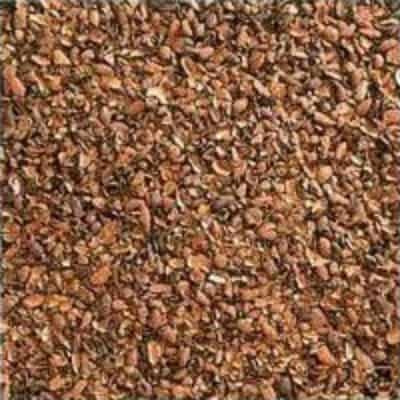 Thing is, chocolate is bad news and so is this mulch. Us dogs don’t know the difference and if ya ain’t watchin’, we will surely gobble some down. We don’t get that it will make us sick, we just like the flavor. Chocolate is some kind a yummy and it smells good too!

Well, My lady says this stuff has a ‘grediant called theobromine in it. Geeze even the word sounds scary, don’t it? Anyway, My Lady says that that stuff will make a critter real sick and stuff. Critters will throw up and even have that nasty diarrhea stuff and that ain’t no fun, let me tell you! It can make a poor dog’s heart race like he has just been chasin’ a ball full sprint for a hundred yards! Some dogs even get them seizure things!

My Lady says she has read some tales that the poor critter who ate some of this cocoa bean mulch stuff got so sick they didn’t make it! (Gulp) Now that’s scary and I feel sorry for them and their peoples, cause they prolly just didn’t know!

I know you all want to get your yards prettied up, but you really got to be careful with what you are usin’ if your critters are gonna be around it. I don’t know how much a dog can munch of that stuff ‘fore it makes ‘em sick, but why take the chance?

You gots internet, right? Do yerself and your critter a favor and look this stuff up, cause I hear the bags sure don’t warn you on how dangerous it can be to us four legged critters. I’ll even give you a start. Here read this from Poison.Org.

I have never heard of Cocoa Shell Mulch but it makes sense that it would make dogs sick. Thanks for the warning!

I hope more pet owners find out about this. Thank you for warning us.

This sounds bad if you have pets. I didn't even know this was a thing. My dogs like regular mulch so this would be horrible.

This sound not be allowed on the market. What a dangerous product to dogs. I am glad I read this post and found out about the mulch. Chocolate is not needed in our mulch for our yards!