Spring is here and we are so happy the weather is warmer! We like the pretty weather because we get to play outside more. We love runnin’ and playin’ and well, just sittin’ outside watchin’ the world go by is pretty fun too WOOF! But, what’s really fun is playin’ with a new Skamp Zogoflex Echo Dog Toy from West Paw! They are so much fun! You can fetch em, tug on em, and chew on em! 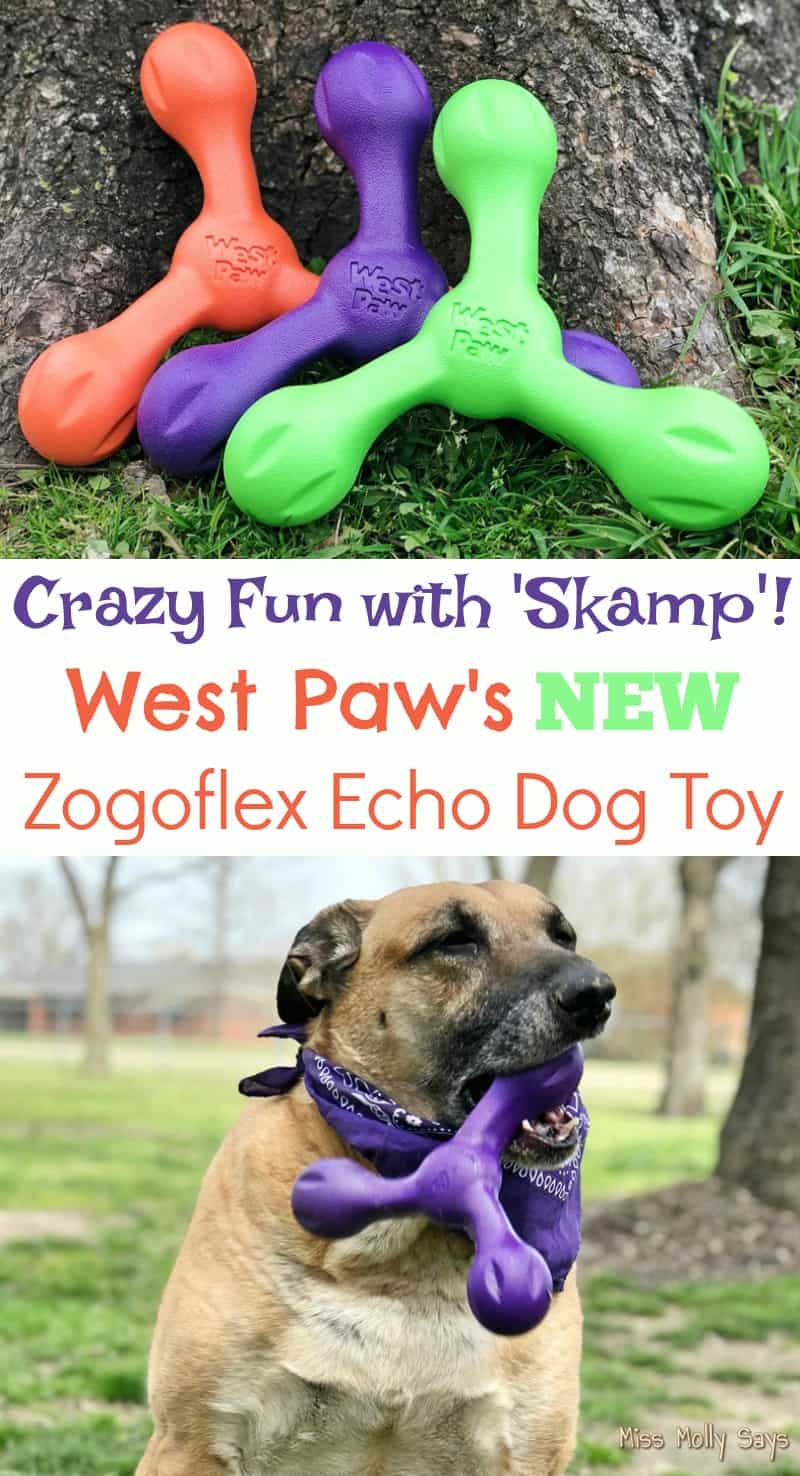 All us pups are havin’ crazy fun with the Skamp dog toys! It’s a little like our Zwig dog toy only the Skamp has 3 lobes on it! We got three of em in fun bright colors and they are our favorite thing to play with these days. I’m plumb tuckered out from playin’ so much and needin’ a nap. So, lemme fetch my Lady to tell more about em while I go grab a quick snooze WOOF!

The pups love chasing each other and playing with toys. They especially love tug-of-war games and of course, they love to just chew! All dogs chew, right? Since my pups are big chewers and players, I love keeping them supplied in toys that are safe AND fun for them.

Before I tell you more about the NEW Zogoflex Echo Dog Toy let me introduce you to West Paw!

WEST PAW is a Bozeman, Montana-based company that sustainably manufactures eco-friendly dog toys, leashes, collars, and beds. WEST PAW is a founding member of the Pet Sustainability Coalition, the first pet product manufacturer to become ad Certified B Corp and Montana’s first Benefit Corporation. Founded in 1996, WEST PAW products are sold in over 5,000 pet specialty stores across the US and distributed worldwide. 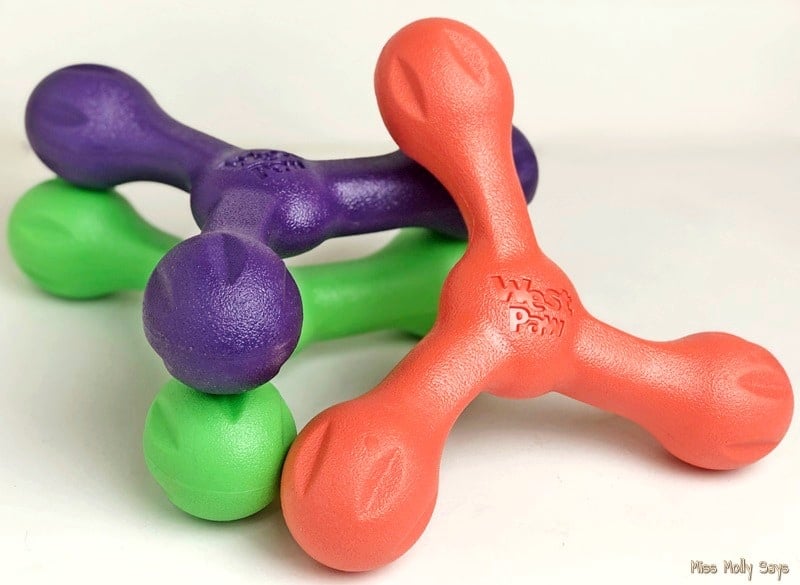 West Paw has added a new addition to their Zogoflex Echo dog toy line – the Skamp. The Zogoflex Echo Skamp dog toy is made for moderate chewers. It features a hollow core and has a soft texture that is easy on the teeth.

The 3 lobes of the Skamp makes it perfect for interactive play between dogs or between humans and dogs. It is also great for playing fetch as it will fly far and is equally as fun for water play because it will float!

Also of importance is that it is BPA and Phthalate-free, non-toxic and FDA compliant! You will also love that it is dishwasher safe. So, when it gets yucky, as dog toys tend to do, then just run it through the dishwasher! 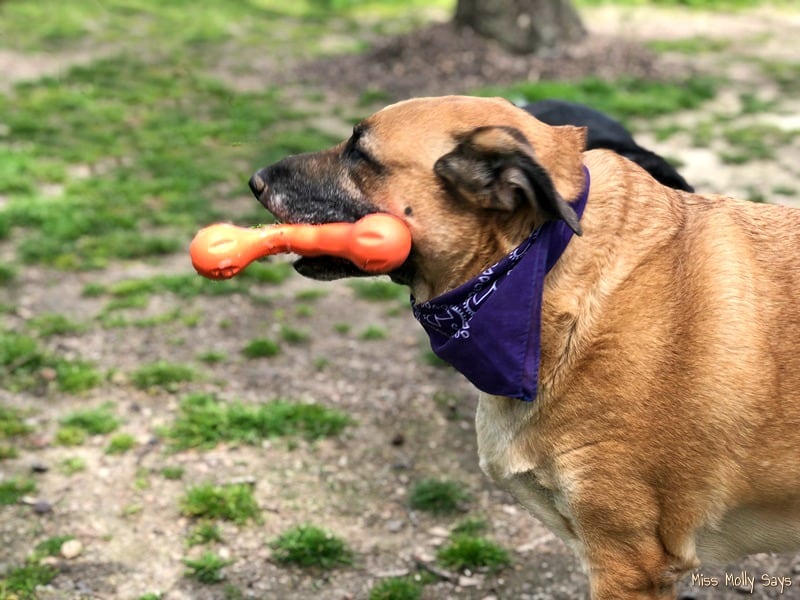 Brandi’s favorite game of all time is fetch! She tries to catch it in the air, but so far has unsucceeded. However, watching it land is just as much fun because it has a bounce to it that takes them by surprise. 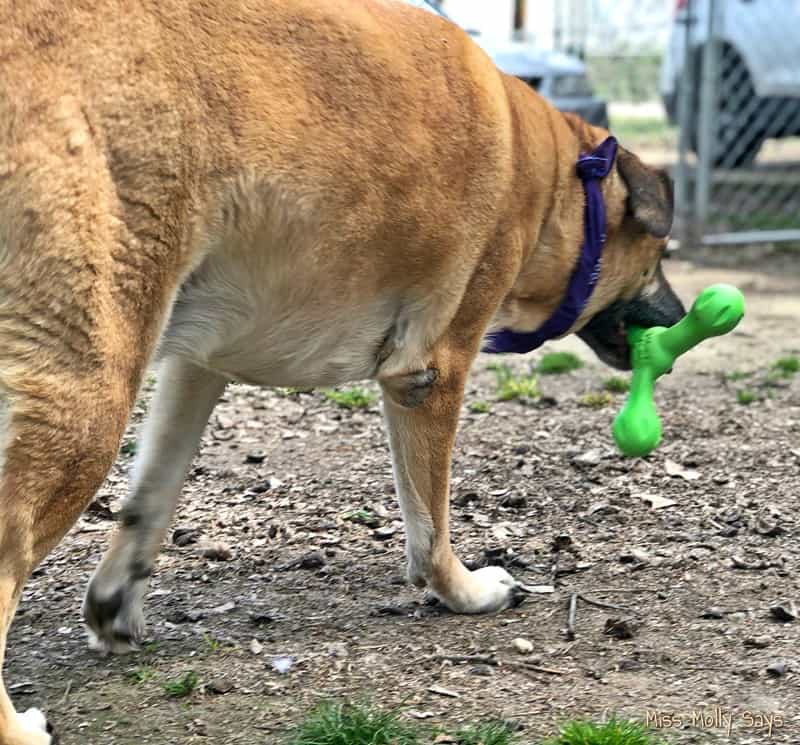 When she isn’t running and fetching, she carries one of her new Skamp dog toys around with her. 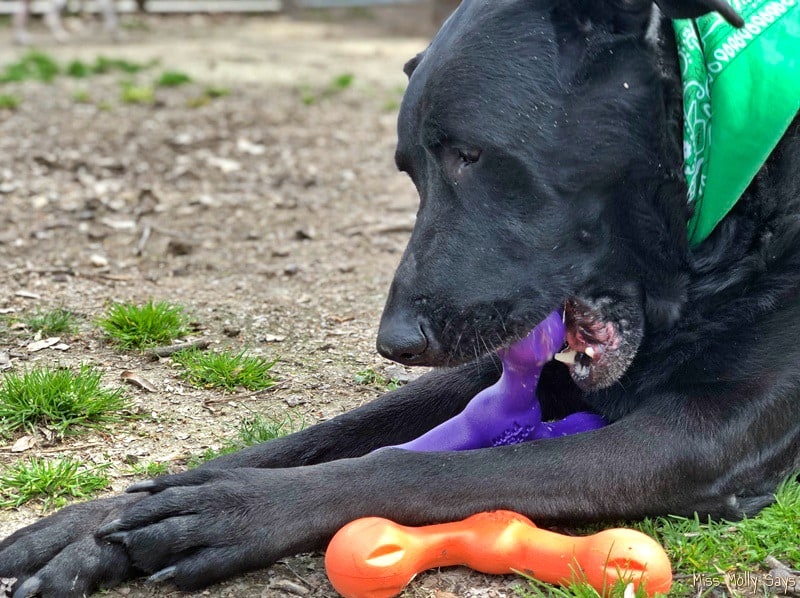 Big boy Ozzy likes the chew action. For dogs that like to chew, the Zogoflex dog toys are much safer on the teeth than sticks and other hard items. He also hoards as many of them as he can get 🙂 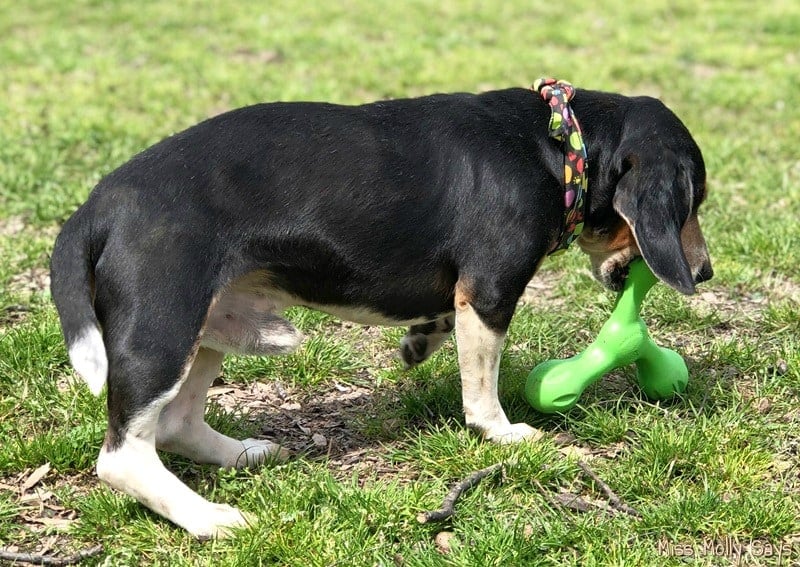 Little Rocky is the newest pack member and since discovering toys, he is not shy to get in on the action. He loves chewing on the Skamp Zogoflex dog toy too! 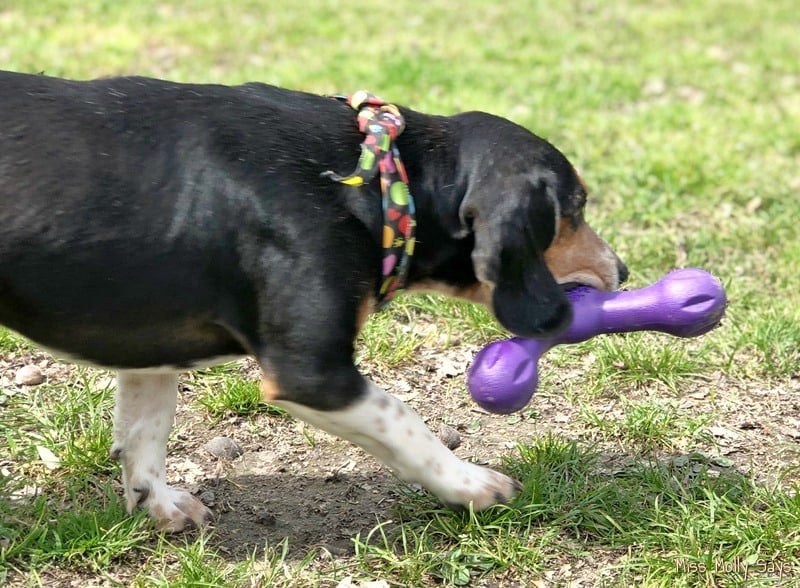 Of course, he also loves to get in on the fetch action! He may be small, but he is proving he can do everything the big dogs can do! 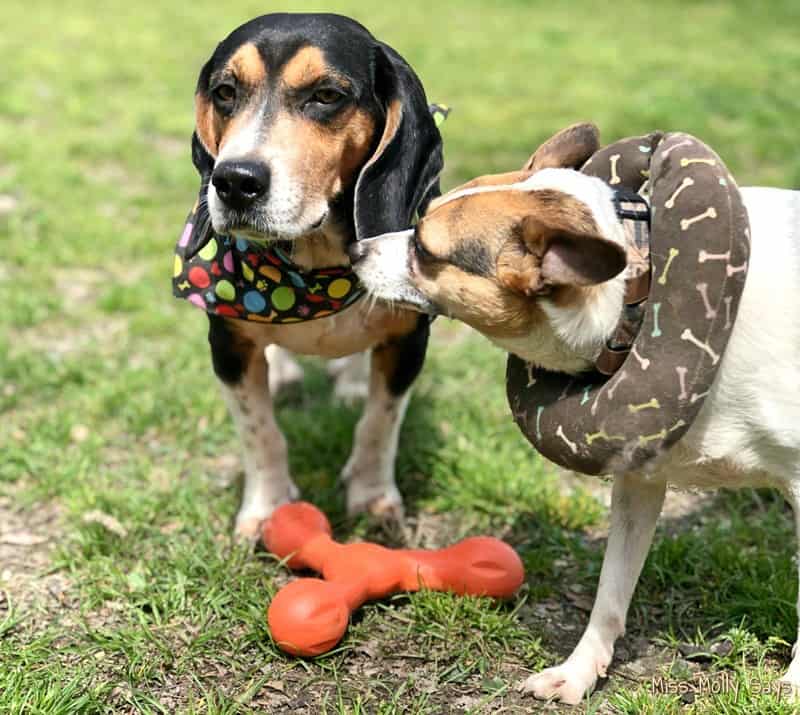 Speaking of little dogs, Rocky and Poco are getting the game rules down before starting their next round of tug-of-war. Poco is sporting a puppy bumper because he has a habit of trying to see the world outside the fence 🙂 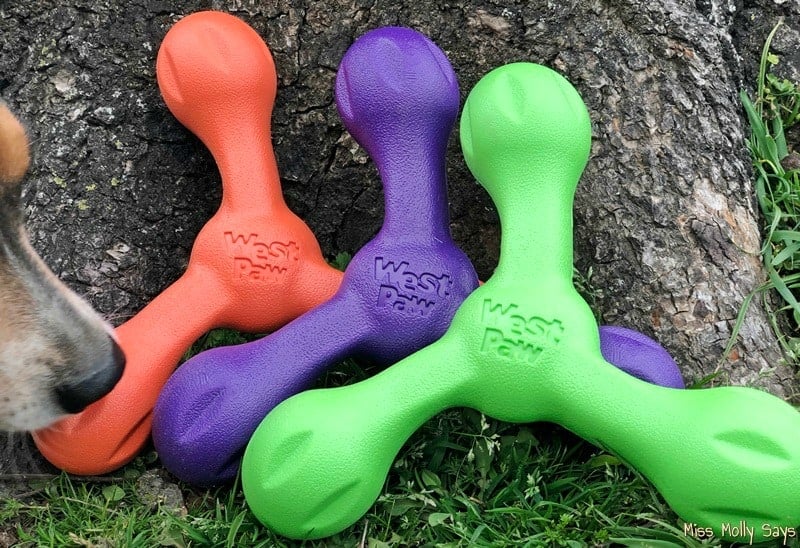 As you can see, the pups are loving their new Skamp toys! They chew, fetch, and tug their way through play time. I love seeing them running, playing, and getting rid of all that pent up energy. I also love the Zogoflex Echo Skamp dog toy for them to chew on. Dogs love to chew and the Skamp is much safer than chewing on sticks which can get stuck in their mouths and hard items that can break their teeth. All in all, it’s a paws up from Miss Molly and the pack!

Visit West Paw to learn more and get your 4-legged friend a Zogoflex Echo Skamp dog toy! West Paw is our favorite place to shop for dog toys and supplies so be sure and take a look around. They offer a variety of dog toys, collars, leashes, and dog beds. You can also find the fun Skamp dog toy at pet specialty stores across the US.

These look pretty awesome! for the dogs to play with. @tisonlyme143

This looks like it will be great for my sons lab Drake. He really chews up all of his toys.

I think that my dog will love this! And several other dog that I know would love this as well!

I have never heard of these before today. Looks like a fun toy for the pups!