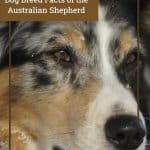 The Australian Shepherd is a delightful companion. They are easy-going and intelligent dog and make a great family pet. They are extremely intelligent and easy to train.

Aussies will be best with an active family as they are extremely active dogs that need a lot of exercise.

If you are considering getting an Australian Shepherd, take a look at these facts about this amazing breed.

Origin of the Australian Shepherd Dog

Despite their name, the breed was actually developed in the American West during the late 1800’s or early 1900’s from sheepdogs that originated the Basque Region between Spain and France.

They were later exported to Australia on the way to the U.S..

If you are thinking about getting an Aussie, you should know they are active dogs. In other words, do not get an Aussie if you’re a couch potato! This dog needs LOTS of exercise! If they do not get enough exercise, they can become destructive.

Australian Shepherd dogs are very affectionate with their families. However, while most Aussies love kids, they sometimes play rough and may not be suitable for families with small children.

Aussies also make excellent watchdogs but are not vicious. While not overly friendly with strangers, Aussies readily accept pets and attention from new acquaintances.

While Aussies were originally bred for herding, they are content to run in dog parks, play fetch, and are a great dog for agility courses.

Aussies are intelligent and need activities to keep them interested. Put that intelligence to work in training!

They are easy to train as they love to learn. Aussies are extremely intuitive and will quickly figure out what behavior elicits pets and treats and will act accordingly.

They are adaptable and, if socialized, you can take them anywhere dogs are allowed, for example, hotels, beaches, and outdoor restaurants.

In addition, most Australian Shepherds can readily be trained as therapy or service dogs.

Physical Attributes of an Aussie

Physically, Aussies are between 40 and 65 pounds, making them a medium-size dog.

They generally are about 20 inches at the withers, with the males being somewhat bigger than the females. There are also miniature and toy Aussies now available.

Aussies are generally healthy dogs, but like all pets, they need regular vet checks. Australian Shepherds are also one of the breeds prone to hip dysplasia.

Aussies come in many colors:

Their usually soft, medium length, coats vary in waviness and can have long outer hairs with a dense undercoat. Occasional brushing will minimize the amount of fur that goes flying around your house.

Aussies shed year-round but shedding is heaviest in the Spring when losing their winter coat. You should brush your Aussie weekly and more often during their heavy shedding season.

The eye color of Australian Shepherds can vary. Some Aussies have one blue eye and one brown. Alternatively, they can have two blue eyes or two brown eyes.

Is an Australian Shepherd Right for You?

If you have an active lifestyle and can spend a lot of time with your dog, an Australian Shepherd may be the right dog for you.

Make sure you purchase your dog from a reputable breeder, or better yet, check with your local animal shelter or breed rescue group to find one of these remarkable dogs.

Which of the Aussie coat colors is your favorite?

Thanks for the interesting article.

These are some pretty dogs thanks for the info