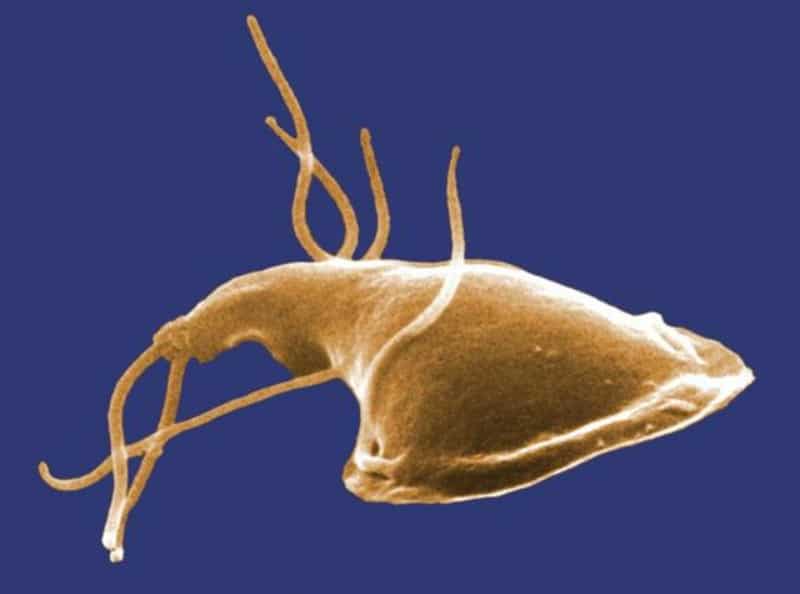 Giardia is a microscopic, protozoan parasite that aims to make its home in the GI tract of animals including most mammals, rodents, birds and humans; resulting in a disease called giardiasis (also known as beaver fever).

It attaches itself to the inner wall of the large intestines or can be seen floating freely within the mucus lining.

Giardia is often overlooked by pet owners and vets as it’s not an overly common infection and sometimes goes unnoticed without showing any symptoms at all.

However, when symptoms do present, it can play havoc with a dog’s digestive system and is often mistaken for bacterial, viral, and infections of other parasitic organisms due to the similarity in symptoms.

How Do Dogs Contract Giardia?

Like many parasites, giardia has a specific life cycle that relies on the infection of a host to be successful.

Their tiny eggs can’t be seen without a microscope and lie in the environment waiting for a host animal to unintentionally ingest them.

Once they enter the digestive tract they consume nutrients meant for the host and grow into adult forms which lay more eggs that pass through the feces into the environment continuing the cycle.

Animals that are infected will leave droppings or pass away in your yard or in parks where you take your dog to get some exercise and fresh air.

Your doggie pal can then become infected by accidentally consuming the eggs as they go about their business sniffing around and playing. It’s not something that’s easy to prevent. 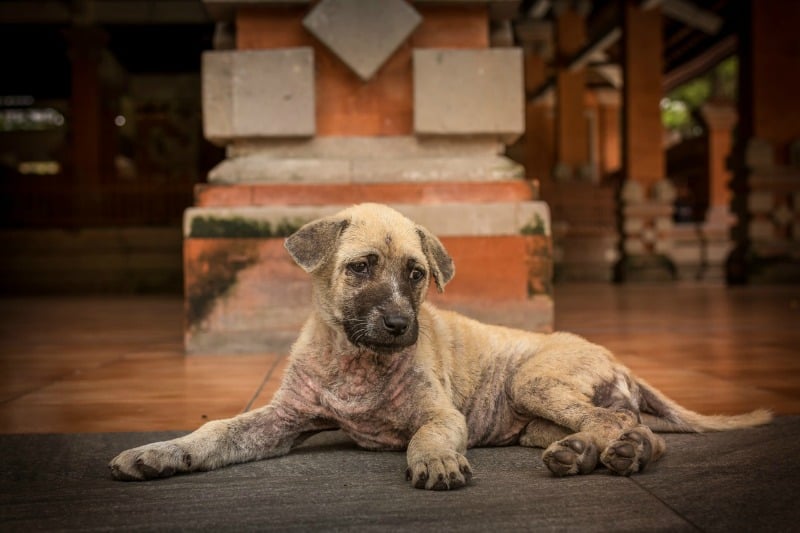 The unpleasant effects of giardiasis in a canine can be clearly seen if they are not asymptomatic.

Giardia is not actively damaging or destroying tissues but the parasites interfere with normal bodily functions; they literally get in the way of the digestive process resulting in the following symptoms:

Diarrhea – Diarrhea in dogs is the most common symptom shown in giardiasis and can range from mild to severe.

It’s caused by partially digested foods reaching the lower intestines due to proper absorption being blocked by the high number of giardia in the intestinal lining.

Vomiting – For similar reasons to diarrhea, food digestion is being blocked and this causes the poor pup regurgitate partially digested or even undigested food.

Weight Loss – The lack of nutrition and proper food absorption will quickly result in weight loss.

This is when the infection becomes quite worrying for owners as the dog is not getting the nutrition it needs for a healthy life.

Lethargy – Your dog may seem to be disinterested in the things they love and suffer from lethargy and depression.

They may not be bothered to get up and move, play or show affection like they do when they are well.

Loss of Appetite – The loss of appetite is an extension of lethargy and a contributor to weight.

You’ll notice your dog will take a disinterest in eating their meals and only eat when they are urgently hungry.

Due to the vomiting and diarrhea, they may not be getting much nutritional value out of it though.

Digestive Discomforts – Stomach cramping can occur which is highly uncomfortable for your pet as well as excess gas, bloating, and burping.

If you suspect any kind of infection in your pet be sure to take them to your vet to take a look at the physiological symptoms as well as samples of their blood and stool.

Taking a microscopic analysis of a stool sample is the only way to diagnose a giardia infection accurately.

Be aware; infections are the majority of the time just an infection but sometimes underlying health issues can be the root cause.

For example, diseases that result in immune suppression such as those which involve the adrenal or pituitary glands could be a hidden illness, so be sure to take your pet’s health vigilantly if they are ever ill.

Treatment of giardiasis is sometimes not necessary at all and the illness resolves on its own if your dog’s immune system is up to the job.

Otherwise, drugs such as metronidazole, tinidazole, ornidazole, and secnidazole are usually effective treatments but either way, always follow the advice of your vet and avoid acting on your own diagnosis just to be sure your companion gets the treatment they need.

Guest post by Carl Mclean: Carl is a dog owner, wildlife enthusiast and blogger who’s other works can be found on Animal Mentor.

Sounds like lots of discomfort.. can giardia affect cats too