I’ve been a bit of trouble here lately. Lately I’ve been keepin’ my sister Sallie out of the food bowl. My Lady is a bit upset at me. We use to have a food bowl that never ran dry. I got us all in trouble by startin’ a fight the other night and jumpin’ on Sallie. So, now we gotta eat at certain times with all of us separated. We’ve talked a bit about food aggression in dogs before, but I wanted to say a little more seein’ as I have a first hand understandn’ goin’ on now! WOOF! Before we talk about it, I gotta let it be known that I DON’T growl at my Lady. She can take the food right outta my mouth. I just didn’t feel like lettin’ Sallie eat none. There’s a difference. Why don’t ya sit a spell and let’s talk about the problems with chow time for us dogs or in other words – food aggression in dogs! Lemme fetch my Lady to s’plain it all to ya! 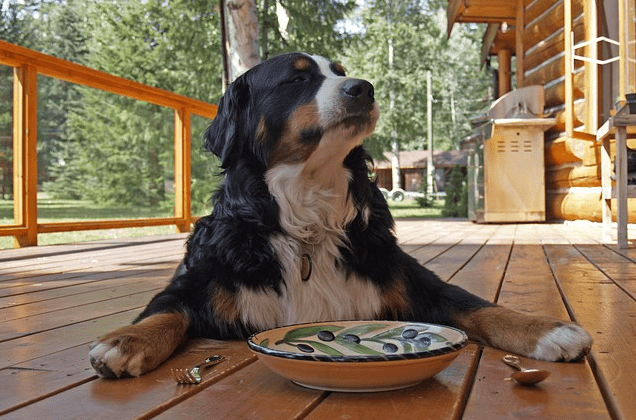 Experts say that out of all dog behavior problems, food aggression in dogs is one of the most serious. It can become violent and ugly. Unfortunately, a lot of folks ignore food aggression in their dogs because they don’t understand it. They just avoid dealing with it.

You might think it doesn’t make sense for your dog to become possessive of his food, bare his teeth and growl at you, especially when you’re the one whose feeding him in the first place. However, this kind of thinking can cause complete chaos in your home. When food aggression is involved, what’s actually happening is your dog is stating his ownership of the food, as well as the home you share! This happens because you’re not making it known that you’re the alpha leader in the home.

If you have a small dog it may seem all cute and funny when your dog is possessive about his food. You may not be scared of him, but you should think about what could happen if your dog acts like this toward a friend, kids, or a baby.

Your dog could begin to show aggressive tendencies, including food aggression, for lots of different reasons. It’s important to work on stopping the aggression and nip it in the bud!

Here are a few suggestions to stop food aggression in dogs:

When your dog shows food aggression you have to know when to react to it and when to step away. If you give in to your dog when he shows aggression and don’t deal with it right, then you’re telling your dog that it’s all right to go on snarling and snapping.

If your dog is acting aggressive toward another dog at feeding time, it’s fairly easy to handle. All you need to do is separate them when they eat by putting them in their crates or a different room.

Get All Household Members on Board with the Plan

You must get all household members involved, so they know what’s happening. Everyone in the family needs to take the SAME actions toward your dog to correct him when he shows aggression. If you don’t, your dog will get mixed signals and keep on being aggressive. It can’t be just you working with him.

You need to be the alpha and control the food bowl. This means that you need to be in charge when you feed your dog. Be a little more forceful and in control. Teach your dog to sit and stay before you give them their food. Doing this teaches them they have to earn the food and that you are in charge of that food.

Your dog should also pay attention to you when you are feeding them and not just focus on the food bowl. Your dog has to understand the food comes from you. The point here is – you control the food, not the dog!

Feed your dog after you eat. This shows your dog that you eat first and you have the position of alpha leader!

You should never give your dog a reward for growling. If your dog growls, don’t give him the food bowl! Don’t yell or punish, just withhold the reward of the food. If you show aggression, such as yelling or punishing, in response to your dog’s aggression, the situation can escalate and become dangerous.

You can stop your dog’s aggressive behavior by hand feeding him and by showing your dog special attention while you are feeding. This is particularly effective when you’re trying to calm a dog during meal times. Hand feeding your dog and showing him special attention while you’re feeding him will also get him used to you being near him while he’s eating. This is even easier to do if you have a puppy. You should practice this from the first time you feed a puppy.

Dealing with dog to dog aggression over the food bowl is fairly easy by separating them. But, if your dog shows aggression toward you, the kids, neighbors, or whoever when he’s near the food bowl – we strongly suggest that you find the best trainer possible to help you deal with the problem. Food aggression in dogs is nothing to play around with! Someone could get seriously hurt!