Food aggression in dogs is a common behavior. Dogs become aggressive towards other dogs, or even human folk, when they’re eatin’ or around food.  It’s a very dangerous behavior, which must be nipped in the bud – so to speak! If ya don’t, they may end up bitin’ someone really bad.  It’s important to note that this is not the same as general aggression where dogs bite or attack for no clear reason. Food aggression is a natural instinct, so it may be more difficult to fix. 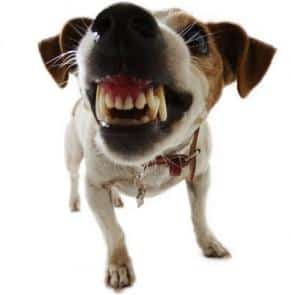 It is best to start trainin’ your dog not to be aggressive with food as early as possible.  If you start givin’ a puppy food and then takin’ it away frequently while they are still young pups, most dogs will never develop this type of aggression.  If ya have a puppy, it’s important to not only give and take food, but also pet and touch the dog while it’s eatin’.  If it’s possible, have multiple people do this, includin’ kids, so your dog grows up understandin’ that he can be touched while he is eatin’.

If your dog is already showin’ signs of food aggression it is very important to do somethin’ as quick as possible to put an end to it.  To avoid gettin’ hurt with large dogs it might be necessary to find a professional to help ya through this process.  WARNING! Dogs that are aggressive around food can, and will, bite! If your dog is not too big, or you’re not worried about your dog actually bitin’, you can follow these tips to put an end to the food aggression yourself.

1) When first startin’ out it is best to use food that your dog likes, but does not love.  Their regular dry dog food is good to start off with.

Modify your behavior first! Most dogs know the signs that they are gonna get fed and will start gettin’ excited.  Don’t let your dog come close to ya while you’re preparin’ his food.  Keep your dog sittin’ or lyin’ down at least a few feet away from ya. Don’t let em get excited.  For a lotta dogs, this will take quite a bit of doin’ the first few tries, but it’s very important.

2) Once your dog is calm, and you have his food in his dish, you can approach your dog with the food.

This is very important part, since you are showin’ your dog that the food is yours and you will bring it to him, and he should not come to get it from you.  Throughout this step your dog should stay calm and submissive.  If your dog is calm, then set the food down and let him begin eatin’.  After the first couple bites, step close to your dog.  This step should be done confidently and do not show any fear to the dog.

3) By stepping into his eating area you may trigger some growlin’ or barkin’, do not step back.

If you are able to safely discipline the dog for barkin’ and growlin’ you can do that now, but don’t risk gettin’ bitten.  If your dog feels you’re gonna take his food he will stop eatin’ to protect it.  Let him growl and bark until he gets tired of it, this can take anywhere from a few seconds to ten or more minutes.  When he starts to relax, he will either submit (this is what you want) or he will try to start eatin’ again.

4) If he starts eatin’ again, take another step toward him.

Repeat the above process until your dog submits to you, or you’re standin’ between your dog and the food.  What you are doin’ here is claimin’ the food as your own.  Your dog should not see the food as his, but rather as your food which your allowin’ him to eat.  This will also help establish you as the leader of his pack which will help in other trainin’ areas as well!

5) Once your dog has submitted, by either layin’ down and bein’ calm or tryin’ to walk away you can pick up the food.

At this point ,you start the process over. Only allow him to finish eatin’ if he is calm and allows you to be near him while he eats.  This process should be followed EVERY time you feed your dog, until you are confident he is no longer food aggressive, then just do it a few times per week to ensure he does not go back to it.

6) When you are comfortable with his behavior with dry food, it is time to move on to somethin’ he wants more such as a bone or some meat.

This will kick in those natural instincts in a much stronger way!  Simply repeat the process above until your dog shows no aggression no matter what type of food he has.

The whole process can take weeks, or even months, to get through for some dogs. But, it’s very important to stop this behavior.  A dog who is bein’ aggressive with his food can be extremely dangerous and should not be tolerated.  With commitment and some patience, any owner can train any dog to be calm and submissive while he is eatin’.

We’ve had some issues ’round here, but got them solved. The stray dogs had to learn. Heck, even a few of us had some issues. It seems to be worse when the pups have been without food,or didn’t get enough to eat, where they come from. They get some food and they want it all for themselves cause they’re afraid there might not be anymore!

Just love em and be patient and consistent with the trainin’. They will catch on 🙂

Our old dog got like that at the end. We ended up having to shut him in the bathroom when he ate. Nothing we did worked and he kept going after our other pup. But he was old and sick (sixteen and a half).