Since the weather has warmed up outside, we’ve been spendin’ lots more time playin’ out there. My Lady says in order for us to stay healthy, we have to have lots of good exercise. She’s also goes on a lot about our food and some things called supplements she gives us. She said a funny thing the other day and I’m still a thinkin’ on that one. She said that good health starts in the gut. Say what? I know when my belly is full, I feel mighty fine or more like takin’ a long nap WOOF! Have y’all ever heard of somethin’ called probiotics? Or canine probiotic supplements? 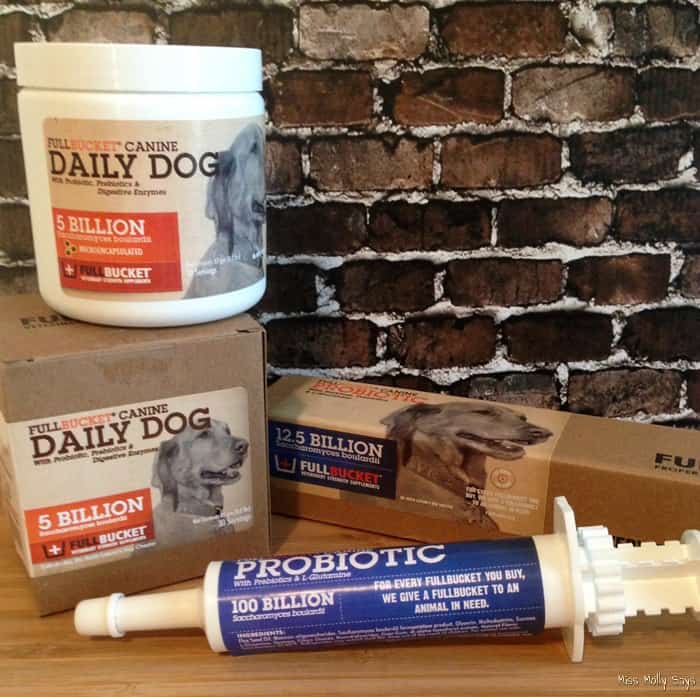 My Lady also says that along with good food and exercise, all dogs need a quality probiotic to help their insides especially if they have digestive issues. She says they help our health from the inside out! I know some of us here have some belly problems goin’ on. My little sister Little Bit use to upchuck all the time. Every mornin’ my Lady was a having to clean it up and wash her bed. Then, there’s my big brothers, Ozzy and Seager. They have some major stinky gas problems going on that will run everyone out the room! Ain’t no nice way to say it! They had some farts that would make my Lady be lookin’ to see if one of em had an accident in the house!

That’s when my Lady said somethin’ had to give. I didn’t know if that meant she was gonna plug em up or what WOOF! Lucky for them, that’s where a canine probiotic supplement can help get their innardz back in a better workin’ order! I saw her spendin’ a lot of time lookin’ and readin’ on how they can help first – y’all know how she is! Everything has to get her approval ‘fore we can have it WOOF! Anyway, I’m just a spittin’ in the wind cause I don’t know what this stuff does. All I know is I can risk nappin’ in the same room now without fear of bein’ gassed to death in my sleep and Little Bit is actin’ livelier these days since she ain’t upchuckin’ all the time! Since my Lady has been tellin’ anyone that would listen about this stuff, I’m sure she will want to tell ya all about it too!

Probiotics are good for humans and animals aren’t any different. Actually, their digestive systems are a lot like our own. They process their food in their stomach just like we do. Their nutrients and water are later absorbed into their system as it moves through the intestines, which brings you to their ‘gut’. Here is where their food is absorbed. Sometimes things can get a bit off track, again just like with us humans. They can have diarrhea, vomiting and constipation from these upsets. Probiotics can help keep the digestive system working right. Probiotics help them absorb nutrients properly and help their overall health by optimizing their digestive system. Your dog can get more nutrients out of their food and keep a strong immune system.

My big furbabies have a tendency to eat a lot of things they shouldn’t. During a day of playing outside, it is not unusual to see them eat grass, dirt, sticks – anything they can find. This can cause some stomach upsets.

Molly wasn’t exaggerating about Ozzy and Seager when she said they were on the gassy side. We aren’t talking about a toot every now and then. It was an every night ordeal of a smell that would make you hold your breath! Them two boys could clear a room in a matter of minutes! Heck, they would even leave the room! They were two of the reasons I was on the hunt for a canine probiotics supplement. And then, there is Little Bit. That poor little pup would throw up every single night without fail! I know she was suffering and for that matter, I was too! It became a habit to get up, clean up the throwup and wash her bedding. We had taken her to the vet and nothing could be found wrong with her and nothing we had tried (food changes, smaller more frequent meals, assortment of medications) had worked in helping her. Then, I heard about Fullbucket Canine Probiotic Supplement. They have a Daily Dog Powder and a Canine Probiotic Paste. 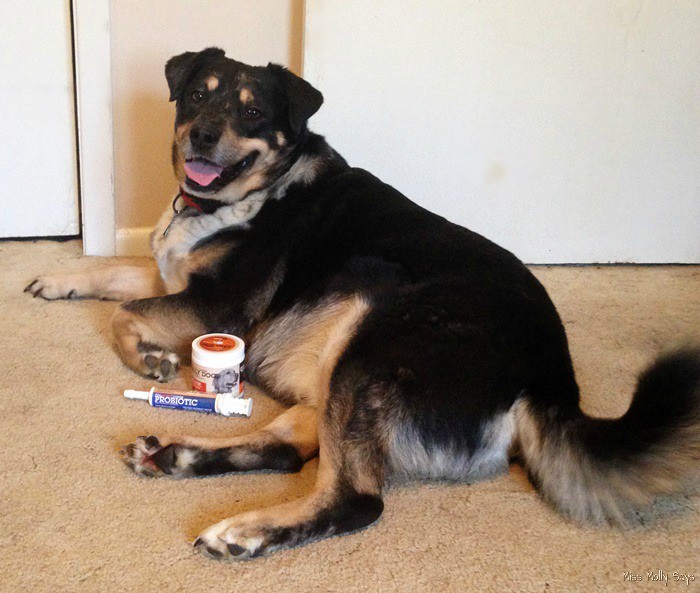 I first tried the Canine Probiotic Daily Dog Powder Supplement. It has the highest concentration of probiotic to help fight pathogens, along with prebiotics to feed the native microflora and complete enzymes to improve digestion. It is simple to use. I just sprinkle a small scoop on their food each night. After about a week, I noticed that Seager was pooping much more regularly. Before the probiotic, it was hit and miss. Sometimes he would go more than once on a walk and others he wouldn’t go at all. Any attempt to regulate him only ended up in bouts of diarrhea. However, while being on the canine probiotic supplement he begin to poop on a regular schedule – actually morning and night. In turn, his gas issues disappeared and I also noticed his stomach didn’t seem bloated and tight. Seager feels better these days and has gotten a lot less crabby with the pups. I am assuming being bloated, gassy and not able to poop made him cranky – much like it does us too!

Ozzy showed improvement, but was still having issues. The same went for Little Bit. She was making it a few days without throwing up, then there she would go again. I was willing to settle for that as it was improvement. But, I talked with the folks at Fullbucket and they recommended trying the Canine Digestive Care Probiotic Paste, which adds a bigger boost. 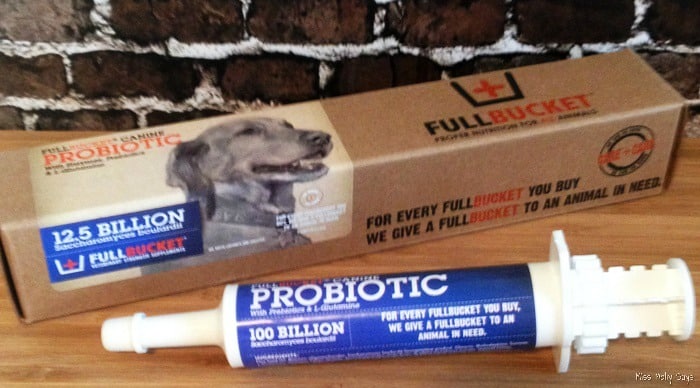 Canine Digestive Care Probiotic Paste is used for daily digestive health and it is great for getting diarrhea or loose stools under control. Some dogs are like us humans in that when we take an antibiotic, it can cause diarrhea. Other dogs can have digestive issues from stress factors such as training, travel or new surroundings. I was excited to see if the Canine Digestive Care Probiotic Paste would help out further with Ozzy’s gas and Little Bit’s throwing up. 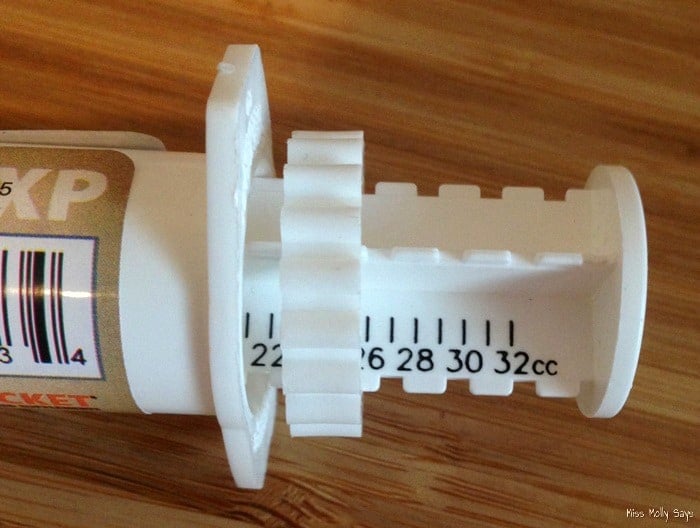 The Fullbucket Probiotic Paste is just as easy to give as the powder. It comes in a syringe type tube with a dial. Just dial it up to the appropriate amount for the weight of the dog. The pups will readily lick it off of my finger and I have also just added it on top of their food. 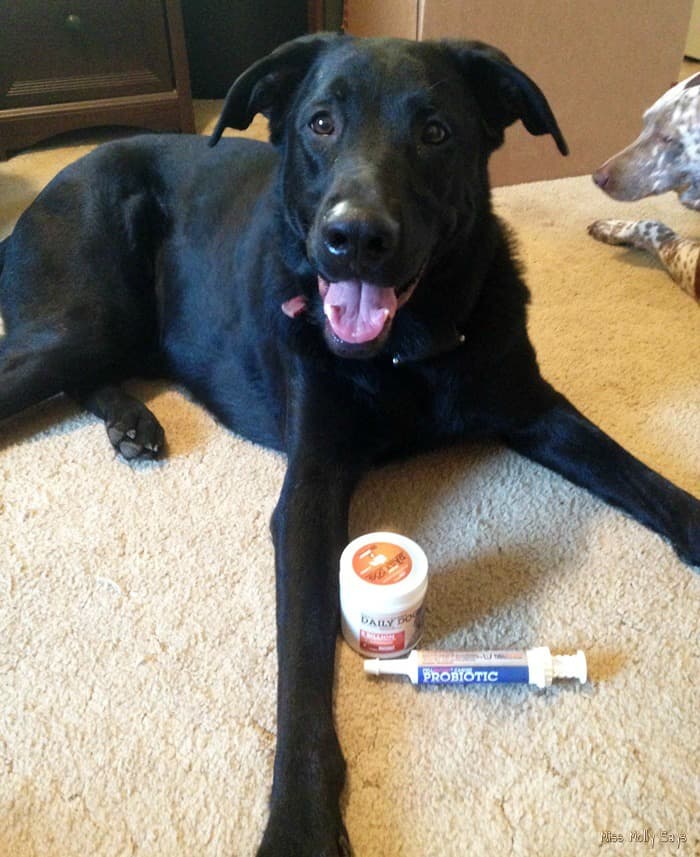 Ozzy’s story: GAS! – as in everyone leave the room NOW gas!

Since Seager was doing good on just the daily dog powder, I left him at that. On the other hand, my big Ozzy needed a boost. Ozzy doesn’t have any issues going to the bathroom but he is just so big! He has passed the 130 lb mark now and seems to need more of everything. The probiotic paste did the trick! Woo Hoo! That little extra kick from the probiotic paste worked! Yep! I’m dancing around the room with my hands in the air, while they think I’ve gone crazy! You can actually stay in the room with the big boy now without fear of your eyes and nose burning! Just look at that smile! You can tell he feels good! And, it sure makes snuggling with my big lovable goof ball a WHOLE lot better!

The ultimate test of the probiotic paste still rested with Little Bit. Even though her throwing up was better, it was still happening a couple nights a week. I switched her from the daily dog powder to the canine probiotic paste. After a few days I saw more improvement! We had long suspected her throwing up was coming from stress. If you remember, she came to us as an abandoned furbaby. She was very skittish and we think had been abused. Even after almost a year, she is still skittish, jumpy and camera shy please excuse the blurriness! She knows she is safe with us, but in a household full of giant dogs, lots of barking and activity – I think she gets nervous. Again, just like humans that are stressed and get an upset stomach, we believe this could be the root of her problem.

Now a few weeks later after starting the Canine Probiotic Paste, I am now happy to report she is throw up free for the most part! She no longer throws up every night and it is so nice to wake up to NO mess. I know she has to feel better too! I’m sure in time she will mellow out, but for now, to have her tummy feeling better is enough.

How do you know which to use – Daily Dog Powder or Canine Probiotic Paste?

The Daily Dog Powder is where I started. It can help with digestive issues, improve digestion and help them keep a strong immune system. It’s a great maintenance canine probiotic. Most pets will do fine on the powder unless they are having other issues.

The Canine Probiotic Paste can be use daily also. The paste is the way to go if they are having diarrhea, loose stools, vomiting, etc. Also, if they are on antibiotics, I would choose the paste because it gives a quicker boost to the digestive systems bacteria. We all know that antibiotics can cause chaos with the bacteria in your system.

Both the Daily Dog Powder and the Canine Probiotic Paste are easy to give. You can apply both to their food or let your pup lick the paste from your finger. I believe that canine probiotics, along with joint supplements should be something all pet parents should be doing for their best friends. Oh, and I need to mention, they have a probiotic paste especially for puppies!

Did I mention I LOVE this stuff! It has made a life changing difference in 3 of my furbabies from getting Seager regular in pooping and getting rid of his bloat and gas, to Ozzy’s serious road-kill smelling gas and finally Little Bit’s frequent vomiting.

Is the probiotic supplement good for cats?

Fullbucket Daily Cat is in production and should hopefully be available for sale in the next few months.  In the meantime, Feline friends will love the Daily Dog Powder – just call it “Daily Powder” around them 🙂  Cats should have 1/2 a scoop once or twice daily, sprinkled on their food.

I LOVE that Fullbucket gives back ONE-FOR-ONE!

FOR EVERY FULLBUCKET YOU BUY, FULLBUCKET GIVES ONE TO AN ANIMAL IN NEED! How’s that for giving back?! FullBucket is the first animal healthcare business to deliver a one-for-one philanthropy program. Their number one mission is to give a nutritional supplement product to an animal in need for every product sold. They customize the product for the specific needs of the animals that are receiving them, then hand deliver the product to the people in need.

For more information, connect with Fullbucket on Facebook and Twitter! Be sure and go by and order your Canine Probiotics and get your pet started on a better road to health today!

We take a probiotic and was wondering it would help our little guy. Thank you for your information. I see now this would be a good thing for our dog.

Thanks for the Canine Probiotic Paste. Sadie ate it up and elp well with stomach upset and gassieness. Thanks again

Our dog has alot of gas. It sounds like this great product may just help. Thank you so much for sharing

This is GREAT news!! My dog, who is very old, has these issues periodically. I HATE seeing him suffer!! My cat is fine. 30% off until June 30th good to know!