I have a couple of sisters and a brother that are really scared of thunderstorms. I mean really really scared of em! They pace, pant and cling onto my Lady’s legs. My sister Maggie will even try and hide in the closets. I’m not sure what all the fuss is about. It’s just a little noise ain’t it? But for whatever reason, their fears are real and my Lady has been searchin’ for a way to help em. She had been hearin’ about the TunderShirt and wanted to try it and see if it helped. 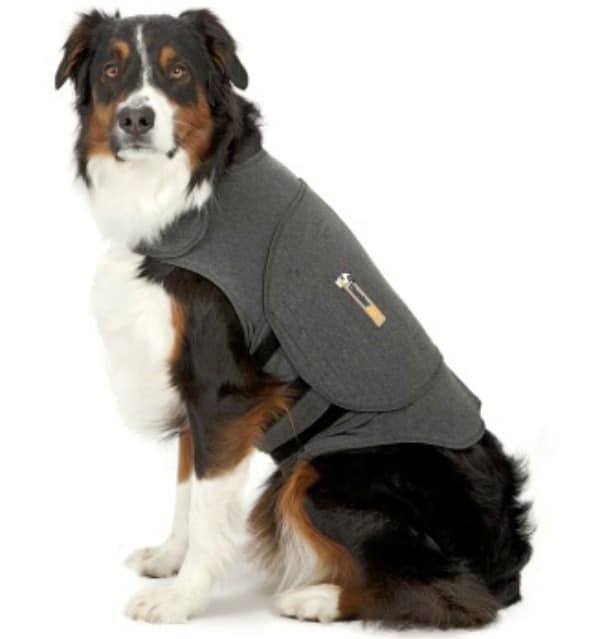 Here’s what my Lady had to say about the ThunderShirt:

Molly isn’t exaggerating about her brother and sisters. Three of the seven furbabies are scared to death during storms. Actually, it doesn’t even have to be storming. A little bit of rain and the pacing begins. They stick to me like glue and I can barely walk for them. For them, it’s very uncomfortable and an anxious time. I feel really bad for them, but know I shouldn’t fuss over them too much or I will reinforce their fears. That’s when I started looking into the ThunderShirt. I really wanted to know if the ThunderShirt would work! For the life of me, I couldn’t understand how something so simple could take away their fears. But for me and the furbabies, it would be worth its weight in gold if it would calm their fears. When I received a chance to try a ThunderShirt, you can bet I said an excited yes!! Haven’t heard of ThunderShirt?

As the name ThunderShirt implies, thunder and noises was the first fear we tackled, but along the way, we found that simple pressure helped with a multitude of pet anxieties including separation, travel, vet visits and much more. Our proprietary research also uncovered that over 30% of pets suffer from one or more of these anxieties making anxiety one of the leading issues for today’s pet parents.

Maggie is our girl with the most severe thunderstorm anxiety. She will pant, pace, jump in the bathtub and even try to get in the closets. It’s really heartbreaking to see how scared and worked up she gets! I have even considered medication for her storm anxiety. Her anxiety really gets that bad! 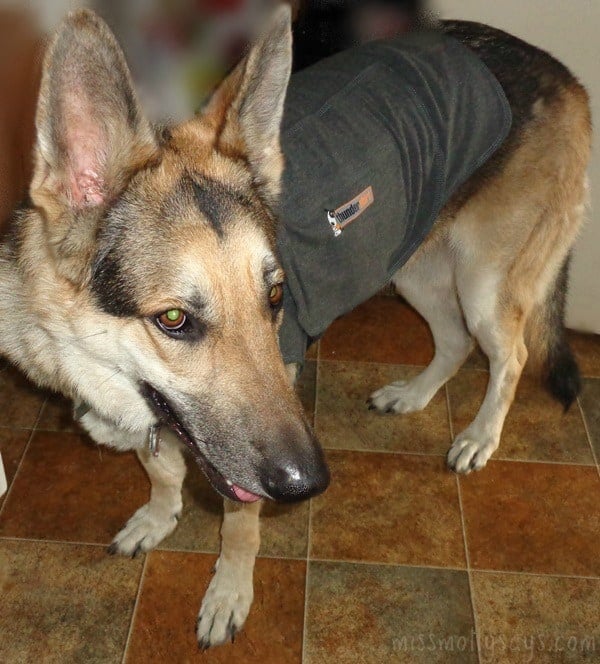 After receiving the ThunderShirt and the next storm that rolled around, I put the ThunderShirt on her. She accepted it right off the bat! I was surprised as I had been a little worried that she may not like it. Being a large German Shepherd she doesn’t normally wear doggie clothes and I didn’t know how she would react to it.

During this first time of wearing the ThunderShirt, she did continue to pant heavily. But, the pacing stopped! Even though she still seemed on full alert, she lay quietly at my feet. It was the second storm that I saw an even bigger difference in her behavior. When the storm rolled in and I heard that first clap of thunder, I pulled the ThunderShirt out and placed it on her. With the first storm, it was already storming fairly hard and she was pretty worked up before I put it on her. With the second storm, I put it on her as soon as the storm hit. I really believe that played a part in how well it worked. It was much easier to nip it in the bud than wait until she was in full-blown anxiety. 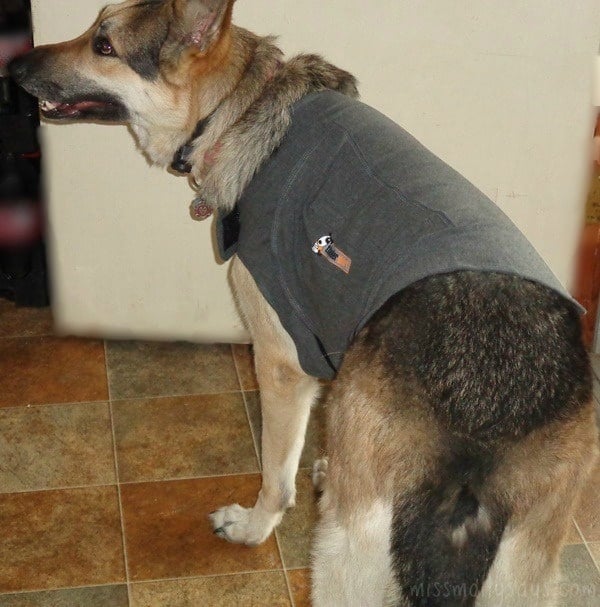 We made it through the storm with no panting, no pacing, no nothing. She even ventured out onto the porch with me to look at the sky with her ThunderShirt on. Never before would she come out of the house with it thundering and lightning! I believe the ThunderShirt is really going to help give her the comfort she needs. It was actually pretty impressive to witness how such a simple thing could cause such a transformation!

Since the ThunderShirt is for anxiety related problems, I decided to give it a try for Maggie’s “company issue”. I’m not sure why but Maggie has always been a very skittish girl. She came to us at only 6 weeks old, but even then she would run and hide in her crate. I’m not sure what happened to her to make her so skittish of people, but we accept it. Once she warms up to you, she is fine. But, when anyone visits, she acts the same as if there were tornadoes bearing down on us. Since the ThunderShirt seemed to calm her during the storms, I gave it a shot with the company issue. While it’s not working perfectly yet, I will venture to say – it’s better! She will at least come out and sit in the same room with the company. Before, she would hide under the bed until they left.

ThunderShirt works for many types of anxiety!

All you have to do is put the ThunderShirt on your dog and let it do it’s magic! For some dogs, you may see results with the very first use. But, some dogs may require two to three usages to see results. Don’t give up on it!!! For Maggie, it seems to get better each time it’s used.

I am more than pleased with the results of the ThunderShirt for Maggie! Now, I am wanting to try it for the other two pups that have storm anxiety! I’ve also got plans to try it with Sallie and her vet anxiety! For those that follow the blog, you know when Sallie has to see the vet it usually means we have to medicate her to get her there. To have something that doesn’t require drugs and gives them that much comfort is well worth it in my opinion! And, as you can see, I have big plans for more of these ThunderShirts!

I believe the ThunderShirt works exactly as it says. After saying that, I will also say that it may take several times of use to see a change in behavior. The improvement may not come on the very first time of use, but you can’t give up. For Maggie, while she is still anxious, her behavior gets better with each use. Also, it may not work for every pet just as some things work for some people and not others. In my opinion, and if it will help avoid medicating your pet, it is well worth a shot to give it a try! I also love that is works for other anxieties besides storms. Basically, any situation that produces anxiety for your pet can potentially be helped by this simple ThunderShirt! After witnessing what it has done for Maggie, ThunderShirt has my full recommendation!

The ThunderShirt is available in sizes from XXS up to XXL and in a variety of colors. They also have ThunderSweaters and ThunderCoats that fit over the shirt. You can ease their anxiety and keep them warm at the same time!

Visit ThunderShirt for more information and to browse all their products. You can also stay up to date by fanning them on Facebook and following them on Twitter!