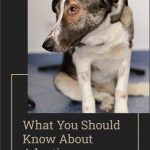 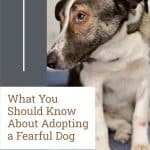 Adopting a new dog is an exciting experience, whether this is your first time doing it, or you’re a frequent rescuer! But, as you may know, shelter dogs can sometimes come from less-than-ideal situations. Let’s talk about a few things you should know about adopting a fearful dog.

The tragedy is that most of the time, they end up in a shelter through no fault of their own.

All dogs just want to be loved. But, because of what they may have been through, they might be scared, or even a little anxious.

That shouldn’t stop you from adopting them, as long as you’re willing to put in a bit of extra work.

With some time and effort, even a dog that has been through a lot and seems anxious can become the cuddliest, friendliest, and most loyal pet you’ve ever had.

So, what should you know about adopting a dog who seems fearful?

They May Want Their Own Space

It’s important to have the right environment for a fearful or anxious dog. If you have a noisy, chaotic household with children or other pets, getting a scared animal might not be the best option.

Even if you do have a quiet house, you might need to make a few adjustments for a while.

Your main goal, at least at first, should be to make your dog feel safe and calm.

Chances are, they are going to want their own personal space for a while until they recognize that they’re in a safe home.

So, instead of giving them attention (as tempting as it is!) right away, try to “ignore” them for the first few days they’re in your home.

Feed them and let them out or walk them, of course, but don’t overwhelm them with affection or attention.

Instead, let them come to you. Give them their own space with a crate, and a calming dog bed so they know they have a place to retreat if fears start to creep in.

They Have a Reason to Be Scared

Most fearful dogs are scared for a reason.

Maybe they were abused or neglected by a previous owner. Maybe they came from a puppy mill or a harmful breeding program.

Or, maybe they were just never socialized with other people or animals.

It can be frustrating and overwhelming when you’re trying to help a fearful dog because you don’t know exactly what’s going on in its head.

But, what you should keep in mind is that they aren’t scared for no reason.

They don’t want to feel this way. It’s been ingrained in them at some point, due to some situation.

Try to sympathize with them, even though you can’t communicate directly, and be patient.

They Want to Learn

Training a fearful dog takes time, but that doesn’t mean you shouldn’t do it.

While “tough love” won’t be the best approach, finding a gentle and reassuring training program for your dog can actually help them to improve and to lessen their fears quickly.

When your dog learns something new and you reward them for it, they are learning how good behavior benefits them.

Not only will they enjoy the immediate gratification of a treat or attention, but it will build their confidence over time.

As a result, their fear will start to waver and eventually weaken, while their confidence continues to grow.

Try to train your dog in a way that seems appealing to them.

Make it as playful as possible, and try to avoid making it overly stressful on either one of you.

You Will Face Challenges

Dogs can be prone to anxiety and fear for a variety of reasons.

Again, you don’t know what happened to your dog before you adopted them.

You might be able to get a general story from your local shelter, but only that four-legged friend knows exactly what they’ve been through.

So, you will face hurdles and challenges as you go. The dog will test your patience.

But, if you’re willing to be patient and work on the dog’s terms when it comes to letting them set the pace, you will be rewarded.

In fact, adopting a scared or anxious dog is one of the most rewarding things you can do.

People tend to overlook those dogs because they take a bit of work.

But, if you’re willing to put in the time and effort, you’ll have a loyal and dedicated friend for life, forever grateful that you saved them.

I totally agree that if you adopt a pet, you should stick by them through thick and thin! They are not a product that you can return and bring back! That’s no good for their fears. They want to be loved and to belong in a loving environment. Just like you would treat a child with kid gloves so a fur baby shower be treated the same way!! We adopted a couple of our pets from PAWS 🐾. We didn’t care about there backgrounds. We received awesome vibes from them. They were a part of our family until they crossed the rainbow bridge! I shared on Social Media! This is very important information!! Thank you for sharing!

Wonderful information. Dogs are such amazing pets if you have a little patience.

Just reading this gives me chills, I know so many dogs that need a good home and I can see in some who have that look to them, its just they have been through so much.. Thank you for this post here. @tisonlyme143