I remember when I first found my Lady. I had only been here a few days when she was tellin’ me I was gonna go see the lady in the white coat for an operation. It sounded kinda scary, but she told me it would be alright. Anyway, when it was time, I just had to go take a nap at the vet’s office. WOOF! I came home and slept some more. It sure did make me sleepy that day, but by the next day, I was right as rain again and playin’! It weren’t no big deal, just like my Lady had told me. All of us pups have been spayed or neutered – I guess that’s what they call that nap at the vet’s office! Anyway, let me get my Lady to tell ya ’bout the benefits of spaying and neutering your pet. 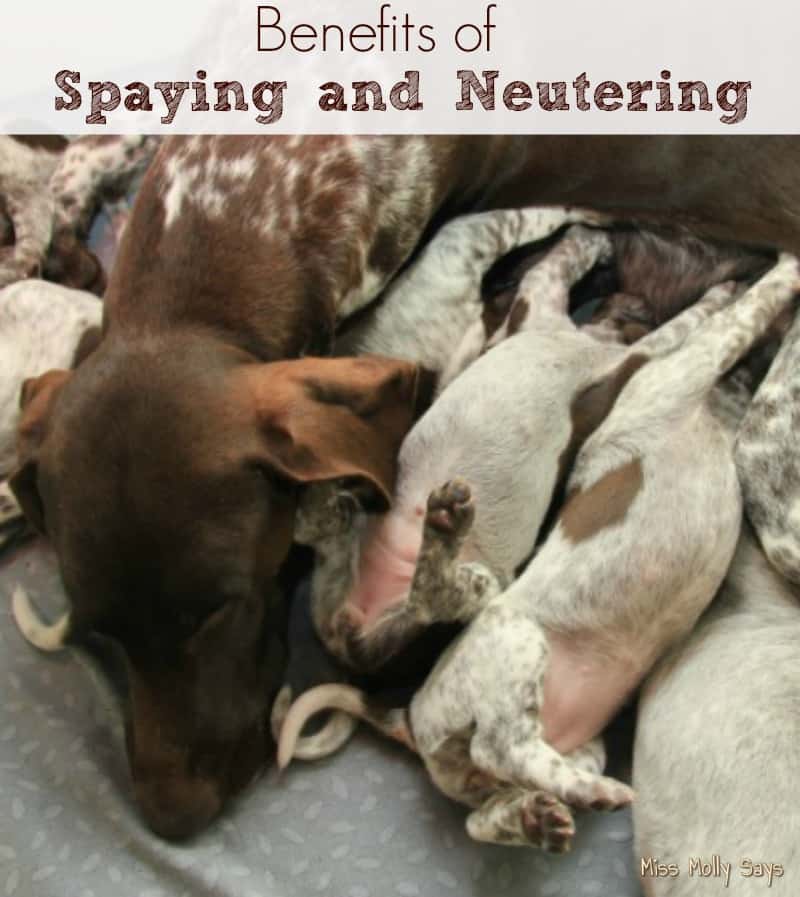 Benefits of Spaying and Neutering

If you are of a certain age, perhaps you had a grandmother that babysat you while watching Bob Barker on the Price is Right.  If so, you probably have a vivid memory burned into your mind of him closing every show with a reminder to spay or neuter your pets. Bob is long gone from the Price is Right, but his advice is still great if you love animals.

Every year millions of animals end up in shelters and many of these shelters aren’t no-kill shelters. Most unwanted pets come from uncontrolled breeding of a household pet let outside with a feral animal that happens to be near. A few months later, there are six or eight new puppies or kittens to try to find homes for – sometimes you place a few, sometimes no homes can be found and off to the shelter. Even if you can consistently find homes for all of the extra animals, frequent, uncontrolled breeding can have harmful effects on the female who bears the litters. This means extra risks to the health of a beloved family pet.

So what does it mean to spay or neuter an animal? They are both terms that refer to the surgical sterilization of an animal, spay in reference to a female, neuter for a male. Your vet can handle the procedure, with the animal placed under anesthesia to minimize the discomfort. Typically, your pet is released the same day as the surgery and will be groggy and probably sleep most of the next day or two. Your vet will fill you in on all the details. Follow the post op instructions carefully to avoid the chance of infection or other complications from the surgery.

After recovery, your pet will have a number of health benefits in addition to eliminating unwanted pregnancies. Sterilization reduces the occurrence of pyometra, a common reproductive disorder. In addition, in male dogs, neutering helps lower the chances of prostate cancer and will also reduce the tendency to search for a female in heat, making them less likely to run off. They will also usually become calmer and be much less territorial. In females, spaying before first heat helps lower the incidence of breast cancer in addition to keeping you from having to care for or find homes for litters of pups year after year.

In a nutshell, unless you have specific plans to breed a pet, there really is no reason to not have them sterilized – it’s cheap, it’s safe and it can help ensure that a beloved family pet is around for many years to come.

It’s important to spray and neuter your pets

Such a great article. Thank you for posting. I am so pro spray/neutering.

We didn't neuter my dog right away and he sprayed when he got older!! I was so annoying!! I wish that we would have. He's gone now but that spraying made us all nuts!

I agree that there are definite advantages to spaying and neutering. Thank you for sharing this article.