Sometimes a dog’s curiosity can earn him an unfortunate insect sting or bite. Other times just treading in the wrong place at the wrong time can bring on the wrath of ants, wasps, bees or spiders. The dog’s yelp or pawing at the face may clue the owner that his dog has been injured. Bug bites usually show up on the face or on hairless areas but can occur anywhere on the body.

The dog should be removed immediately from the area to prevent more attacks, as multiple stings are, of course, more dangerous. When a bee or wasp stings, it gives off a pheromone signaling other hive members to join the attack. While wasps can inflict more than one sting, bees sting only once, leaving their stinger in the site where it continues to release more venom. 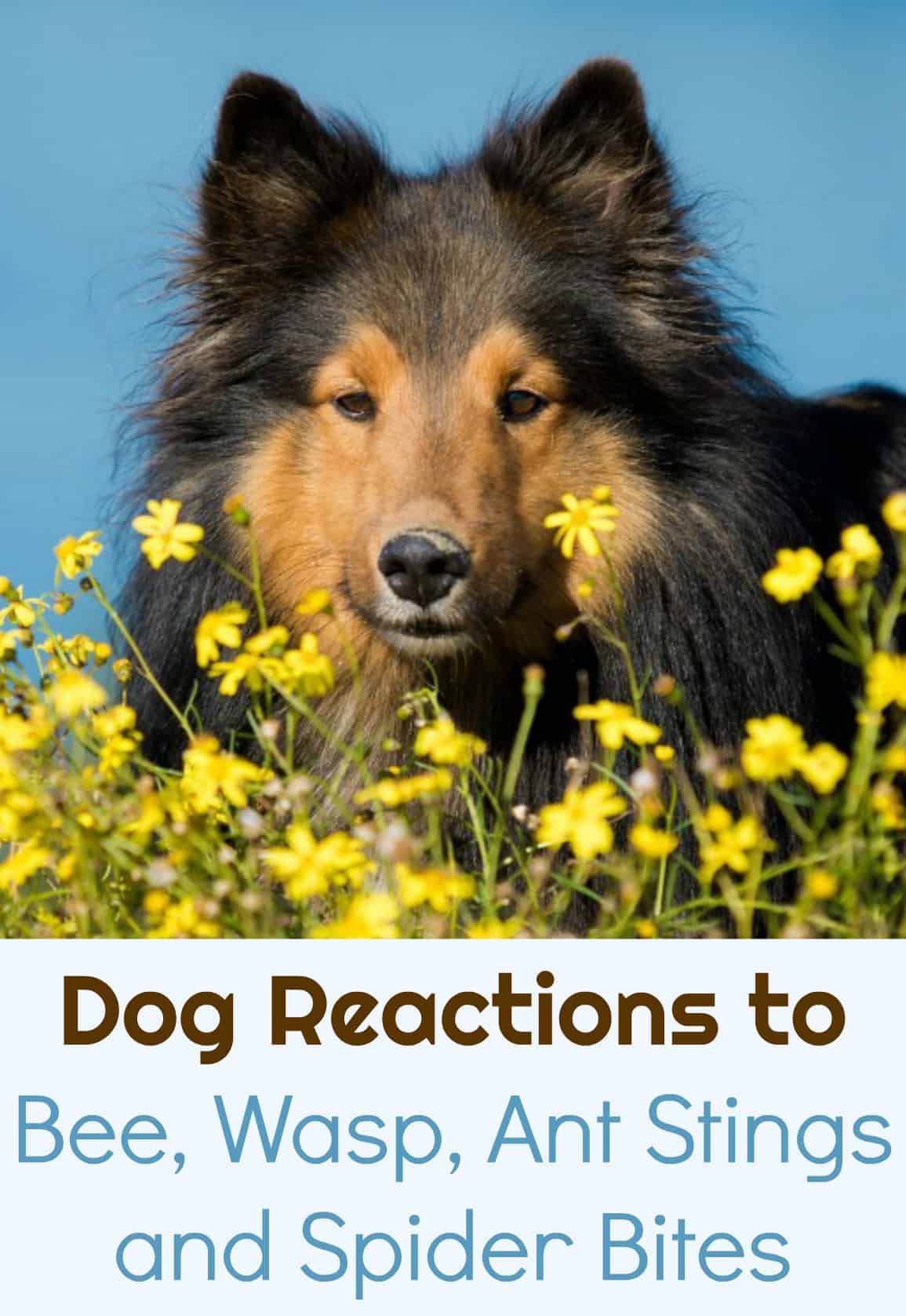 Most stings or bites cause only a mild reaction of swelling, redness and itching at the site but some can be serious. In rare cases, a dog may have a severe reaction to the injected toxin and go into anaphylactic shock, experiencing extreme swelling and inflammation, vomiting, drooling, diarrhea, breathing difficulty, and death. These cases require emergency veterinary treatment.

Multiple stings or bites, as well as brown recluse spider and black widow spider bites, require emergency veterinary treatment. Stings or bites to the dog’s tongue or inside the mouth cause swelling that can quickly block airways and should also be treated as an emergency.

How to Remove the Stinger

The stinger appears as a black spot in the center of the site and should be removed to prevent the release of more venom. First aid experts agree that removing the bee stinger with tweezers squeezes more venom into the tissues. The safest removal is done by scraping with a fingernail, credit card, or some other similar edge.

According to Vetinfo.com, wasp venom is alkaline based while bee venom is acid based. Wasp stings should be treated with vinegar compresses and bee stings are best covered with a paste of baking soda and water. Ice packs or cold compresses will provide relief from pain and swelling which usually subsides within a few hours or up to a day. The veterinarian may also suggest a dose of Benadryl appropriate for the weight of the dog or applications of 1/2% cortisone cream.

Most spider bites are not poisonous and will cause only inflammation at the site for a day or two, however a poisonous spider bite such as that of the brown recluse should be treated by a veterinarian. The poison slowly destroys tissue, resulting in a growing and hard-to-heal sore.

A black widow spider bite is very dangerous for pets, especially small ones. It can immediately cause pain, muscle tremors, muscle rigidity, respiratory failure, paralysis and death. A dog with access to black widow spider habitats, exhibiting these symptoms should be rushed to a veterinarian immediately. Do not use a tourniquet above the wound as it is not helpful and can hinder blood circulation to the area. A very expensive antivenin is available but supportive veterinary treatment can also be effective.

Some dogs, just as some people, are allergic to insect stings and can go into shock from the injected venom. The dog can very quickly experience breathing difficulties as airways swell. The dog may appear agitated, vomit, drool, and collapse. Anaphylactic shock is a life-threatening condition and must be treated as an emergency.

An Epi-Pen may be a good addition to the first-aid kit for a dog who has had a severe reaction to insect stings. This is an epinephrine (adrenaline) autoinjector for stopping an anaphylactic reaction. It’s important for the dog owner to discuss with the veterinarian exactly how to use the drug.

Other biting pests include fleas, ticks, mosquitoes, and flies. Mosquitoes also spread heartworms. Most insect bites or stings are not serious for most dogs but should be closely monitored for 24 hours, as they can potentially be serious or deadly, especially in puppies, older dogs, and small dogs.

The things one needs to know about owning a dog, I think I would be scared if my dog got bit or stung, I would take him immediately to the vets. @tisonlyme143

Good to be aware, with more invasive insects lately comes bites and injuries.. all pets should be looked after for those.

He do you know what kind of bit it is