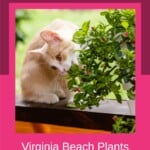 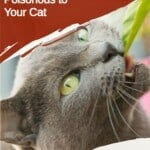 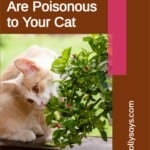 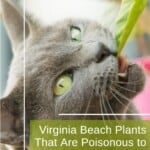 The diverse flora of Virginia Beach attracts many visitors every year. Some of these plants might look harmless, but can be poisonous to your cat.

Eating a poisonous plant can cause a variety of symptoms for your cat, ranging from minor irritation to the mouth up to organ failure and death.

Educate yourself on which plants to look out for both indoors and outdoors so you can avoid allowing your cat to eat them.

Learn what to do if you suspect your cat has ingested a toxic plant so that you can take action immediately and keep your four-legged friend safe.

There are dozens – if not hundreds – of potentially toxic plants in the Virginia Beach area, but the following plants are examples of some to keep an eye out for.

True lilies are by far the most dangerous toxic plants for cats.

Since lilies are highly toxic to cats, ingestion of any amount of any part of the plant, even the pollen, warrants emergency care.

Lilies are very common plants both inside and outdoors.

Be aware: it only takes a tiny amount to be potentially lethal to a cat, so it is important to be extremely cautious with this plant if your companion is a feline.

Simply drinking the water from a vase of lilies, or water that has been contaminated by lily leaves or pollen can make your cat extremely ill.

Oleander is a popular decorative shrub common in many areas of the United States.

The poisonous compound is in the sap, so every single part of the plant is toxic to cats, including the fruit, stems, root, and flowers.

Oleander can cause your cat’s heart to stop functioning properly when enough is consumed.

It can also affect the intestinal and neurological systems.

The most common form of oleander is Nerium oleander, but all species are toxic to cats.

Lily of the Valley

Lily of the valley is actually part of the asparagus family, but as a true lily, it can be dangerous for cats.

Even small amounts of this plant or water from cut flowers have the potential to cause fatal heart failure in a cat.

Autumn crocus is a flowering plant species that contains a molecule called colchicine.

Enough of this toxin can cause intense damage to a cat’s kidneys, liver, intestines, and gastrointestinal system.

It can sometimes take days for signs or symptoms to appear after consumption.

Azaleas are flowering shrubs that are so famous for their toxic nature that historically, to be gifted a vase of them was a well-known death threat.

The plant contains a type of grayanotoxin in its nectar and leaves.

If your cat ingests any part of this plant it could experience vomiting, abnormal heart rhythm, seizures, and even death.

Many species of yew are commonly used in landscaping and all are highly poisonous to many animals, including cats.

Every part of the tree or shrub is toxic except the covering on the seed.

The yew contains toxins called taxines and bioflavonoids which can be extremely harmful to your cat.

These toxins interfere with heart function and the most common clinical sign of yew poisoning is sudden death.

Foxglove plants contain the same compounds as lily of the valley.

As such, even a small amount of foxglove can cause heart failure in cats.

The seeds from the sago palm or cycad palm are extremely toxic, and ingestion of them is often fatal.

Even tiny amounts of castor beans contain enough of the poison ricin to cause seizures, difficulty breathing, coma, and death in cats.

Consumption of this plant can also cause oral irritation such as burning of the mouth and throat.

They are usually used outdoors for their ability to cover surfaces and grow quickly, but can also be utilized indoors for aesthetic reasons.

Fortunately, most cases of English ivy ingestion by a cat do not cause serious illness beyond some irritation to the mouth, vomiting and labored breathing.

Chrysanthemums are beautiful, stunning flowers that bloom in a variety of colors.

Because of their beauty, they are very popular among both home gardeners and professional landscape designers.

Chrysanthemums can cause vomiting, diarrhea, loss of appetite, and other gastrointestinal issues in cats although usually, these symptoms are usually relatively mild.

What to Do If Your Cat Has Eaten a Dangerous Plant

Most cats are curious and may nibble on plants in their exploration.

If you witness your cat munching on a plant that is known to be toxic, or one that you aren’t sure about, take action immediately.

Save any remaining pieces of the plant in a plastic bag so you can identify them later.

If your cat has ingested a known toxin, contact poison control.

If you suspect your cat may have been eating a plant, or you spot pieces of plant matter in their vomit, identifying the plant can help to determine the right treatment.

Keep in mind that even non-toxic plants may cause an upset stomach in cats when ingested.

Vomiting or diarrhea that results from an uncomplicated upset stomach typically resolves on its own without any specific treatment within less than 24 hours.

If your cat is ill beyond this time or is displaying other symptoms, then it may be time to contact a veterinarian.

Book an online virtual care appointment in Virginia Beach to assist you if your cat is recovering from poisoning or displaying unusual symptoms.