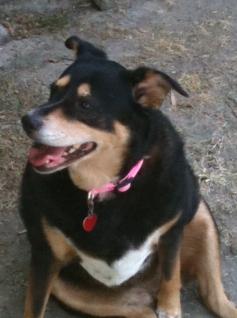 Well, seems Sallie stormed the vet’s office the other day! She hates goin’ there more than anything! She had to go for her yearly dog shots, heartworm test, plus a blood test to check her thyroid. She got put on some pills about six weeks ago cause she was havin’ some troubles. Did you know that pets can have thyroid problems too?

She had been havin’ some trouble bein’ so tired all the time. She was also sheddin’ really bad, gainin’ weight, and sleepin’ all the time. Anyway, about six weeks ago they tested her and it showed she had hypothyroidism. Boy, that’s a big ole word! Well, they put her on some medicine that she takes twice a day. Now, she is up and runnin’ again! She even comes out and plays chase with us! Now, that’s sayin’ somethin’ for Sallie!

But back to the story! While she was there to get her yearly shots and blood test, my Lady was gonna have her toe nails trimmed. Those are real ugly words to Sallie! She don’t like anyone messin’ with her feet or tryin’ to clip on them toe nails! My Lady has tried to trim ’em and can’t. They have tried twice before at the vets and couldn’t it get it done. It just wasn’t happenin’!!! But, them toenails were gettin’ way to long and startin’ to hurt her feet when she walked. Lemme tell ya, I was with her on one of them visits. They had four people tryin’ to hold her down! It still didn’t get done Woof! Woof!

Say what????? I mean come on! What’s with lettin’ ’em clip your toenails?! It don’t hurt none! I mean I am a redneck, but I’m also a girl! Ain’t we spose to like manicures? But, no not Sallie! So, they were gonna put her under anesthesia to get it all done. WRONG!!!! They had to muzzle her and hold her down (my Lady and Man, plus two of them) to try and give her the shot to make her sleep. First, they tried one front leg and the vein collapsed – whatever that means. Then they tried the other front leg and it collapsed. They couldn’t get the needle in the vein! Well, at this point they went for a vein in the throat! OH HECK NO!!

My Lady says they were all a holdin’ her and tryin’ to get the needle in. But, hey, if someone was a comin’ at your throat with a needle would you hold still?! Lemme tell ya – I don’t think I could it! In the end, they finally got the needle in there. BUT! Sallie is a fighter! She fought it off and never did go to sleep! They still had to wrestle her the whole way to get the blood work, the yearly dog shots, and the nails done. My Lady said all of ’em was worn out after that fight! But, they did it!!!!

Poor Sallie! If she would just be still, she wouldn’t have all that commotion and trouble goin’ on! Ain’t no wonder she’s so scared! The way she carries on, makes it worse on her. Oh, and what do ya know – she slept the whole way home and all afternoon when she got home Woof! Woof! That’s my sister Sallie for ya!

I just got done with my (2) dogs yearly shots. Now it's my kitty cats turn

I did not know that dogs could have thyroid problems. Thanks for the article.